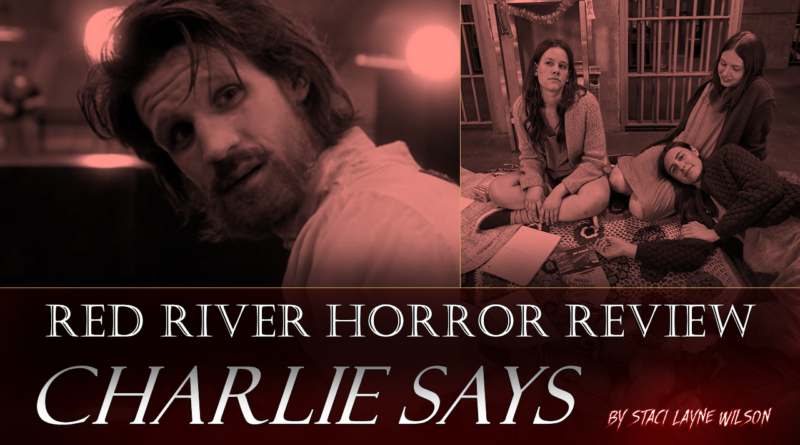 I don’t know why Matt Smith keeps getting cast in biopics portraying people he’s nothing like at all. A few months ago, I saw him in Mapplethorpe and while I loved the film I wasn’t swayed by Smith in spite of his bare-nakedly brave performance. Now he’s back in true-story mode in Charlie Says as murderous megalomaniac Charles Manson and while his acting is indeed faultless, he just can’t capture the “crazy eyes” even half as convincingly as Steve Railsback did back in 1976 in the TV movie Helter Skelter.

But this movie isn’t wholly about Manson. So, maybe all that doesn’t really matter. Charlie Says takes place in 1972 and focuses on three of his most loyal followers: murderous maidens Leslie “Lulu” Van Houten (Hannah Murray), Patricia “Katie” Krenwinkle (Sosie Bacon), and Susan “Sadie” Atkins (Marianne Rendon). What made these young women commit murder for an egomaniacal, egregiously sexist, hippie ex-con pied-piper wannabe musician? Cutting to the heart of the matter is Karlene Faith (Merrit Weaver), a graduate student who tutors inmates. In her sessions with them, Karlene sets about freeing the incarcerated girls from Manson’s brainwashing “to give them back themselves,” but she soon finds that’s easier said than done.

Director Mary Harron and screenwriter Guinevere Turner, the esteemed team that brought us the ultimate “glamorous serial killer” horror movie American Psycho (2000), are remarkably restrained here. Perhaps too much so… Charlie Says borders on the lackluster, but then again, maybe that’s the point: commune life on The Spahn Movie Ranch under the command of self-appointed messiah Manson was pretty damn dull (that is, when they weren’t planning vicious murder sprees or hosting The Hell’s Angels and rock stars). Their day-to-day was rigorously routine. The Manson “Family” were expected to gather dinner, drugs, and disciples for their leader while they themselves lived in squalor—and were made to believe they liked it.

In flashbacks we see some of what led to the so-called Crime of the Century and what is now considered to be the death-knell of the “peace and love” movement of the 1960s. There’s not an awful lot shown of the brutal murders, though what is depicted is harrowing and sympathetic to not only the victims of the killings but the victims of Manson’s despicable directives.

Not much was known back then about the ramifications of psychological and physical abuse, and the term “Stockholm syndrome” wasn’t invented yet, but it’s interesting to see the early attempts at research on these things through the (real-life) character of Karlene Faith. Even after his evil instructions have ruined their lives and ended others, the girls continue to happily croon: “We all belong to Charlie” and to quote his gospel beginning with two words: “Charlie says…” But little by little, the teacher starts to chip away at their armor and reveals what lies beneath.

While Charlie Says is slow-moving it’s also quite absorbing at times. Using a plot device similar to The Haunting of Sharon Tate (2019), we are shown a poignant “what if?” scenario of what might have happened at a certain crossroads in the life of Leslie. There’s a lot of attention to detail here, using many authentic locations and period-appropriate music. The cinematic style is more grounded-and-gritty than fans of Harron’s over-the-top American Psycho (and The Notorious Bettie Page and Lifetime’s Anna Nicole) might hope, which while in keeping with the tone of the film, it feels too lackluster.

In spite of the off-kilter choice of Smith as an uncharismatic Manson, the rest of the casting is solid. James Trevena-Brown as Beach Boys drummer Dennis Wilson does a good job of portraying a man who dangled his fame in front of The Family in order to get sex and drugs while giving nothing in return aside from the cachet of his presence. Fashion model and fearless actor Suki Waterhouse (The Bad Batch) is a standout as the cult leader’s longtime #1 girlfriend and mother of his son, Mary Bruner—who, lucky for her, was arrested and jailed for credit card fraud during the murder spree. Weaver (who was excellent in the TV series Nurse Jackie) does justice to the teacher who—unlike many working in the prison system who were advocates of the “lock them up and throw away the key” philosophy—truly wants to see her students learn something beyond the books they’ve been assigned to read.

Having said that, we as an audience don’t learn much beyond what we already know about the infamous summer of ’69 murders and those who committed them. Sure, it’s the 50th anniversary of the crimes and people are going to want to see this movie, but it feels like something of a wasted opportunity. Given the talent behind the camera, I would have liked less Manson and more about the women whose lives were reduced to a bloody mess. I would have liked to see stronger directorial style and a clearer point-of-view. But… I still liked Charlie Says, and give it a nod for genre fans looking for a slightly different take on this done-to-death story.