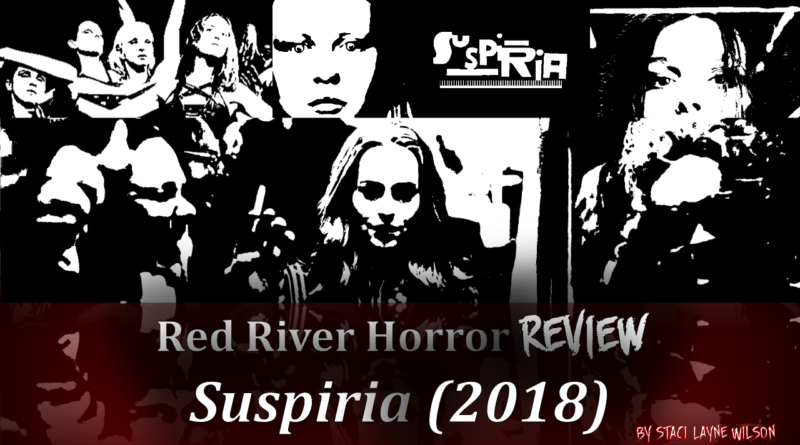 One of the characters in Suspiria says something to the effect that delusions are the truth presented as lies. The sole male character in the film, a therapist, is later berated for telling a young woman that her traumatic reality is only a “delusion” before sending her on her way, psychologically unarmed in a world of landmines. And everyone in the movie is wracked with awful nightmares… or are they premonitions?

Director Luca Guadagnino (Call Me By Your Name) has said that while he grew up as a fan of Dario Argento’s 1977 giallo, he wanted to reimagine it in the style of a film by auteur Rainer Werner Fassbinder. This makes sense, since the action takes place in Fassbinder’s native country. Guadagnino has accomplished his goal in some ways, but he has not captured or interpreted the visual panache of either Argento or Fassbinder (if you are not familiar with the latter, check out World on a Wire).

The basic skeleton of the story is the same: it’s 1977 and doe-eyed Ohio girl Susie travels to West Berlin to become a dancer and finds herself trapped in an isolated and imposing mansion that’s run by a coven of witches.

But in this case, screenwriter David Kajganich (A Bigger Splash) has added tons of backstory to the occultists and shown us where and how they live; made one of the students (Chloë Grace Moretz) a member of the radical Baader-Meinhof Gang; plus put in a long and completely unnecessary subplot about a therapist whose wife was killed by the Nazis in the 40s.

There is so much love lavished on the latter plot that it steals thunder from the dramatic and horrifying ending in the dance school by being given its own epilogue. Sadly, the blow of horror is softened by the bittersweet romance between the old man and his long-lost wife. Their story, not Susie’s, has the final word. (However, the curio factor is cool—Tilda Swinton, under prosthetics, plays the husband; while Suspiria 1977 alum Jessica Harper returns as his doomed spouse.)

Dakota Johnson (Fifty Shades of Grey) is Susie, while the more interesting actor, Mia Goth (A Cure For Wellness), is relegated to BFF status as Sara. Swinton plays three roles—the aforementioned male therapist; austere dance director Madame Blanc; and evil hag Markos (who looks like a cross between Jabba The Hut and Butterball from the Hellraiser movies). She is predictably excellent. Two others who shine in the film are Ingrid Caven (Ludwig – Requiem for a Virgin King) as Miss Vendegast, and Angela Winkler (The Lost Honor of Katharina Blum) as Miss Tanner.

There are some scenes of horror which are effective—the tandem danse macabre sequence, in which one performer’s leaps and pirouettes become another woman’s instruments of unseen torture as she is pulled into contortions of agony, is bound to be the most talked-about. The brilliantly-edited nightmare sequences are memorable, as are the random and shocking acts of hara-kiri. There’s a gory finale reminiscent of the one in Hereditary.

The ballet scenes in the original were nothing special, but the eerie soundscapes by electronica wizards Goblin were truly out of this world. In this version the dance sequences are everything. They’re interwoven into the fabric of the souls of the witches, which is splendid. Personally, I think the choreography looks like clunky Bob Fosse, but at least the steps have some spirit. There’s verve and anger in their feminist dance. Thom York’s score is not suspenseful, scary or memorable—some ill-advised vocal songs are thrown in as well.

There are some cool connections, showing that indeed the filmmakers are thoughtful and they do care about what they were creating. There’s the aforementioned Harper cameo; Caven was married to Fassbinder; Kajganich, Guadagnino, and Swinton have all worked together before; and a black dress Susie wears features the same floral pattern as the wallpaper in the original film.

If Suspiria 2018 had been made as a prequel or ‘inspired-by’ and using a different title, I would have liked it better. It is its own beast and it is an interesting, well-made one at that. But it is not Suspiria. It is a companion piece.

This twisty, cold, colorless remake of one of the most hotblooded, lush, and empty yet sumptuous films of all time, aims to make you think. The original Suspiria made you feel. When it comes to horror, I’d rather feel it. I would rather be immersed in that Grand Guignol psychedelic dream than be a bystander looking in through a window.