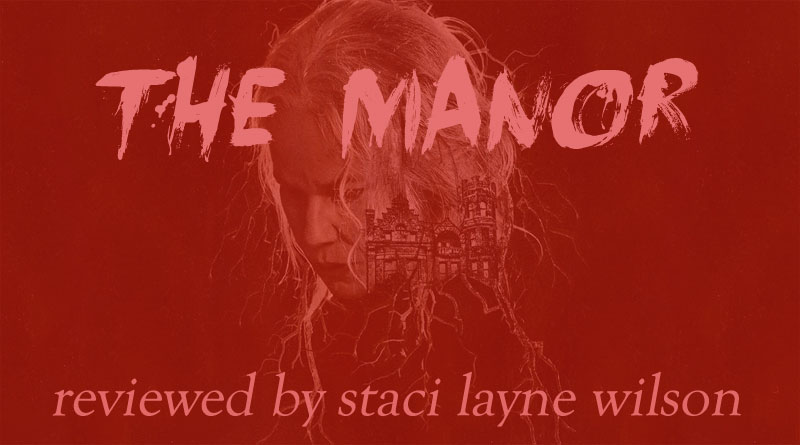 The Manor, written and directed by Axelle Carolyn (The Haunting of Bly Manor, Shudder’s Creepshow reboot), feels like a throwback to classic horror films in all the best ways. It is character-driven, it does not feature an assembly line of expendable teens, and it stars actors with true gravitas. In fact, two of the leads were in some pretty great horror films from bygone eras—Barbara Hershey starred in The Entity (1982), and Bruce Davison made a name for himself in the title role of Willard (1971).

Golden Sun Manor is a seemingly idyllic assisted living facility where its residents enjoy daily activities, lush grounds, and cozy dorms. Or at least, that’s how it seems in the brochure. When widowed 70-year-old former ballerina Judith Albright (Hershey) suffers a mild stroke and is willingly placed into the home by her well-meaning daughter, she soon begins to suspect that all is not well within the hallowed halls of the gorgeous gothic structure. Even though she makes a few friends and has one nice nurse, most of the staff treat her like she’s doddering and her roommate is highly disturbed. When Judith’s cell phone is taken away and she’s forbidden to leave the building without a constant companion, she confides to her grandson Josh (Nicholas Alexander) that something might be wrong. When a creepy creature begins to lurk in her room at night, she kicks the alarm into high gear. At that point, the gaslighting begins: it is not demons, Golden Sun Manor’s staff insists, it’s dementia. But what about Judith’s cohorts who are losing their minds… and their lives?

There is a distinct dollop of 1970s-tinged paranoia here, plus hazy nods to classic chillers like Suspiria and The Dark Secret of Harvest Home. Carolyn isn’t shy with the winks, giving eagle-eyed horror fans cameos from directors Mick Garris, William Malone, Mike Mendez, and even John Carpenter (in a vintage TV clip). Many of the characters wear clothing and accessories that celebrate the Los Angeles indie horror scene, and there are even a few lines of dialogue crafted especially for the perky ears of genre geeks. Having said that, The Manor does not feel derivative or tired—Carolyn’s own style as a writer and director shines through, feeling fresh and fun.

So, while there are a few homages of the scary cinematic days of yore, Hershey channels the role of Judith in a modern, relatable way—if she were playing a 70-year-old in an actual 1970s movie, she’d be a gnarled crone with one foot in the grave; in The Manor, she is attractive, active, and social media savvy—she’s a silver fox and GILF! Davison is also excellent, as expected, but he doesn’t rest on his laurels here. He imbues Roland with likability on the one hand, but also a bit of mystery. I’ve seen Nicholas Alexander on the TV series Good Girls, but am not really familiar with his work; he holds his own with Hershey and then some as the dubious but dutiful Josh.

The supernatural aspect is teased out at first, but there’s no shying away from showing the monster. Illusion Industries (Ouija: Origin of Evil) created a creature that is original and well-thought-out in terms of its origin. Since these Welcome to the Blumhouse films are not meant for hardcore horror fans, there is little in the way of guts’n gore or outright terror in The Manor.

The Manor is one of eight Welcome to the Blumhouse offerings to date—and it is by the far the best of the lot. Admittedly, the competition is not fierce—the series tends to be extremely heavy-handed in its “wokeness,” sacrificing spooky stories for important messages. While The Manor does have something to say about ageism, it is well-woven into the plot. The Manor feels more like a solid standalone without the Welcome to the Blumhouse series tag.

The Manor makes for an entertaining prelude to All Hallows Eve and comes highly recommended.