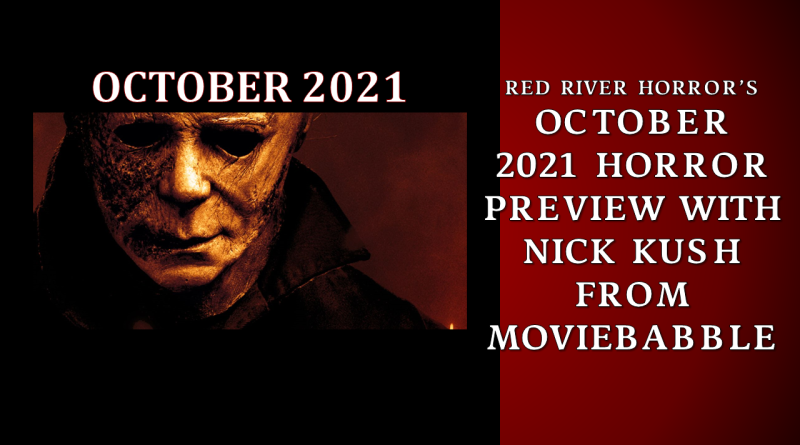 October is here! And while the month has always been a celebration of all things spooky, October 2021 appears to up the ante considerably with a wide variety of horror films across theaters and streaming services. Chaotic nightmares from auteur filmmakers, sequels to long-running franchises, and intriguing original stories — this month appears to have it all, with something new to look forward to just about every week.

Let’s a take look at what’s in store for us this month in horror:

Julia Ducournau’s Raw is perhaps one of the most exciting international debuts of the last five years. It had a clear vision with a distinct voice; immediately, Ducournau was tabbed as a rising star.

And what a better follow-up than a Palme d’Or winner! This year’s Cannes Film Festival was set ablaze by Ducournau’s second feature, Titane. More broadly, it has taken the entire festival circuit by storm with its shockingly gruesome and insane sequences. It even made a TIFF goer faint during the Midnight Madness screening.

Fainting, vomiting, excessive farting — you name it — is a bit of a tired trope in these festival news roundups of intense movies, but Titane truly seems to go for broke. I for one have shut out all details about the film to go in as blind as possible, and I recommend you do the same.

Titane will be released in theaters on October 1st.

The following week has yet another weirdo international feature, Lamb, coming to theaters. Set in the isolated Icelandic farmland, Maria (Noomi Rapace) and her partner discover a strange newborn in their sheep barn, and decide to raise it as their own. What follows is an atmospheric and oftentimes ridiculous meditation on motherhood and loss: Like Titane, the particulars of Valdimar Jóhannsson’s debut feature also fall into the “you need to see it to believe it” realm. Maybe not to the same gonzo heights as Titane, but you might benefit from knowing as little as possible going into your showing of Lamb.

Lamb will be released in theaters on October 8th.

After the sequel/reboot/reimagining that was 2018’s Halloween, the wait for its sequel, Halloween Kills, is finally over. Like its predecessor, Halloween Kills also seems to balance between forging its own path and offering up some fan service. The hospital scenes in the film’s trailer are very reminiscent of the original Halloween II, in which Michael Myers slashes up healthcare workers to get Laurie as she tends to her wounds.

The early word indicates Michael Myers will be doing plenty of killing this time around. For many, that will be more than enough.

Halloween Kills will be released in theaters and on Peacock premium subscription plans on October 15th.

Edgar Wright returns with another genre-bending feature in Last Night in Soho, which riffs on many Giallo films. Similar to Quentin Tarantino, Wright has always worked to recontextualize the films he loves and add fresh spins to them in his own, to mostly overwhelming success.

However, the reviews on Wright’s latest has been slightly more mixed this time around. Perhaps this time he couldn’t quite elevate the genre tropes beyond exactly that.

Last Night in Soho will be released in theaters on October 29th.

Many have been waiting for Scott Cooper’s Antlers for quite awhile now. The original plan was for it to release in April of 2020, but obviously, the universe had different plans. It was then quietly removed from Disney’s slate (they inherited the movie after their merger with Fox) with rumors swirling that they were shopping it to other distributors. But finally, a Halloween weekend release was confirmed.

In it, a teacher (Keri Russell) and sheriff (Jesse Plemons) discover that a young student may or may not be the child of bloodthirsty monster.

Antlers will be released in theaters on October 29th.

ANOTHER Paranormal Activity movie??? It’s a no from me.

But, for those who are a little more forgiving toward the franchise, the teaser does include non-found footage camerawork; is there a chance the 7th film in this franchise has a few new tricks up its sleeve?

Paranormal Activity: Next of Kin will be released on Paramount+ on October 29th.

Night of the Animated Dead – October 5th (VOD and DVD)

There’s Someone Inside Your House – October 6th (Netflix)