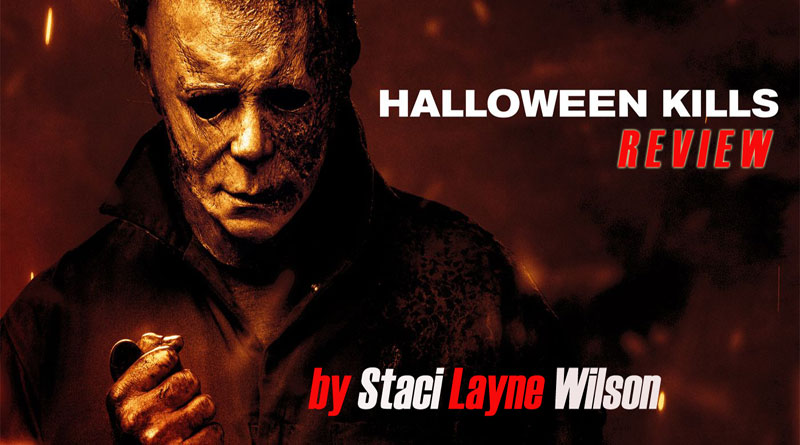 Halloween Kills lives up to its name—from beginning to end, there’s gore galore and a body count to rival the next world war. Fans of slashers will get an eyeful of eye gouges, throat stabs, gut ripping, bone breaking, and even an unflinching close-up of a surgical procedure.

Halloween Kills picks up right where 2018’s Halloween left off. Haddonfield, Illinois psycho serial killer Michael Myers (James Jude Courtney), emerges from the flames that supposedly consumed him last time and quickly carves up several firefighters before making his way back to the heart of the city, where he is intent upon stopping all the hearts he can skewer. Meanwhile, his long-suffering target Laurie Strode (Jamie Lee Curtis) is in the hospital with a serious stab wound, thinking that Michael is finally gone for good, destroyed in the fire that she set at the end of the 2018 reboot.

Of course, it’s soon discovered that the bad boy is back—and as he cuts a swath of gore throughout the town on what’s left of October 31, a hysterical lynch mob charges after him, armed with the proverbial torches and pitchforks. The leader of the bloodthirsty pack is none other than Tommy Doyle (Anthony Michael Hall), one of the few survivors of the famous 1978 attack that launched the franchise.

Director David Gordon Green returns for this sequel (part two of a planned trilogy; Halloween Ends is due next fall) as do much of the cast—Judy Greer and Andi Matichak are welcome returnees as Laurie’s daughter and granddaughter. But while the trio kicked ass in the last film, they’re more subdued this time around. Laurie is relegated to her hospital bed (understandably) while the town’s residents alternate between being the necessary cannon fodder and the aforementioned mob.

There’s never a dull moment, but there is not much in the way of a story and there’s little furtherance of the Michael Myers mythology. A few things feel thrown in to serve as social commentary—namely, the mindless mob’s insistence on going after an elderly, overweight transient that they “think” is Myers (there’s no way anyone with a half brain could mix them up); and a pair of gay characters who would be more at home in a Ryan Murphy series (I liked them, but they felt like they were in a different movie)—and those threads never really come together. Halloween Kills is more of a standard-issue slasher than anything, but at least it doesn’t skimp on the gore.

The music, by John Carpenter, his son Cody Carpenter, and Daniel A. Davies is in keeping with the 2018 Halloween and adds much tension and chills to the dark, creepy moments. Cinematographer Michael Simmonds also returns, and while the shots are well-lit, there is less of his artistry on display this time around.

One of the most entertaining and interesting aspects of Halloween Kills is the interspersed flashbacks to 1978 and 1963. We barely see babysitter Laurie, but we do get a fake Dr. Loomis (Donald Pleasance lookalike Tom Jones, Jr.) and we see Michael (Christian Michael Pates) as a young boy interacting with his doomed sister, Judith (uncredited). Kyle Richards, who was eight years old in 1978’s Halloween, reprises her role here as Lindsey Wallace, but it’s really more of a cameo. We also see the return of Marion Chambers (Nancy Stephens), and Lonnie Elam (Robert Longstreet, not in the original but the character is).

Overall, I was entertained and I liked the film despite its shortcomings. Since the 2018 Halloween served as a direct sequel to the 1978 movie and de-canonized all of the previous sequels, this is a decent addition as the interstitial installment—but here’s hoping that Halloween Ends makes up for the otherwise lacking storylines here.