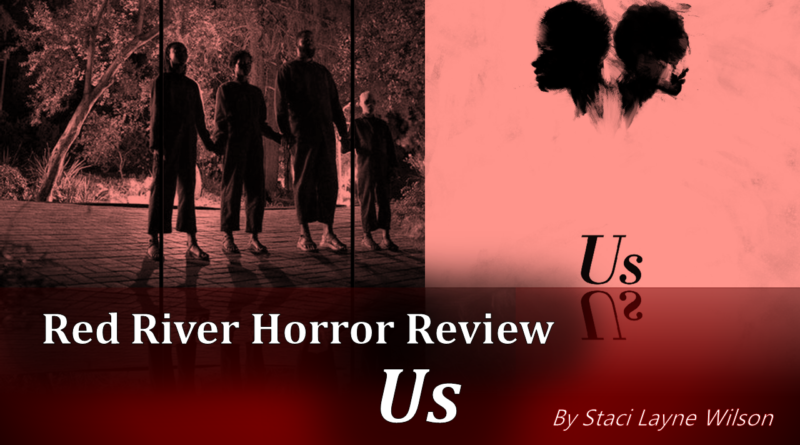 The idea of having an evil twin has been proven eerily effective in the horror genre forever. What could be scarier than an opponent who can effortlessly read your mind? Throughout the years, moviegoers have bitten their nails to The Student of Prague (1913), The Man With My Face (1951), Invasion of the Body Snatchers (1956, 1978), The Other, Sisters, The Stepford Wives (all from the 1970s), Mirrors (2008), Enemy (2013), and of course Jordan Peele’s Get Out (2017).

The recently-crowned master of horror Peele is again asking that we look in the mirror—at ourselves and at society—with his new thriller, Us. Once more acting as writer, producer and director, Peele shows us what he’s made of… and it’s scary. And funny!

The flick opens at a nighttime carnival in Santa Cruz in the mid-1980s (The Lost Boys, anyone?). Adelaide (Madison Curry), a little girl who’s out having fun with her parents decides to have even more fun by wandering off and going into a house of mirrors by herself. Or is she by herself? Cut to present day. Adelaide Wilson (Lupita Nyong’o) has a family of her own: goofy but loveable husband Gabe (Winston Duke), know-it-all teen daughter Zora (Shahadi Wright Joseph), and playful young son Jason (Evan Alex). Even though it appears she has it all—affluence, a great home life—Adelaide is ill at ease. Ever since she got lost at the carnival as a child, she’s been fearful verging on paranoid. Adelaide is not sure why she’s that way, since she was found within 15 minutes and was seemingly unharmed. Something bad must have happened, but she can’t remember. She’s mostly okay in life, but horror comes home when the Wilsons head to Santa Cruz for a weekend getaway.

The film focuses firmly on the main family, but there is another couple, The Tylers, who have a vacation home in the same coastal town. Elisabeth Moss (from “Mad Men” and who was in another mirror-image thriller, The One I Love) and Tim Heidecker (The Trial) are Kitty and Josh, and boy, are they annoying. Rich, entitled, alcoholic, and entirely self-absorbed. As you know they will, they die spectacularly and it’s quite the guilty pleasure to witness.

The violence in Us is brutal and sometimes shocking, but never gratuitous or gross. There’s serious spine-tingling suspense when the dastardly doppelgangers show up, but Peele releases a lot of that tension through genuine, organic moments of humor. There’s mystery, too—cleverly set up in the very beginning of the film as a series of strange clues: caged rabbits, Biblical references, the iconic 15-minute Hands Across America publicity stunt, and Michael Jackson’s “Thriller”. How will also those ostensibly disparate things add up? You’ll see…

All of the actors are wonderful, but it’s Nyong’o’s show. Playing two totally different central characters and having to be convincing as both prey and predator, she is a marvel and proves with outward effortlessness that she’s one of our best actors working today.

Us is well-directed and there’s never a dull moment. However, I did have a few issues with the screenplay. I can’t go into detail without revealing crucial plot points, but there are a couple of expository monologues that tie things up even neater than a witness at the end of an episode of “Perry Mason”. I’m not quite convinced by the sociopolitical double-entendres (at one point, the murderous, red-wearing twins explain who they are by blandly stating, “We’re Americans”), and there are a couple of dumber-than-usual horror tropes here.

Despite its minor shortcomings—the “sophomore slump” isn’t a cliché for nothing—Us is still a worthy and enjoyable follow-up to Get Out, and an enticing preview to Jordan’s upcoming reboot of The Twilight Zone.