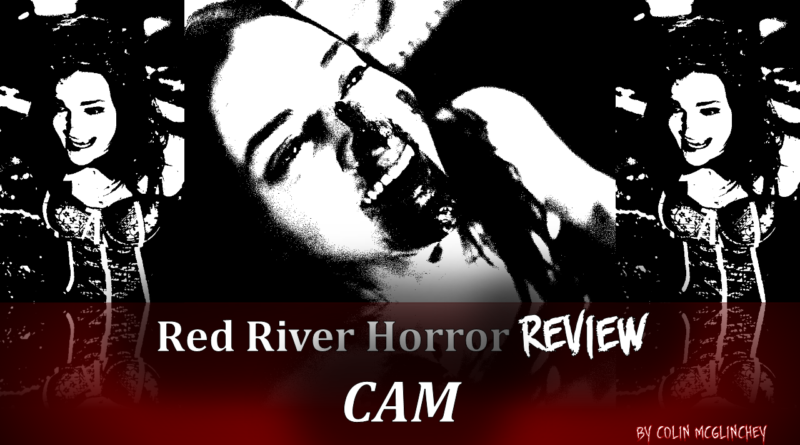 Cam is an identity theft thriller for a time when there’s no shortage of identities available to steal. Today, most people exist as one person in the real world and as a variant of that online. Often, those two entities couldn’t be more different, or vulnerable, each in its own way. Cam deftly explores this idea, tapping into perhaps the greatest, most basic fear of our always plugged in, always online society. What if one of those personas was suddenly, inexplicably wrenched from our control?

We’re all after some kind of validation online. Be it likes, clicks, or comments that read only, gloriously, “this” with maybe an arrow pointing up at something we wrote. For Alice, or as she’s known online: Lola (Madeline Brewer), validation comes in the form of rank. Alice/Lola is a cam girl. She makes a living acting out the fantasies of who frequent her chat room. If she loses their eyeballs to other cam girls, she also loses their wallets and her rank drops.

One morning, Alice/Lola finds herself locked out of her account. Somehow though, her account is still posting new videos. Videos starring her that she has no memory of recording. Cam doesn’t quite stick the land, but for two acts, it is a captivating mystery, one that will have viewers forking over their attentions just as Lola’s viewers fork over digital currency.

Along her quest for answers, Lola encounters scathing portraits of some of the Internet’s – and 2018’s – greatest human failures. There’s the young man who exploits Lola’s career to inflict pain on her family who (surprise!) gets a total pass for his actions. There’s the “biggest fan” who believes it is he, and not Lola, who has enabled her success. Oh, lest we forget the “nice guy” who thinks being a “nice guy” entitles him to something more from Lola. These charming characters feel almost certainly, regrettably ripped from writer Isa Mazzei’s experiences as a cam girl. And, unlike the unimaginable horror that awaits Lola, real examples of these folks are just a trip to the comments section away.

As mentioned, Cam loses steam a little bit in the third act. Props are due to Mazzei and director Daniel Goldhaber for resisting the urge to over-explain away their mystery. However, the pair spend so long building up a legion of red herrings that, when they finally reveal the source of Lola’s torment, it feels disappointingly under-baked.

Late game stumbles aside, the great success of Cam is its ability to take a movie about something as un-relatable to many as the relationships between cam girls and their fans and make it hit too close to home for even the most buttoned-up Internet denizens. At least part of the credit for that is due to Brewer, who admirably understated performance in the multi-layered lead role. She doesn’t just play Lola and Alice. As the film’s plot unfolds, more wrinkles and overlaps are added to each, creating a true internet rabbit hole. This necessitates Brewer slip into and out of the skins of multiple characters, all with their own motivations and perspectives, a task with which she succeeds brilliantly.

Cam is not a perfect movie, but it is kind of a perfect movie for 2018. It’s a soundly built and acted thriller with an incisive resonance given our current here and now. It will leave viewers even more certain that the internet is a scary place and not just because of what may lurk between the lines of code.