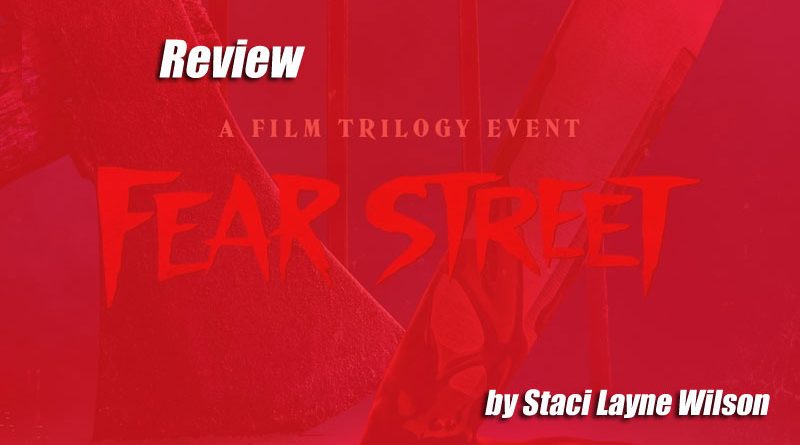 R.L. Stine’s Fear Street book series introduced a lot of kiddies to the horror genre in the 80s and 90s, so needless to say, there’s a built-in audience already for Netflix’s terrifying trilogy of feature-length films. The scenarios, all directed by Leigh Janiak, take place in 1994, 1978, and 1666 respectively. I have not read the books (YA is not my thing, and it wasn’t even when I was in that demographic) but it’s my understanding that the small screen version takes the horror way further—these flicks spare no gory detail, plus there’re f-bombs and underage sex galore. They really do play like classic slashers from the 80s and 90s—think Friday the 13th meets Scream in a dark alley.

Part One, set in 1994, sets up the story of Sarah Fier (“fear”—get it?), a 17th-century accused witch who lived, died, and cursed the town of Shadyside for all eternity. Ever since she was hung and buried, the small Ohio town has been known as “the murder capital of the United States.” Just across the tracks is Sunnyvale, its polar opposite and considered one of the richest and safest cities in the country.

The opening sequence takes place in a mall and follows the sudden, murderous rampage of a high school student who never showed any signs of violence before—it’s as if he’s been possessed. From here, we meet our core duo: Deena Johnson (Kiana Madeira) does not believe in the Fier witch, while her younger brother Josh (Benjamin Flores Jr.) spends his time researching the town’s history and eventually convinces her that the curse is real. Through Josh’s clippings on the Shadyside killings, they discover that C. Berman (Gillian Jacobs), a survivor of the Camp Nightwing massacre in 1978, died but was resuscitated. They try to find her to see what she knows about the curse, but she’s elusive. A few of their friends come along for the slay ride, but not all of them live to tell the tale. 1994 is a fun entry with several elaborate, gruesome death scenes that horror fans will recognize as homages to the classics, plus it has a killer rock music soundtrack including Nirvana, White Zombie, and Cowboy Junkies.

Part Two, set in 1978 and centered on Camp Nightwing’s night of carnage, is an excellent throwback to the golden (or crimson) era of the slasher. I enjoyed this entry more than the other two, mainly because of the era (again: the soundtrack rocks) and I liked the characters better. “C. Berman” (we find out her real name here, but for those who haven’t seen it yet, I won’t spoil anything) is a well-rounded, relatable girl whose sister is also attending camp. While the two couldn’t be more different, their familial love is believable onscreen. There are also some fun stereotypical characters, including the bullies, jocks, stoners, easy girls, and prom queens—not to mention a mom who’s reminiscent of Mrs. Voorhees. As the episode draws to a close, we learn even more about the curse of Sarah Fier and begin to question whether she’s truly evil or if she’s just misunderstood.

Part Three, set in 1666 and in 1994, ties up all the loose ends. The first half reveals the life and death of Sarah, with the best of the series’ cast in brand new roles and changes things up from the slasher genre to folk horror broiling with supernatural and satanic undertones. Some of the themes exploring the female couples’ sexuality from Fear Street: 1994 resurface in Puritan times and add some texture and nuance to the reason Sarah was accused of sorcery and witchcraft. There are lots of cool, creepy visuals here as the filmmakers play in Satan’s sandbox using religious imagery, dead flowers, rotting food, and animals driven mad by the strange magic dancing in the air.

Once Sarah’s story is fully told, we flash forward to the core 1994 narrative and pick up where Part One left us—which was in the middle of chaos—and unite Deena and Josh with C. Berman, who finally reveals her true identity. As shocking new revelations come to light, the trio (and a few others) set out to defeat the evil entity that haunts Shadyshade. The elaborate murder set-pieces and hard-driving 90s music is back for the conclusion, plus some fun Scream-style homages to the genre’s past.

Overall, I liked Netflix’s Fear Street trilogy. It’s way better than Hulu’s Into the Dark series, and beats Prime’s Welcome to the Blumhouse by a mile. Unlike those franchises, Fear Street is fun, irreverent, and while it doesn’t take itself too seriously, the creators clearly care about building the mythology and making sure the payoffs are not only satisfying, but gory as hell.

Check out the director’s Fear Street Playlists on Spotify here.