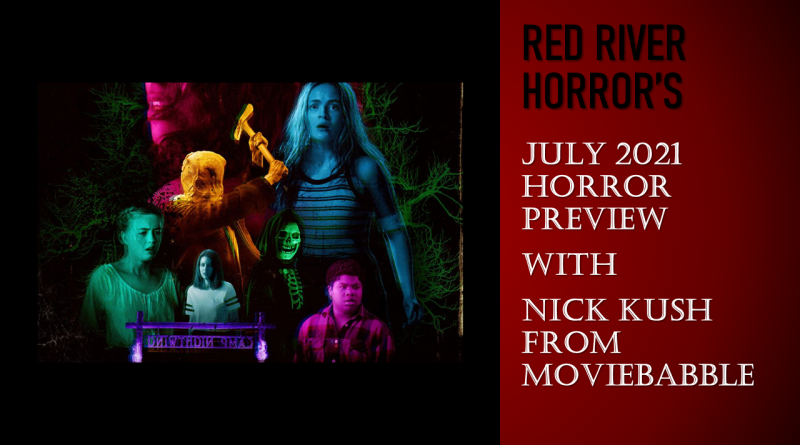 Ah summer, a time of great weather, vacations, and, more pertinent to this website, when masked killers begin their rampages in small towns and summer camps. It’s an old but nostalgia-filled formula that still works to this day. And thanks to Netflix, we get to see it once again in their trilogy of Fear Street movies coming to the service throughout July.

But luckily for us, there’s even more horror to look forward to this month:

The fifth and possibly last Purge film finally jumps the shark: now, the Purge is no longer a 24-hour event — many want it to continue on forever. Following the events of The Purge: Election Year, groups of Americans (mostly white supremacists) believe the way for them to thrive is to continue the bloodshed ad infinitum. A siege on a ranch in Texas ensues near the border as civilians attempt to flee to Mexico to get to safety.

The Purge has always been a ripped-from-the-headlines franchise (to varying degrees of success), so The Forever Purge is most likely par for the course in that respect. If you liked what came before, you’ll probably find some enjoyment here.

The Forever Purge will be available in theaters on July 2nd.

In one of its most innovative releases yet, Netflix is bringing R.L. Stine’s Fear Street book series to life in three movies releasing in three consecutive weeks. The first takes us to the year 1994, in which the town of Shadyside encounters a spree of gruesome murders — a regular occurrence in the town over the centuries. Conversely, neighboring town Sunnyvale is a proverbial paradise, where rich families live and crime is essentially zero. With the murders sprouting up once again in Shadyside, a ragtag group of teens must come together and save the day, while also learning more about the witch that initially cast a spell on the area centuries ago.

Fear Street Part One: 1994 will be available on Netflix on July 2nd.

Fear Street Part Two: 1978 takes us back to the last time there was a gruesome murder spree in — you guessed it — 1978! Because this is a nostalgic series, this installment takes place at a summer camp (obviously) where an ax-wielding psycho terrorizes everyone. This time, more secrets are revealed, including more about the witch’s curse.

Fear Street Part Two: 1978 will be available on Netflix on July 2nd.

2019’s Escape Room was the latest in a long line of “…but make it scary” horror movies. That is, a horror movie that takes a new fad and makes it murderous. Escape rooms became a thing in the 2010s, and it was only a matter of time before a movie turned them into death traps. The original Escape Room is just entertaining enough. Not all that scary, but there’s enough ingenuity in the puzzles to overcome the stupidity of everything else.

Escape Room: Tournament of Champions seems to do the same thing…only this time with people who were lucky enough to escape a previous string of traps. I’m not sure the phrase, “if it ain’t broke, don’t fix it” applies here since Escape Room was never that clever from the start, but hey, they’re running it back anyway.

Escape Room: Tournament of Champions will be available in theaters on July 16th.

And finally, the capper on the Fear Street trilogy goes all the way back to 1666 (isn’t that cute) to the origins of the evil witch!

Fear Street Part Three: 1666 will be available on Netflix on July 2nd.

I’m higher on M. Night Shyamalan than most. (Unbreakable is a personal all-time favorite.) Still, there’s no defending his run of Lady in the Water through After Earth. But he always has a knack for coaxing you back in with his high-concept premises. And damnit, Old looks cool. *insert Godfather: Part III Pacino meme here*

At a remote resort, a family takes a trip to the local beach, where they begin to rapidly age. Years pass in a matter of seconds. As with many Shyamalan films, the overall quality of Old will most likely rely on the third act — whether or not he chooses to concretely answer why this is happening or not and for what reason. Being a native Philadelphian myself, I’m willing to him another shot.

Old will be available in theaters on July 23rd.

The Boy Behind the Door – July 29th (Shudder)