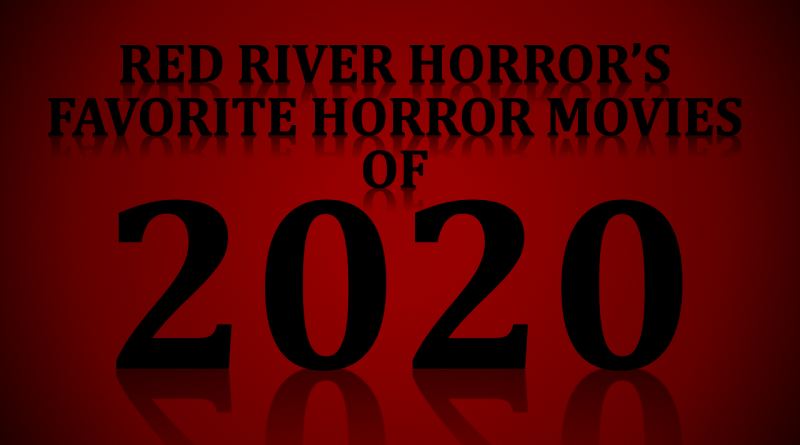 Last year was supposed to be the best year ever! The calendar was laid out perfectly as the holidays aligned to allow a hard-working public some simultaneous PTO days extending into long weekends. The economy was roaring and horror fans had a slate of independent and blockbuster films awaiting them splattered across the cinematic universe. Unfortunately, on Friday the 13th (March 13, 2020), it was discovered that the “shelter in place” orders were coming down nationwide to combat the coronavirus.

Some positives include the return of the Drive-In Theater and higher visibility for independent horror films because more people were on the hunt for content from the comfort of their couches. For a premium, film lovers could also watch the releases from the major studios that did receive a 2020 release. Streaming and VOD ruled the year, and here’s what the Red River Horror team selected as their favorites!

“The Invisible Man – a horror film that’s also a psychological thriller and a good film overall. Cinematography and special effects are outstanding and Elisabeth Moss gives an amazing performance.”

“The Wolf House is truly the most depressing movie of 2020. Based on the horrors that took place in Colonia Dignidad — a notorious Chilean colony founded by Nazis who fled Germany after WWII — along with demented spins on “Three Little Pigs” and “Little Red Riding Hood”, this multimedia animated film is 75 minutes of pure imagination and Lynchian nightmare. You’ll marvel at the work in every frame as different materials slither and morph into new entities as the film progresses in one single take, but also be entirely repelled by everything you’re seeing.”

“Relic hits home if your own parents are beginning to reach senior citizen status. This flick is straight forward and a slow burn that is a thrill with no unnecessary frills.”

“The scariest horror movies I saw were Possessor: Uncut and The Dark and the Wicked. But the one I enjoyed the most was the body swap horror-comedy, Freaky. Think: Disney’s Freaky Friday meets the classic slasher Friday the 13th and you’ve nailed it. Sounds like a pretty preposterous premise, but Freaky works 100% in its melding of clever comedy with white-knuckle horror.”

In 2020, Melissa and I watched every newly-released horror movie together in our living room with our dog Pumpkin. Usually we would each get our own column, but it was a unanimous decision in our household this time. The Invisible Man wins the day.

Leigh Whannell did an outstanding job as writer and director bringing The Invisible Man into the second decade of the 21st Century. This film could have been a corny, mindless cash grab with a big name attached to it as Universal has continually struggled to modernize it’s monsters. Instead, there are real moments of terror and action with impressive visuals and strong performances from all of the actors involved.