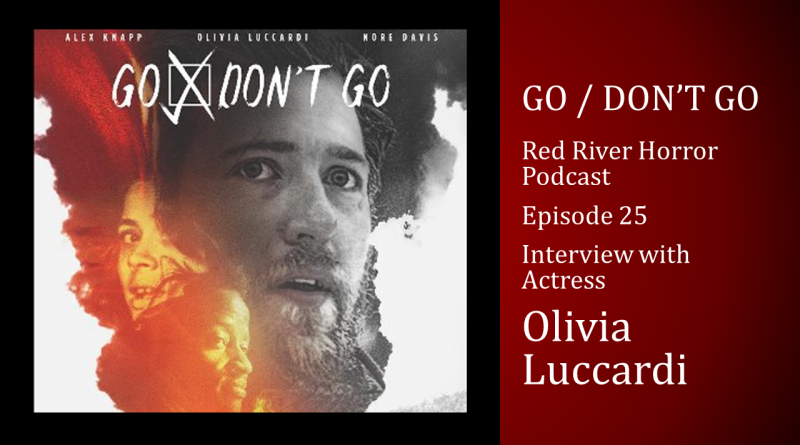 Olivia Luccardi is one of the stars in GO/DON’T GO — the latest psychological thriller to hit Digital and Cable VOD platforms on January 12, 2021. Luccardi checks in from the West Coast to talk to the Red River Horror team about the new film in episode 25 of the RRH podcast.

First-time filmmaker Alex Knapp writes, directs and stars in GO/DON’T GO. Knapp’s film is described as a “post-apocalyptic psychological thriller, oscillating between a forgotten love story and inescapable paranoia.” Luccardi provides some insight as to why this film is so timely in the world we’ve been living in over the past nine months.

SYNOPSIS: After an unknown cataclysm, Adam (Alex Knapp) is alone. The sole inhabitant of a vacant, unchanged world, or so he thinks. While attempting to stay grounded in the desolate landscape, visions come to him—the fateful night his best friend Kyle (Nore Davis) introduces him to the love of his life, K (Olivia Luccardi). As Adam’s mental state starts to unravel, he is plagued by lingering questions and uncertain realities about his world. His grip on what’s left starts to slip away—sending him spiraling towards a series of unforeseen consequences and unexpected truths.