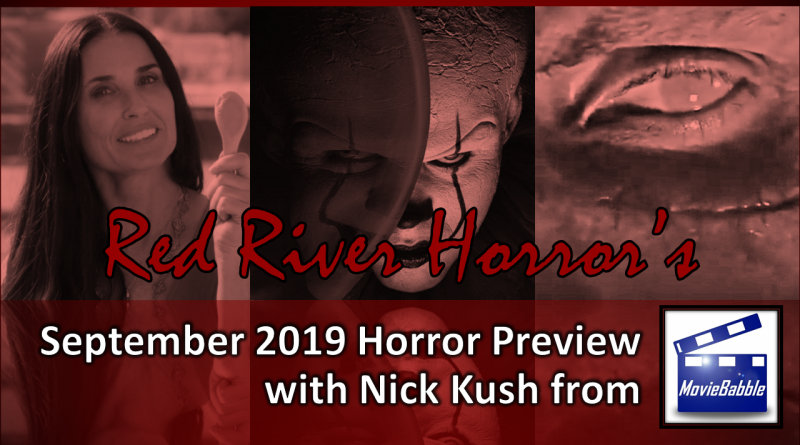 We’re officially into September, meaning that we must leave all those summer feelings behind and prepare ourselves for the beginning of the fall movie season. The days will begin to become noticeably shorter and colder, as if they’re begging you to head to your local movie theater, sit down, and enjoy a wonderful horror gem in the cozy indoors. This is especially important for the first weekend of the month as a highly anticipated sequel comes to theaters.

Let’s take a look at the September 2019 horror preview:

IT Chapter Two is upon us. Pennywise is back and ready to feed after a 27-year hiatus.

There’s a strong possibility that this sequel will stick the landing. Director Andy Muschietti has already been tapped to direct the upcoming Flash movie from Warner Bros., indicating that WB is very confident in his abilities to helm large projects.

What’s even more fascinating is that IT Chapter Two will clock in at about two hours and fifty minutes. Because of the length, my guess is that Muschietti and Co. will be dipping their toes into the stranger sides of the IT source material, meaning there’s a strong possibility that we get to see a space turtle!!! Or, on the contrary, if this nearly three-hour movie doesn’t have a space turtle or dark universes, I’ll be very disappointed.

The IT novel is often considered one of the more sprawling, provocative, and borderline sloppy works from Stephen King, so if IT Chapter Two can distill its pieces into a streamlined, coherent melding of insane imagery and interpersonal drama, we may be on the cusp of something wonderfully bizarre with this sequel.

Following IT Chapter Two is an indie film in limited release, Depraved. The film from IFC Midnight is a modern spin on the classic Frankenstein story, where a man is once again created from spare parts. The twist here is that the film takes place in modern times, allowing the themes of the classic Mary Shelley story to receive a bit of a facelift.

Conceived and directed by horror icon Larry Fessenden, the film is considerably low-budget, but makes up for it with a strong grasp on the meditative heights that this kind of story can entail.

Currently sitting at a 95% on Rotten Tomatoes, Depraved might be the next indie that you can impress your friends with by seeing.

The following week includes another indie, only this one has a few more prominent names behind it.

From director Patrick Brice, the man behind such films as Creep, Creep 2, and The Overnight, Corporate Animals is a horror comedy starring Demi Moore, Ed Helms, Jessica Williams, and Karan Soni. We’ll follow along as a company heads out on a team-building exercise retreat that goes horribly wrong.

Demi Moore stars as the CEO of a start-up, setting up the archetype of the way-too-eager business leader. She sends her firm to the deepest cave systems of New Mexico because, if they can navigate them, they can “navigate the challenges of today’s business environment.” Naturally, they get trapped within the caves and must find a way to get out — even if that means resorting to cannibalism to survive.

The film reminds me of Office Space as it lampoons business culture to the nth degree, and it might be exactly what those looking for some genre-bending fun might need.