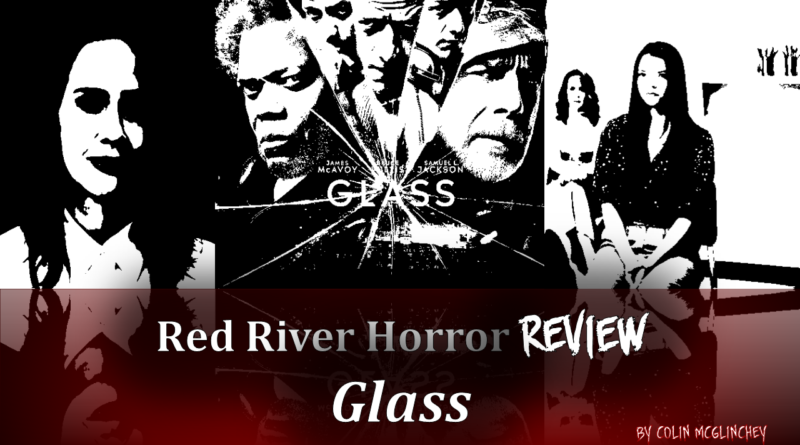 Glass is the final chapter in M. Night Shyamalan’s nearly two-decade long dissertation on comic books and our inherently human struggle to find purpose. It’s the full realization of the cinematic universe he teased in 2016’s Split, when, like a grizzled time traveler from Shyamalan’s personal golden era, David Dunn (Bruce Willis’ character from 1999’s Unbreakable) teleported in to mug his way through a surprise mid-credits scene. Glass picks up not long after that.

Dunn – a gloomy synthesis of Clark Kent’s mild-mannered nature and Superman’s indestructibility – is in pursuit of The Hoard, a collection of murderous personalities inhabiting the body of one man, Kevin Wendell Crumb (James McAvoy). In between films, The Hoard has been kidnapping and murdering young girls to feed The Beast, a newly emerged persona that can alter Kevin’s body, imbuing him with superhuman abilities. The two men literally bump into each other early on, hinting at the kind of physical confrontation superhero cinema thrives upon. This clash is interrupted by Dr. Ellie Staple (Sarah Paulson) who – with the support of a team of police officers – subdues both men and drops them in a mental institution. There we meet another of Staple’s patients, the near-catatonic Elijah Price (Samuel L. Jackson), a criminal mastermind with bones like glass we first met in Unbreakable. Staple, it seems, has an almost preternatural understanding of the comic lore each man has wrapped himself in – and dedicates herself to freeing them of what she views as a psychosis.

In short, Glass is busy as hell. Probably too busy. The idea that these are three emotionally shattered men who’ve filled in their psychological cracks using comic book mythology is plenty. Shyamalan has a much grander vision in mind, only he chooses to execute on it too late. Rather than build it gradually, over the course of his film, he presents it late in the third act, as one of his patented twists. It’s another great idea in its own right. However, it requires a good bit of explaining, which results in Glass ending but not really ending multiple times as Shyamalan scrambles to make sure viewers get it.

It’s the newcomer, Dr. Staple, who suffers the most from the expansive scope of Glass. Paulson turns in an admirably blue collar effort, dutifully presenting Shyamalan’s bananas plot points and theories to the other characters and the audience. Then, as the script dictates, she’s forced to fluctuate between knowing everything about her patients to being a downright crummy doctor.

If Glass has a superpower, it’s McAvoy, who attacks every scene with an almost animalistic zeal. Within a single scene, he’ll bounce between half a dozen or more characters, always walking right up to the edge of too-much, but never falling in. The film’s other great strength is nostalgia. Unbreakable was ahead-of-its-time brilliant, an incisive deconstruction of a genre that wouldn’t even reach its own final form until almost a decade later with the birth of the Marvel Cinematic Universe. Revisiting its world, hanging out with Dunn and Price – and more heartbreakingly, a young Price and his mom – is such a treat, even if all the comic book psychology felt a lot fresher back in 1999.

Given the unique success of the two films that preceded it, it was clear Glass had large tights to fill. Despite the heroic efforts of McAvoy in particular, it does come up somewhat short. Still, Shyamalan’s latest is an appropriately offbeat, occasionally confounding conclusion to a trilogy never destined to follow the rules.