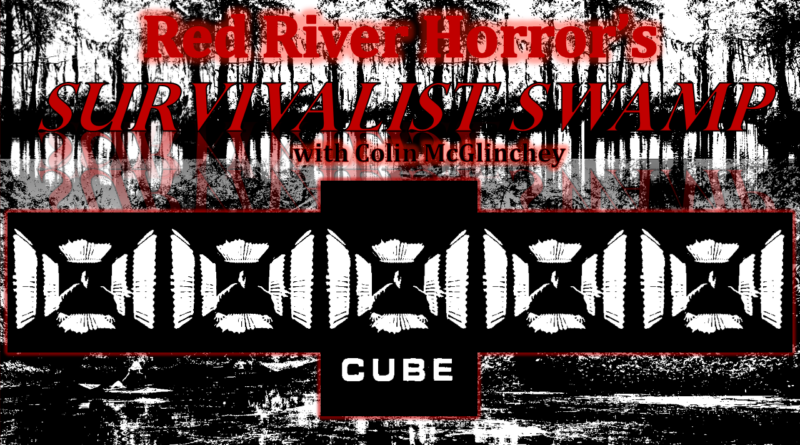 Armchair quarterbacking is as much a cherished horror tradition as the dark and stormy night. In this regular feature, we will provide too-little, too-late survival advice to dearly departed characters from the genre’s favorite films in the hopes of lowering mortality rates in subsequent sequels. This time, we review lessons learned – both math-related and otherwise – from 1998’s CUBE.

Picture this: You wake up alone in an empty, windowless room. You’re bathed in red light. Naturally, you don’t know where you are or how you got there. On each of the room’s four walls as well as its floor and ceiling is a mechanized door that leads to other rooms, almost identical to the one you woke up in except for the lighting scheme.

Welcome to 1998’s Cube, a high-concept forerunner of the Saw franchise that welds dense conversations about mathematics onto some good old fashioned low budget splatter. See, as you’ll come to find out should you attempt to explore the surrounding rooms in search of a way out, some are booby trapped. The only way to know for sure which rooms are safe and which ones aren’t is to crack a numerical code imprinted outside of each door.

If solving complex math problems while under duress isn’t your thing, then the set up for Cube can sound downright un-survivable. But there’s good news! The people who put you in there, whoever they are (OK, probably the government) want you to make it out alive. They really do and they’ve given you everything you need. Each piece of that puzzle is a person and they’re all scattered about the structure, just as lonely and confused as you are. Find the others, form a group, and you’re gold!

Don’t believe me? Let’s look at who woke up in the first Cube. There’s Kazan, a young math genius with fairly severe Autism. Kazan can handle the numbers no problem. The rest of the survival business? Not so much. Luckily, he has Holloway. Holloway is a fierce defender of underdogs. Without her, there’s a good chance Kazan never would have lived long enough to show off his math skills. Why not? Well, because Quentin almost certainly would have killed him. Quentin is a natural leader who keeps the group moving forward. His fiery temper, however, is a constant threat, one that could ultimately doom the group.

Also hanging out in the cube is Leaven, a talented mathematician who, while not up to Kazan’s level, can translate the problems to the rest of the group (and home viewers) in plain-ish English. There’s also Worth, a guy with insider knowledge of the cube’s construction and Rennes, an escape artist able to impart a few essential survival skills upon the group.

Each of the characters is there to serve a specific purpose. Each one brings a vital skill to the group. Only by combining their various specializations can they ever hope to survive. However, there is one other person inside the cube, one who never has a chance to glom onto the group. Let’s talk about Alderson.

Alderson isn’t with us long. He dies during the film’s cold open after bumbling into a room containing that surprise razor wire screen. We don’t know anything about him other than his name. It stands to reason that his inclusion, like his fellow cubers, wasn’t random. Given the clear need to have someone to play a check to Quentin’s temper, it also stands to reason that Alderson was meant to find the others and fill that role. Perhaps he was a psychologist. Perhaps he was an even better shouter than Quentin. Whatever the case — by carelessly dying — Alderson substantially hindered his fellow captives’ ability to survive the cube by denying them his mysterious, yet crucial, skillset. Talk about selfish.

So, what should Alderson have done other than not die? First, move a little more carefully, guy. It’s not just your life on the line here, you’ve got a whole crew depending on you. While going slowly from room-to-room in search of the others, he should also have thought about what he was bringing to the table. Leadership? Heart? Something else? Finally, Alderson should have remained positive. His captors (the government) totally wanted him to make it out alive. After all, they put him in the first Cube and not the structure from Cube 2: Hypercube. Then you’d be toast.