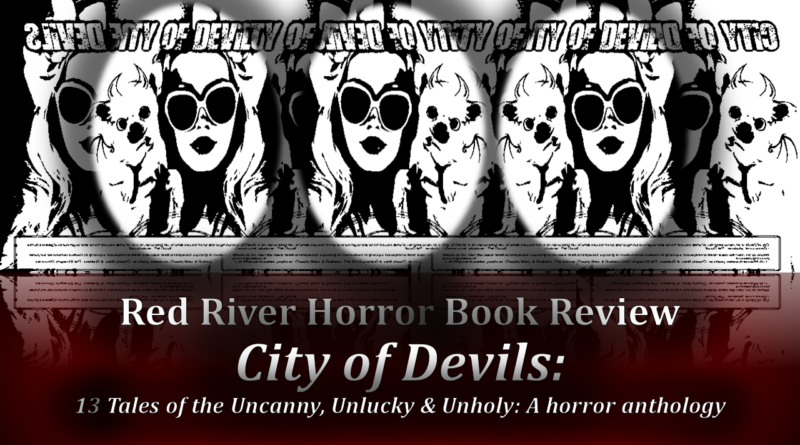 When I was offered the opportunity to review Staci’s latest literary offering City of Devils, I think I said, “YES!” before the question was fully formed. I’ve been a fan of Ms. Wilson’s work since “Ghost Writer” (wowsers, has it really been 14 years since it came out?), and she has continued to amaze and astound me with each new publication.

It was hard to pick favorites out of all the wonderful offerings, but I decided for the purpose of this review to just focus on a trio of tremendous tidbits out of the thirteen.

My favorite and least favorite of the collection is the vignette –

It’s my favorite because from the very first sentence I was hooked. The conversational tone immediately drew me in, then as more details were revealed, my brain started going crazy, imagining all sorts of reasons behind this clandestine clubhouse. I was torn between the urge to read it as fast as possible to see how it all fell out, but wanting to savor it slowly, enjoying all the little nuances along the way. I compromised by tearing through the first read, then taking my time through a second.

It’s also my least favorite because when I got to the end (both times), while it was completely satisfying as far as story resolution goes, I was wicked disappointed – I wanted more!

My next favorite is –

Imagine the Brothers Grimm got together with Stephen King and had a literary baby. This spooky seaside tale has an awesome old school fairy tale vibe, combined with a healthy toke of modern horror.

Rounding out the trio is –

The Case of the Butchered Bombshell

This hardboiled, Neo-Noir-ish tale is a gorgeous bit of a classic hard talking detective, but instead of a femme fatale, we are given a medium Mellie. Set at some point in the 70s, it’s a wonderful, atmospheric bit of murder mystery with a healthy dollop of horror.

All thirteen tales share that uniquely Hollywood hometown atmosphere that Staci imbues with such skill. From the character of Howard Wexler (who reveals himself to be the fictional twin of a real life scumbag), to Alice (representing the bazillion of young girls who move to Hollywood to be discovered), there is that common Hollywood insider thread that weaves them all together.

If you like your horror smart, sexy, and savage, this is definitely the anthology for you!

Traci York
Wordsmith. Witch. G33k. Shutterbug. Steemian.
I have many haunts on the interwebz. My main hangouts are my Steemit blog, and my WordPress site.