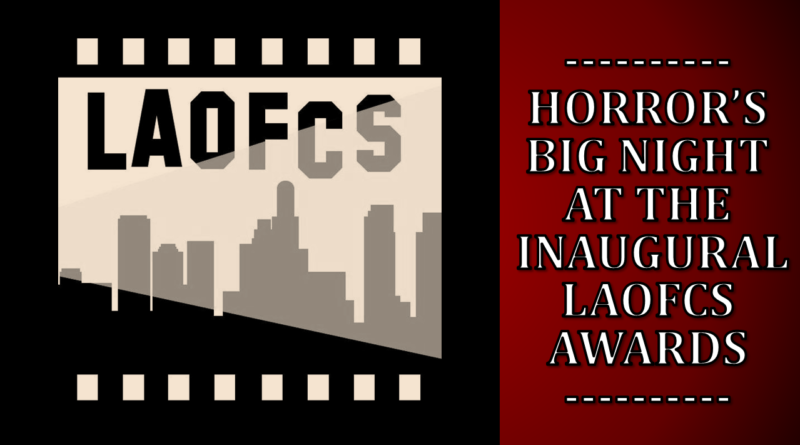 Hollywood largely recognizes the monetary side of horror films.  See Blumhouse Productions’ releases since 2009.  What the critics in LA usually forget to recognize is the outstanding work put forth by the creators of horror films.  On Wednesday, January 10, 2018, the Los Angeles Online Film Critics Society (LAOFCS) put an end to that lack-of-recognition at their inaugural awards ceremony at the Taglyan Complex in Los Angeles, California.

Out of 10 nominations for Best Picture, two were horror films: Get Out and The Shape of Water.  The Shape of Water, the latest feature from renowned Mexican filmmaker Guillermo del Toro, notched an incredible four victories, including the LAOFCS’ top prize for Best Picture.  The other three awards the film collected were for Best Actress (Sally Hawkins), Best Male Director (Guillermo del Toro) and Best Score (Alexandre Desplat).  While del Toro’s work is always open for debate as to what genre it falls into, there is no doubt the director of Pan’s Labyrinth and Crimson Peak can bring some serious visual horror to the screen.

Only one award shy of Water, Get Out was another major winner at the LAOFCS Awards.  The film’s writer/producer/director Jordan Peele won Best Original Screenplay and Best First Feature, while nabbing the Best Sci-Fi/Horror film crown.  Among Sci-Fi/Horror genre heavies like Blade Runner 2049 and Andy Muschietti’s IT, that kind of recognition proves how impactful Get Out was to the top online film critics in the home of motion pictures.

In early December of 2017, a total of 25 categories were announced for the LAOFCS Awards, with more than 40 films vying for awards both in and out of their respective genres.  Horror films were represented in 15 categories (including its own), accounting for a total seven films.  With that kind of showing among LA critics at a non-horror event, expectations for the genre are exceptionally high for 2018.

Best Picture: The Shape of Water

Best Visual Effects: War for The Planet of the Apes

Best Sci-Fi/Horror: Get Out

Best Actor or Actress 23 and Under: Saoirse Ronan, Lady Bird

Best Visual Effect Performance: Andy Serkis, War for the Planet of the Apes