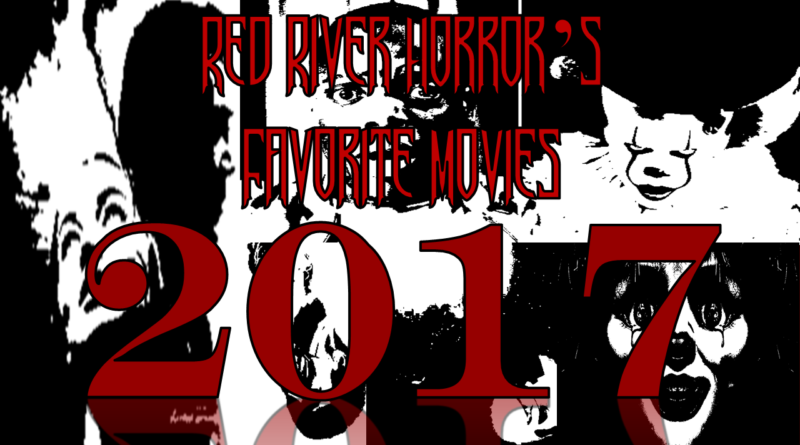 It is no secret that the horror genre was dominant last year.  A famous clown’s return to the silver screen was the most anticipated moment of the year, while a comedian put the genre on-notice early with his explosion into the hearts and minds of critics and fans.  And finally… one Philadelphia filmmaker delivered a true return-to-form.

With all of the other horror-specific websites and movie critics publishing their selections, it was time for the Red River Horror team to release their picks.  Let the controversy begin!

This was a tough one to call, but I’m going to go with mother! Yes, it was strange and artsy, but isn’t that at the heart of some really great horror? When there are thousands of spooks chasing some ditz with a camera or another group of teens having a boozy sex parade that leads to their death, mother! is this refreshing and thoughtful tale that spirals out of control to one of the most intense endings, leaving those that care to finish it much to talk about. Strong performances, effective cinematography, and a wild story are all I needed to get me away from the expected.

Christopher Sneed is the Director of Programming at the FLY Film Festival in Enid, Oklahoma.  While contributing to Red River Horror, he also maintains his own blog at https://adollarshortblog.wordpress.com/.

The bar for horror in 2017 was set very high, very early when Jordan Peele’s directorial debut Get Out hit theaters in February. Ultimately, despite strong pushes from allegorical tales about beleaguered housewives and romantic dramas featuring humanoid fish gods, Peele’s sharp as nails social satire would not relinquish its crown. Instead, the horror newcomer proved that, once again, the genre is so often at its best when it’s forcing us to come face to face with truths we would prefer not to acknowledge.

When he’s not watching his beloved Philadelphia Flyers, Colin McGlinchey provides reviews for Bloody Good Horror.  He is also the author of the King Township Fitness monthly newsletter.

The Killing of a Sacred Deer

The Killing of a Sacred Deer defies the usual classification of a horror film with its bizarre plot and execution.  Yorgos Lanthimos uses his patented dialogue cadence to make the characters feel like robots, causing the viewer to feel all the emotion as they become dumbfounded by the film’s incredibly depressing nature.  Dark, weird, and shockingly funny, The Killing of a Sacred Deer is the most singular movie experience of 2017.

A current college student at the College of William and Mary, Nick Kush founded MovieBabble in October of 2016 in order to share his no nonsense take on film. His love for horror began with A Nightmare on Elm Street as kid and has scarred him ever since.

The Shape of Water

The Shape of Water – Guillermo del Toro’s dark fantasy has its, well, “dark” moments, but it’s one of the most hopeful and romantic movies he’s ever made. The Shape of Water is resonating with people for different reasons–whether you want to glide on the surface story or dive into the deeper allegories, this horror movie is truly thought-provoking and scary.
As a freelance entertainment reporter, Staci has worked for AOL/Time-Warner, HGTV, The SyFy Channel, Yahoo! Movies, Fangoria Magazine and Dread Central.  She is also an award-winning author and filmmaker based in Los Angeles, California, and the lead film critic for Red River Horror.  Visit her official website- https://www.stacilaynewilson.com/

My favorite MOVIE of 2017, hands down, was M. Night Shyamalan’s Split. Everything about it was perfect. However, while many have considered it a horror film, I place it among my favorite thrillers. It kept my heart racing but I wouldn’t describe it as being a scary movie. That being said, 2017 offered up quite a diverse collection of horror films. Major box office hits, heart wrenching independent films, films with social commentary, and several sequels (some good, some not-so-good) all come to mind.

But one movie hit all the right spots for me — Andrés Muschietti’s IT. This movie encapsulated everything I love about horror. It brought me back to my childhood, watching Tommy Lee Wallace’s 1990 original with my cousins and covering our eyes during the scary parts, using my dad’s huge Stephen King novels to hold down blanket forts in my living room, and always seeing those two red letters on the cover of King’s 1986 classic and wondering what terrors lay within those pages. I loved the teaser trailers, the sneak peek at Pennywise’s new look, and to top it all off — the movie lived up to the hype. The child actors were stellar and Bill Skarsgård reminded me that I am, in fact, still terrified of clowns.

Melissa Caiazzo is the social media manager and assistant editor of Red River Horror.  During the day, she is a pre-school special education teacher.  A lifelong musician, Melissa plays flute, piccolo, guitar and piano.  Yes…she’s married to Eddie.  Pray for her.

For me, a horror film has to be scary.  That’s rule number one when determining my “favorites.”  It may seem obvious, but some people prefer a funnier tone to their horror films, but I do not.  While I am ALWAYS a fan of the slow-burn…it was the relentless terror of Annabelle: Creation that won me over.  This film was better than it had any right to be.  Unlike the original Annabelle, the 2017 prequel/sequel was suspenseful, creating a constant environment of fear.  Nobody in this film was safe, even during the daytime.  In a banner year for horror films, the newest creepy doll on the block wins the day in my book.

Eddie Caiazzo is the founder and editor of Red River Horror.  He is a television producer and radio producer/broadcaster during the day, voiceover artist by night and a DJ on the weekends.  He was born, raised and proudly resides in Philadelphia.  Yes…he’s married to Melissa.  Pray for her.