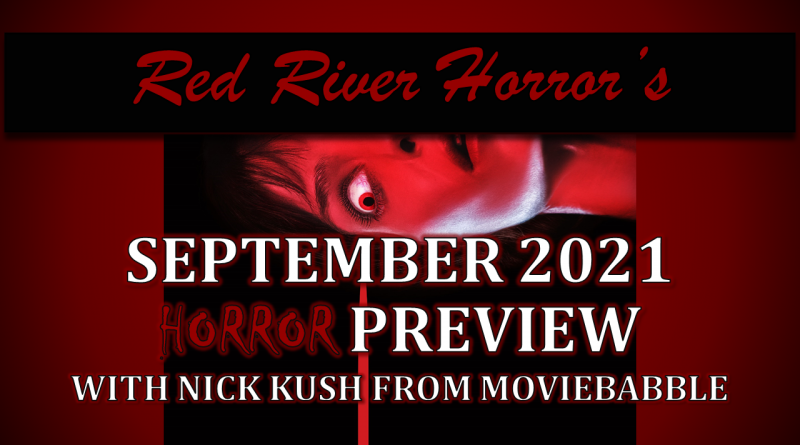 With fall right around the corner, it’s time we start to divert our attention to the spooky season. In fact, starting on September 1st, Shudder launched their lineup for 61 Days of Halloween, with weekly premieres of films and series (both old and new) on the service. So even though it isn’t even Labor Day weekend at the time of writing, you might want to start reaching for something that has a dash of pumpkin spice.

Let’s take a look at some of the horror and thriller movies coming out this month:

James Wan has been engrossed in franchise filmmaking for quite some time. Seriously, his last six directing jobs are parts of larger franchises: Insidious, The Conjuring, Insidious: Chapter 2, Furious 7, The Conjuring 2, and Aquaman. And with Aquaman and the Lost Kingdom currently filming, he’s showing no signs of stopping. But until then, he’s trying out what Warner Bros. is calling a “new vision of terror” in Malignant.

Madison (Annabelle Wallis) begins seeing visions of grisly murders as they happen and suspects the cause must be something that’s tied to her past. It’s Eyes of Laura Mars by way of demonic possession. Wan himself has said he was inspired by Bava, Argento, De Palma, and Cronenberg.

However, there have been whispers of borderline disastrous test screenings for the project. One should definitely be skeptical of such rumors — great movies frequently get curious responses at such screenings — but it’s definitely a data point to consider as you decide whether to venture out to theaters or stay at home to stream the film.

Malignant will be released in theaters and on HBO Max on September 10th.

Also releasing this week is the action thriller Kate starring Mary Elizabeth Winstead. The titular character is inexplicably poisoned, and only has 24 hours to exact her vengeance on her killer before she dies. To do so, she’ll have to battle against members of the Yakuza.

It’s certainly more thriller than horror, but Kate should have enough violence with its R rating for gorehounds to be satisfied.

Kate will be released on Netflix on September 10th.

I had the pleasure of watching Prisoners of the Ghostland at Sundance earlier this year…and I still have no idea what happens in this movie. Truly, Prisoners of the Ghostland is an insane experience, one that seemingly jumps from riffs on Mad Max and Escape from New York to an all-out samurai showdown in a matter of seconds. It’s a barrage of Eastern and Western influences — they collide in a way that isn’t always logically sound but is always entertaining. Believe the hype, this movie is wild.

Plus, Nic Cage’s line of reading of “testicle” might be my favorite thing ever.

Prisoners of the Ghostland will be released in theaters on September 17th.

The Guilty is the latest starring vehicle for Jake Gyllenhaal from director Antoine Fuqua, following a demoted police officer working in 911 dispatch who receives an emergency call from a kidnapped woman. But before this movie comes out, do yourself a favor and watch the original Danish version of the film from 2018 — it’s one of the best movies from that year.

Netflix has been coy with the marketing for The Guilty, only releasing the teaser below thus far. It’ll be interesting to see if it follows the same structure as the original, which takes place entirely in the emergency call center. Or, if Fuqua Hollywoods it up and makes it a more conventional structure.

The Guilty will be released in theaters on September 24th and on Netflix on October 1st.

We Need to Do Something – September 3rd (VOD)

The Madness Inside Me – September 3rd (VOD)

No One Gets Out Alive – September 29th (Netflix)