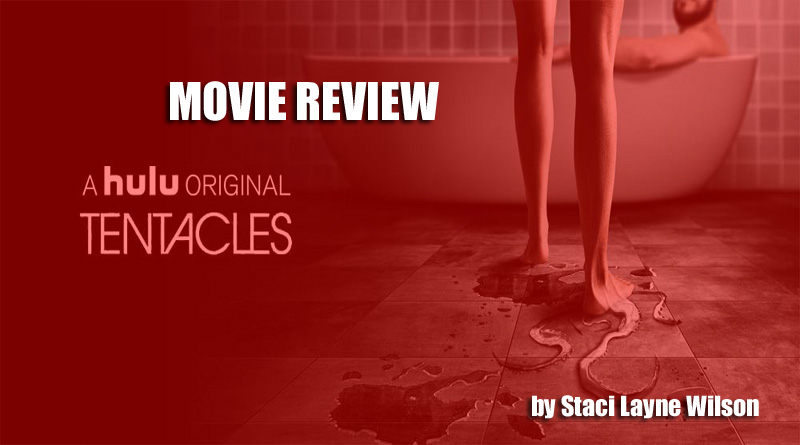 Hulu’s newest Into the Dark holiday-themed entry, Tentacles, offers up some Valentine’s Day body horror with a lot of sex and a little suspense thrown in. The poster art will lead you to believe there could be some Lovecraftian overtones, or maybe even a dark, twisted take on The Little Mermaid fairy tale—but it doesn’t come through on either count. Instead, Tentacles is more literal in its twist on the camouflaging talents of actual cephalopods.

While Tara (Dana Drori) is much better-looking than your average predatory mollusk, she’s down on her luck and needs to pounce on some prey, pronto. She soon finds her target in the form of Sam (Casey Deidrick), an alcoholic photographer who makes his living photographing homes that are for sale. (But what he really wants is to be a serious artiste.) The pair meet-cute at an open house, and before you can say “sold!” Tara is opening her legs for Sam. Wham-bam, things happen fast—but in the animal kingdom, and in Tara’s world, reproduction is crucial to survival. While Tara won’t be birthing any babies, she does need to further her species, and that goal is achieved through repeated physical connection.

Hapless Sam has no idea of all this, of course. He just thinks this girl is really, really into him. Before long, this intense intimacy infects Sam with a parasite of sorts which manifests itself in bleeding ears and bizarre dreams. Instead of running for his life, he asks Tara to marry him.

Tenacles starts off intriguingly enough. While the romance is more down and dirty than fun and flirty, there are some moments when the young couple simply enjoy each other’s company in the usual ways. They fix up an old house together, Tara encourages Sam’s artistic aspirations, and they have cozy chats like this one: “If you could live anywhere, where would you live?” Sam asks, and Tara answers, “Underwater.” (Not weird at all.)

There are a couple of red herrings thrown in, plus potential chum in the forms of Sam’s best friend and Tara’s stalker, but there isn’t much horror or dread when all is said and done. The conceit would have worked better if Sam had been more suspicious (think of how effective that mood was in 1978’s Invasion of the Body Snatchers). Another thing that had me checking out a little over halfway through was how dumb the characters are (terrified, rattled people answer unexpected knocks on their door without looking to see who’s there—this happens two or three times during Tentacles).

All is not lost, though. Tentacles does offer a few tense moments, especially in the squirm-inducing transformation from one life-form to another. It’s almost as gooey and gory as one might hope (but not up to 1986’s The Fly levels or anything) and yes, there are tentacles. The feelers are appropriately sinister-looking in their grasping undulations, bringing to mind—just a teeny bit—1981’s Possession.

In the end, there’s just enough to earn Tentacles a watered-down recommendation.