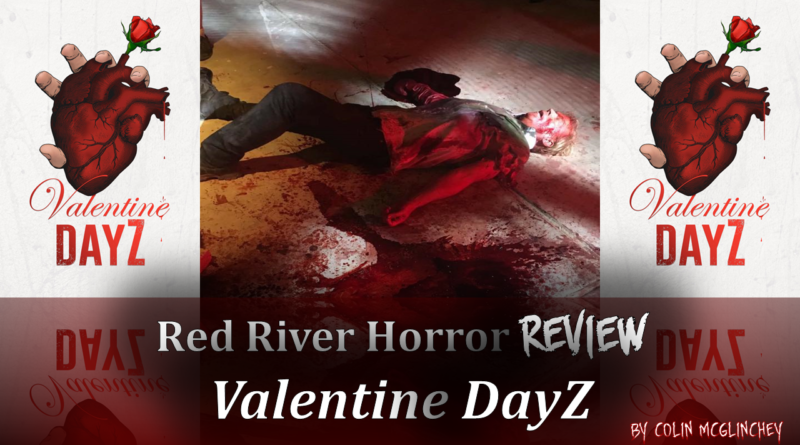 Love is in the air in the new horror-comedy Valentine DayZ…but it’s not the only thing. Right alongside Cupid’s arrow is something else, something that’s turning people into the (clears throat) walking dead. Standing in the way of the apocalypse is a mild-mannered, older guy named Max (Dallas Valdez). At first glance, Max doesn’t exactly give off humanity’s savior vibes. As our luck would have it, Max isn’t actually all that mild-mannered after all.

When we first meet Max, he, in turn, has just met the girl of his dreams, Sarah (Carrie Keagan). Sarah and Max’s whirlwind romance is more or less the main attraction of Valentine DayZ. It’s hard to really commit to that statement, however, because the movie doesn’t really follow what you’d call a normal narrative structure. Tangents to nowhere abound. New characters show up, are promptly dispatched, and we move on. Are these digressions a way to show the scale of the zombie epidemic? A chance to scare up some laughs via a few oddball non sequiturs? Or a desperate bid to pad out a thin story? More times than not, it feels like the latter, particularly during an exceptionally long birthday party for a toy doll.

As a hero, Max seems to be cut from the Bruce Campbell cloth – although that is a big chin to fill and Valdez is not quite up to the challenge. He dishes out punny one liners to varying degrees of success and even (briefly) sacrifices a hand to his cause. Working opposite Valdez is Keagan who, begins her character life as little more than a generic love interest. She’s given more to do later on and it’s a welcomed change. Still, the pair never really develop much chemistry which makes it tough to really get invested in the twists that befall them, and the story as a whole.

In general, the humor throughout Valentine DayZ is spotty. Some jokes hit. Sadly, many others do not. One area where Valentine DayZ does succeed is with its higher concept take on zombies. Unlike the traditional living dead, these creatures start out as ravenous rage monsters only to evolve more complex behaviors the longer they remain undead. It isn’t unheard of to give zombies their own afterlife-lifecycle. The Girl With All the Gifts used the gimmick to great success not all that long ago. By following along that line and thinking bigger than shambling corpses, the filmmakers here are able to somewhat liven up the otherwise done-to-death zom-com subgenre.

Valentine DayZ is an almost grueling exercise in camp. It’s the kind of movie where a character can earnestly say “Hammer time” before attacking someone with a hammer. If that – and watching an adult woman sing “Happy Birthday” to a doll for just way too long – sounds appealing to your funny bone, then have at it. Otherwise, this one is best left on the shelf next to that dusty box of conversation hearts.