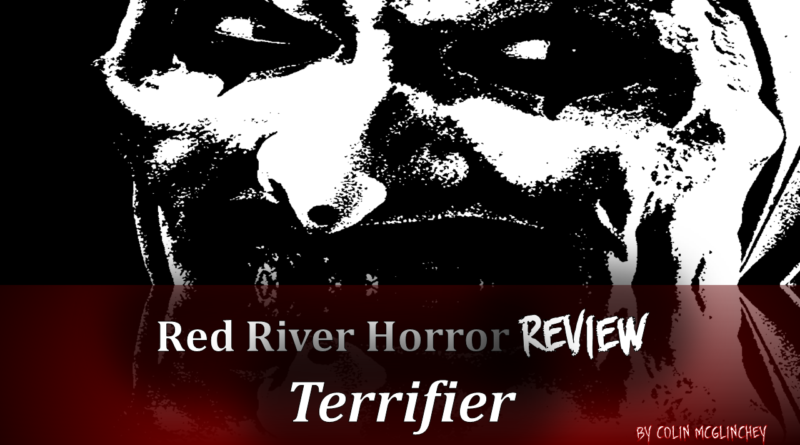 Set primarily during the dying hours of Halloween night, Terrifier is an exasperatingly gore-heavy and story-starved slasher from writer/director Damien Leone. The film documents — in unflinching detail — the carnage left behind by a killer clown named Art. Early on, an unlucky bit of happenstance lands a pair of drunk girls (Tara played by Jenna Kanell and Dawn played by Catherine Corcoran) in Art’s crosshairs. Unfortunately for the girls, he has a trash bag full of vicious implements waiting for them – and anyone else who gets in his way.

Terrifier fancies itself a throwback to 80s slashers. Leone clearly has a reverence for that era, leaning on the deviant cheesiness that pervaded many of those films. Yet, Terrifier is as much a product of the torture porn scene as anything else. Art and his creator (who, unsurprisingly, has a makeup effects background) relish the cruelty they inflict on victims. Art doesn’t just leap out from around a corner and stab someone. No, he takes them apart and we, the viewers, are dragged along. What makes Leone’s insistence to show us every hammer blow and hacksaw slice close up so infuriating is he has other tools at his disposal. The stalk sequences in Terrifier are tense enough to do a number on the fingernails of even the most jaded horror fan. It’s unfortunate Leone so frequently drowns that tension in leering, eye-rolling amounts of blood and viscera.

Connecting those nail-biting stalk scenes and stomach churning gore effects is … well, nothing. Leone has no clue how to get Art from splatter-y set piece to splatter-y set piece. See, Art originated as a multi-purpose boogeyman who mangled his way through a series of shorts and anthology segments also from Leone. Despite his undeniably powerful presence in this, his full length feature debut, Art never expands his story beyond the short subject world. Instead, Terrifier lurches from murder-to-murder on the back of tired clichés and head-scratching non sequiturs. Leone’s characters are the kind that stop and investigate every strange noise and who love turning their back on danger. They’re also, on occasion, locked in dead serious mother-child relationships with china dolls. You know, because.

Terrifier has all the makings of a modern slasher classic. Leone has a killer eye for unnerving visuals and a ruthless understanding of the art of creating tension. He has a cast that is more than capable and game for what he asks. Lastly, he has a villain custom-built to be the cause of many a sleepless night. What he doesn’t have is anything to say. So, he abandons his characters to float along without purpose or direction until their time and lives arbitrarily expire. Instead of birthing a movie maniac for modern audiences, Terrifier merely takes the knees out from under its fledgling slasher.