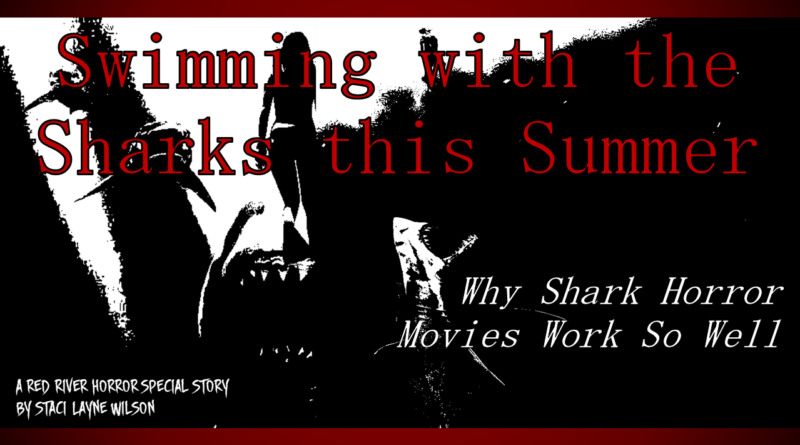 While Steven Spielberg’s Jaws has certainly set the gold standard for underwater-attack movies, there have been a few good ones since. Renny Harlin’s Deep Blue Sea is big, dumb fun and features a killer speech by Samuel L. Jackson just before he’s killed. Open Water, an ultra low-budget yet realistic and well-made thriller, made a splash several years ago. The Shallows, starring Blake Lively as a lone girl against a murderous Great White, came out in 2016 to mixed reviews but big box office. 47 Meters Down, a sea-set thriller with Mandy Moore trapped in an immersed cage and being circled by sharks, debuted on Netflix recently. Then there’s the cheesy TV-chum, Sharknado and its sequels, which have become a SyFy Channel staple over the past several Shark Weeks.

Even though there’s no shortage of sharks in horror movies, it’s still a niche genre. Maybe that’s because sharks aren’t really a threat to the average person—unlike say, a serial killer, who can be anywhere at any time.

We caught up with Darin Scott (Tales From the Hood 1 and 2), the director of the newest toothy thriller Deep Blue Sea 2, to ask him about why he thinks sharks are so scary to so many landlocked movie-lovers.

“It’s the same thing as plane crashes,” Scott said. “Plane crashes are statistically very rare, but we are still terrified of them.” As for shark assaults, you actually have to go into the ocean in order to be in danger. If you’re in the Midwest, your chances of being bitten by a shark are nil. But as Scott explains, “It’s not the where-ness of something happening. It’s the fact that it does actually happen and that is its horror. The fact is, even though sharks kill very few compared to the number of people who get in the water, there are shark-related deaths every year. And I think since Jaws, which released this idea in people’s minds—‘oh yeah, there’s sharks out there’—now we’re focused on it. And every time a shark attack happens, it’s a worldwide headline story. It certainly captures the imagination. I know when I’m at the beach in the water, I don’t like to go out past chest-high. That’s as far as I go before I start hearing that famous theme in the back of my head.”

Sharks are also terrifying because they really are prehistoric. We don’t fully understand them because they are from another time. And they bring to mind monsters. Shark movies are, in fact, monster movies. “We’ve always had monster movies, and certainly from the fifties on, those stories are usually about creatures that were created by man being irresponsible with scientific experiments.”

In Deep Blue Sea 2, Scott’s sharks are genetically modified with the goal of weaponizing them. “Whether it’s atomic testing that led to giant spiders and other huge creatures that people have fought against in the movies for years and all the way up to something as fun and silly as [the movie] Frogs, where nature suddenly became aware and it’s never really explained why. Man being irresponsible with the environment leads to disaster because it creates an intelligence and awareness on the part of animals. And in this particular series, Deep Blue Sea, the change is done on purpose. Man experimenting with the brains of an alpha predator to make him intelligent and discovering, once again, that that’s probably not a good idea. The only advantage we had over the alpha predators was that we were smarter than them, so if you take that advantage away, you’re in trouble.”

While Deep Blue Sea 2 is set to hit the small screen via the SyFy Channel this summer on August 8 [but it is out now on VOD, iTunes, Amazon, at the stores and on Blu-ray], shark-fans will also get to submerge themselves into the world of The Meg (short for Megalodon) just days later on the big screen when it comes out on August 10, 2018.

You will really be able to dive in, thanks to 4DX—a so-called “new” technology which would make William Castle proud. 4DX is the ultimate in state-of-the-art equipment, delivering a fully immersive cinematic experience. The chairs in the theater shake and bounce and you will be literally slapped with environmental effects including a sea-breeze and wet waves as the onscreen shark emerges from the ocean’s depths. Judging from the tongue-in-cheek trailer and the casting of Jason Statham, The Meg is not going to be taking itself too seriously. Think: Piranha rather than Jaws. But still—it’s bound to have lots of thrills.

While scary sharks are all well and good, it’s the human beings that really make these movies memorable. Would Jaws have been as effective without Roy Scheider, Richard Dreyfus and Robert Shaw? Scott knew this factor was of the utmost importance when he cast Michael Beach as the villainous “mad scientist” in Deep Blue Sea 2. “What makes Michael a good villain besides being a really good actor, is he has something that all great villains have,” Scott explained, “which is a motivation you can understand and even agree with. But you don’t like their methods. If you go through memorable villains in history, over and over again, as they talk about why they do what they do, and you find yourself nodding and going, ‘Yeah, yeah that makes sense. OK, I understand. I see why you want to do that. That’s good.’ And then they kill everybody to get it done. Now they’ve gone too far!”

Not many horror films use flesh-and-blood animals, and certainly not real sharks onscreen (with the exception of Open Water, which was filmed in the Bahamas with live predators) because really, they don’t need to. By now, most folks know that Jaws was portrayed by a cranky animatronic contraption nicknamed Bruce by Spielberg and crew. (In fact, there’s a great 2007 documentary called The Shark is Still Working, directed by Erik Hollander, which you should check out if you haven’t seen it.)

Deep Blue Sea 2 features a scene or two with an animatronic. “We did have one Bruce-like shark. Unfortunately, he was quite Bruce-like!” Scott laughed. “He did not work that well. But there are shots of him in the movie. We only had 24 days to shoot, which for a movie that takes place all in water, was really fast. So our ‘Bruce’ was in a few shots, and we have a few scenes which are real fins going through the water, but the rest was CG.” Which it would have to be, as the mini-monsters and brawny brainy ones in Scott’s creation don’t actually exist. This is a whole new breed… and much, much scarier than Sharktopus!

Whether you see sharks are pitiless psychopaths crunching every human in sight or as misunderstood creatures who’ve gotten a bad break, there’s no doubt you should see both of these thrillers this year. Each brings a different type of tale to the surface: Deep Blue Sea 2 has genetically modified sharks, while The Meg surfaces with a canny creature that’s been hiding below the Mariana Trench for countless eons. It’s a win/win for we shark-movie fans!