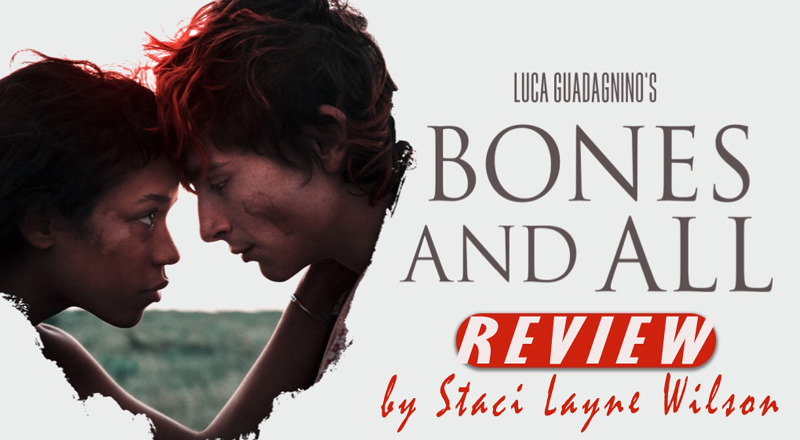 Set in the 1980s in rural America, Bones and All follows the tender love story of Maren (Taylor Russell) and Lee (Timothée Chalamet)… and the tender meat they both must have. The romantic teens are cannibals; a subspecies known as “Eaters.”

Eaters look just like anyone else and they live among the normies, usually without incident. But as Maren grows into adulthood, she finds it increasingly harder to control her flesh-feasting impulses. After biting a high school classmate’s finger clean off, it’s dine-and-dash time. When Maren runs home to her dad, Frank (André Holland), in a panic, it becomes clear that she’s done stuff like this before and that they’ve had to move around a lot, staying one step ahead of trouble. They gather their things and get out of the proverbial Dodge—but the next morning, Maren wakes up to find that her father has skipped out, leaving nothing but a cassette recording as an explanation. As the story progresses, we hear more and more of the tape.

Maren gets on a bus, buying a ticket to basically anywhere. She lands in a derelict little town and is soon sniffed out by another Eater, Sully (Mark Ryland). Sully is a creepy old man but he’s got the answers to Maren’s questions as he is the first and only of her kind that she has ever met. But from then on, Eaters are practically falling out of the trees, and before long, she connects with enigmatic Lee, an attractive, mysterious loner who takes her under his tutelage. Little do the lovebirds know, Sully is trailing them…

Bones and All is directed by Luca Guadagnino who, for me, is hit-or-miss. While beautifully wrought, his Suspiria remake left me a bit cold; but I loved A Bigger Splash (which is his biggest flop so, what do I know?). Bones and All is based on a YA novel of the same name and it was adapted for the screen by David Kajganich (who did a good adaptation of the bestselling true-crime thriller, True Story—and penned the aforementioned Suspiria and A Bigger Splash).

As a killers-coming-of-age road trip movie, Bones and All is fine; it’s Badlands with bites instead of bullets. As a horror film, it leaves a lot to be desired. Sully is a vile villain and Rylance is top-notch in the role but we don’t see enough of him to build suspense. As for the cannibalism, there are some rather gruesome scenes but the steaks, er, stakes don’t seem all that high since the Eaters do not need human flesh to survive and what’s more, they can control themselves long enough to carry out premeditated acts of murder. There is the dangling carrot of Maren’s search for her mom (Chloë Sevigny) and while the payoff is good, it’s too little too late. Same with most of the cameos—they’re fun for horror fans (1977 Suspiria star Jessica Harper; Michael Stuhlbarg from Shirley; and David Gordon Green, director of the latest Halloween movies) but don’t serve much purpose when all is said and done.

Bones and All is similar in tone and presentation to elevated, arty, metaphoric movies like Trouble Every Day, Let the Right One In, Only Lovers Left Alive, and The Neon Demon. So, you won’t be getting a thrill-a-minute or any chills of dread, and little in the way of gore (but when it gets bloody… it does). What you will get is excellent acting, luscious visuals, and a whole lot of filler—there are so many lingering shots of sweeping fields, endless open roads, angsty characters lost in deep contemplation, and so on. Whether you’ll enjoy Bones and All will likely depend on your tolerance level for its self-indulgent, stylish presentation and, probably, your mood. I can’t say it’s bad—but it’s an acquired taste.