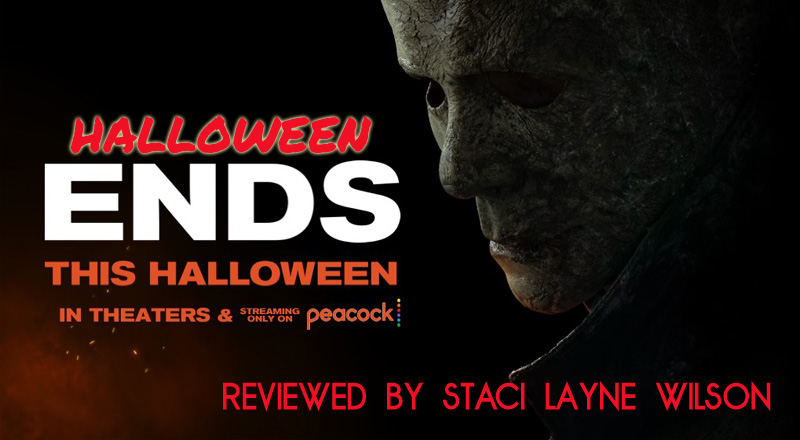 When director David Gordon Green came out with his bold Halloween sequel in 2018 by ignoring all the mythology that was built after 1978, it was a surprising stab in the right direction. It had everything that made horror fans fall in love with the franchise—the October 31 setting; the relentless, silent, stealthy killer; Laurie pit against Michael; the iconic John Carpenter music; crisp, dark cinematography; and gore galore. Halloween Kills came out in 2021 with the same filmmakers and cast, and while there were entertaining moments—and some humor, both purposely and unintended—it was a slash down. Now we’re scraping the bottom of the casket with the worst of the trilogy by far, Halloween Ends.

Halloween Ends begins somewhat promisingly, with a babysitter scenario, set in 2019. Corey Cunningham (Rohan Campbell) is an awkward, nebbish, glasses-wearing college student who mows lawns for pocket change and does a little childcare on the side. While watching a particularly bratty brat, things go horribly wrong and the boy dies while in Corey’s care, branding him an outcast and a target for bullies.

For some unfathomable reason, Laurie (Jamie Lee Curtis) thinks the clearly unhinged Corey is quite the catch for her granddaughter, Allyson (Andi Matichak). Allyson is dealing with some trauma too, having lost all her friends to Michael Myers (James Jude Courtney) in Halloween, and her mom in Halloween Kills. Now she and her gun-toting Granny are living together in a big, easy-to-break-into house in Haddonfield and trying to cope. Laurie does so by writing her memoir, and Allyson helps others by working as a nurse at the local clinic.

There are other familiar faces here to bid adieu to Haddonfield’s finest fiend—Will Patton as Officer Hawkins, a cameo from Nick Castle (the original Shape), and Kyle Richards as Lindsay Wallace (she was the child Laurie Strode was babysitting the night Michael came home in 1978).

There have been some major missteps and deviations throughout Halloween’s long and storied history—Halloween III: Season of the Witch (1982) was about a pagan cult and didn’t even have Michael in it all; 2002’s Halloween Resurrection had rapper Busta Rhymes busting out kung-fu against The Shape; and Rob Zombie’s Halloween II (2009) had an arthouse dream horse trotting around the neighborhood for no apparent reason. But Halloween Ends is among the worst. There is just something about it that feels very un-Halloween-like. The movie is mostly about Corey and his descent into madness after being bullied to the point of murderous rage. When Michael does show up, he’s… weak. The kills are few and far between and the showdown between him and Laurie feels anticlimactic.

While most of the characters are basically caricatures that elicit zero feelings about them one way or another, the cast is top-notch. Even given some rather regrettable dialogue and eye-rolling motivation, they do their best. Fortunately, the top three—Curtis, Matichak, and Campbell—have the chops to save Halloween Ends from being a complete disaster.

If you’re a Halloween fan like me, you’ll probably watch Halloween Ends regardless of the reviews. It may not be what you want or expect to see, but when all is stabbed and slabbed, there is, at least, a fitting and final farewell.