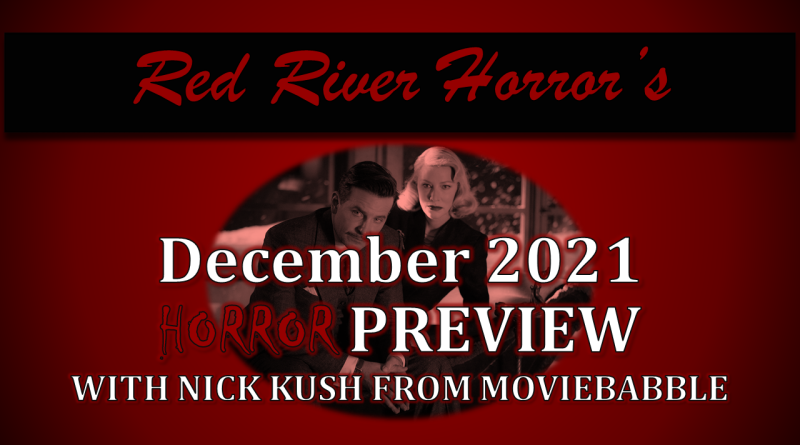 Naturally, December is the time of year for all things cheery. The romanticism of the holiday season, family gatherings, and newfound hope that “next year will be my year!” That’s all well and good, and yet, isn’t it fun to be a bit of a holiday contrarian too? While many tend to gravitate toward cutesy Hallmark and Netflix movies, unsurprisingly (I write for this website, after all), I enjoy a bit more splatter and cynicism in my holiday content.

Let’s dive into some of the films that can scratch that itch in the December 2021 horror preview:

A paraplegic named Eva (Eugénie Derouand) receives a mysterious advent calendar as a gift from a friend, with each day having instructions in their corresponding chocolate wrappers. Once Eva starts, she can’t stop until the final day. The back of the calendar even states, “dump me, and I’ll kill you.” The requests actually seem sincere at first — one helps her reconnect with her ailing father — but they quickly become more nefarious from there as if par for the course in this kind of film.

I’ve long admired Shudder’s ability to find off-the-beaten-path horror movies for its service, and The Advent Calendar looks primed to be another sneaky success.

The Advent Calendar will be available on Shudder on December 2nd.

Speaking of cynicism, Silent Night details an upper-class family coming together for a holiday dinner…on the eve of an environmental apocalypse. While the world comes to an end, this family (consisting of Keira Knightly, Matthew Goode, Annabelle Wallis, Lily Rose-Depp, and more) plans to do it up one more time before taking their government-issued “exit pills”. With Adam McKay’s Don’t Look Up right around the corner as well, the apocalyptic tragicomedy subgenre seems to be having a bit of a moment.

Silent Night will be available in theaters and on AMC+ on December 3rd.

I’m always fascinated with what artists choose to as their follow-up project to their breakout Oscar successes. Oftentimes they chase a massive check: think Rami Malek signing on to be the Bond villain whose name is essentially “Lucifer Satan” shortly after winning Best Actor for his role as Freddie Mercury. Other times, winning an Oscar allows a creative to finally earn enough adulation in the industry to get funding for a long-held passion project. It’s the latter for Guillermo del Toro after The Shape of Water, who’s had interest in creating his own version of Nightmare Alley for some time.

Although Nightmare Alley is a remake of the 1947 film of the same name, del Toro has noted that he was introduced to William Lindsay Gresham’s 1946 novel before ever seeing the original film. And that his version will be a hard R rating. It will be fascinating to see del Toro’s take on the material. When also considering the cast involved — Bradley Cooper, Cate Blanchett, Toni Collette, Willem Dafoe, Richard Jenkins, Rooney Mara, and more — Nightmare Alley seems like a must-see this month.

Nightmare Alley will be available in theaters on December 17th.