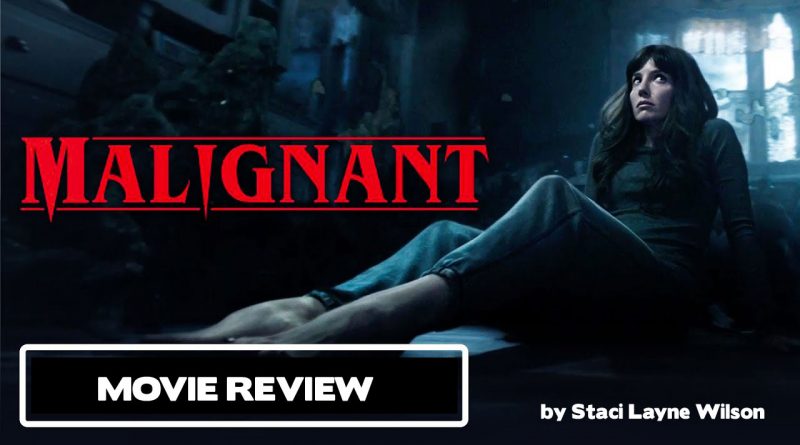 James Wan’s Malignant opens in the form of a flashback set in a mental asylum where Dr. Florence Weaver (Jacqueline McKenzie) is video recording notes on her latest, most baffling and disturbing case. There’s a commotion in another room and she dashes off to investigate—and is soon caught up in a shockingly gory melee—bordering on Monty Python comedy—that ends with her holding a tranquilizer gun and saying, with utter conviction, “It’s time to cut out the cancer.” Then the opening titles begin. Now we are in present-day Seattle as pregnant Madison (Annabelle Wallis) returns home from a long day at work to her moldy mansion and her do-nothing husband, Derek (Jake Abel). She’s exhausted and all she wants to do is relax, but her day ends in blood… and so it begins.

Malignant, which screenwriter Akela Cooper adapted from a story by Wan his wife Ingrid Bisu (who is also in the film as a surgical assistant), is a strange yet compelling collage of tonal changes and shifting storylines coupled with camp and dead seriousness. Here Wan plays in the sandboxes of some of his favorite directors and certain movies of theirs—Brian De Palma (Sisters), Dario Argento (Trauma), Frank Henenlotter (Basket Case), Hideo Nakata (The Ring), David Cronenberg (The Brood), and John Carpenter (the Halloween movies)—and he seems to be having a lot of fun. But will you? That’s tough to say, as Malignant is a lot to take in and may in fact fare better with multiple viewings. One must give the director credit for not retreading his tried-and-true (and very lucrative) ground—Malignant is nothing like the Saw, Conjuring, or Insidious franchises.

As the story unfolds with more flashbacks, we learn that Madison has a dark, complicated past; she was adopted as an adolescent, and found herself, for the first time, with loving parents and a caring sibling. Young Madison (Mckenna Grace) has a spotty memory, a sinister imaginary friend, and a fascination with knives, but eventually she settles into family life. In the present day, her adoptive sister, Sydney (Maddie Hasson) provides emotional support to Madison as she struggles to come to terms with a string of miscarriages and the sudden death of her husband. Add in detectives Shaw (George Young) and Moss (Michole Briana White), who are working on solving the murder of Dr. Weaver, and a mysterious, monstrous, trenchcoated man known as Gabriel (Ray Chase) who haunts Seattle’s underground city, and you’ve got a convoluted, giallo-esque plot!

Wan does a great job of nailing an intended “unintended comedy” tone, coupled with intense, exploitation-era gore. But unlike some of the cheapie flicks he’s winking to, the director sticks to an upscale style. Composer Joseph Bishara’s score is slick and accomplished, while DP Michael Burgess excels at lush, color lighting and pulse-pounding tracking shots. The look and feel of Malignant is bolstered by CGI—some of it dodgy, and probably on-purpose to give the film a practical-effects ’80s texture.

While the characters are cliché (again—as calculated), the actors don’t play them that way. Each is committed to conveying the truth in those shallow stereotypes, making them seem like real people who have been thrown into absurd or/and dangerous situations. For example, when Sydney goes to the old, abandoned hospital where the opening scene massacre took place looking for clues, she sees that the records department is in the basement… “Of course,” she cracks. But she doesn’t say it like the character in a broadly comedic Scary Movie flick, she says it as you or I would. The heart of the story is heroine Madison, and Wallis plays her levelly when it would have been all too easy (and perhaps even more fun) to go over the top.

Malignant is not a perfect film—the tonal shifts are sometimes jarring—but does such a thing exist? Perfection is in the eye and mind of the beholder, after all. It’s best to go into this one without expectations. It’s also helpful if you’re familiar with the horror and sci-fi films Wan riffs on here. Go in expecting to have a rip-roaring good time, and you most assuredly will.