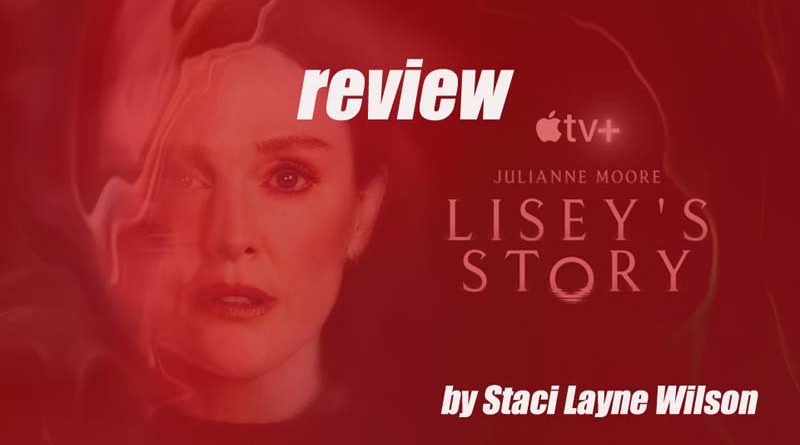 Lisey’s Story is based on a convoluted, mysterious Stephen King novel of the same name, but there’s a twist: unlike most adaptations, the master of horror himself wrote all eight episodes of this limited series.

There are actually two stories unfolding throughout the series—Lisey’s in the present and the emotional autopsy of her dead husband’s celebrated but difficult life. Scott’s past was marred by a strung-out, abusive dad (Michael Pitt), so as a boy, he developed the ability to hide inside a magical realm known as Boo’ya Moon. Lisey’s catatonic sister Amanda (Joan Allen) has also gone to this mind-world, while Lisey’s other sister Darla (Jennifer Jason Leigh) struggles to keep the remnants of the family from dissolving entirely. Scott’s absence leaves Lisey struggling to find her own identity… and follow the clues he left in the form of a treasure hunt.

If that all seems about as clear as mud, you’re not wrong. I read the novel, but even that didn’t help me navigate this slow, overly-opaque jumble of horror. I use the term “horror” loosely. Casual fans of King will be greatly disappointed by the lack of genre in Lisey’s Story. Others will be scratching their heads at the odd phrasing and made-up words sprinkled throughout the dialogue. (This grating “inside” language between wife and husband was even more egregious in the book—one reviewer pointed out that King used the word “smucking” 50 times over a 100-page span.) Aside from trying to figure out what the hell a “bool” is, we’re also contending with inscrutable dialogue like, “Secret secrets are no fun. Secret secrets hurt someone,” “No more of your bitchery,” and long-winded expository conversations over dreary dinners.

Director Pablo Larraín (Jackie) and the fabulous cast do well but buckle under the strain of such a heavy, unwieldy, overlong yarn. While I did find Lisey’s Story a slog, there were a few things I liked. The actors are excellent, especially DeHaan and Pitt, who pop as unhinged baddies. Moore is excellent as well, redeeming herself from her uncharacteristically poor performance in this year’s Netflix downer, The Woman in the Window. The elaborate, beautifully appointed sets and grand locations don’t hurt, and the music score is appropriately eerie. Best of all is Darius Khondji’s masterful cinematography, a true delight to the eyes and the soul—the DP (whose credits include Se7en, The Ninth Gate, and Too Old to Die Young) really knows how to paint with moving pictures.

I wanted to love Lisey’s Story. On top of being a longtime fan of King, I had high hopes for Larraín’s interpretation of the story and, of course, the top-notch cast. Sadly, it’s a mess—and not even a hot one—on almost every level. There’s way too much to unpack here, including flashbacks, nightmares within dreams, and a posthumous treasure hunt, that, like this series itself, leads to nowhere.

While Lisey’s Story may be personal for both King and his wife, Tabitha (it is a “what-if” originally written after he was hit and nearly killed by a van in 1999), this series is just not relatable to a broad audience.