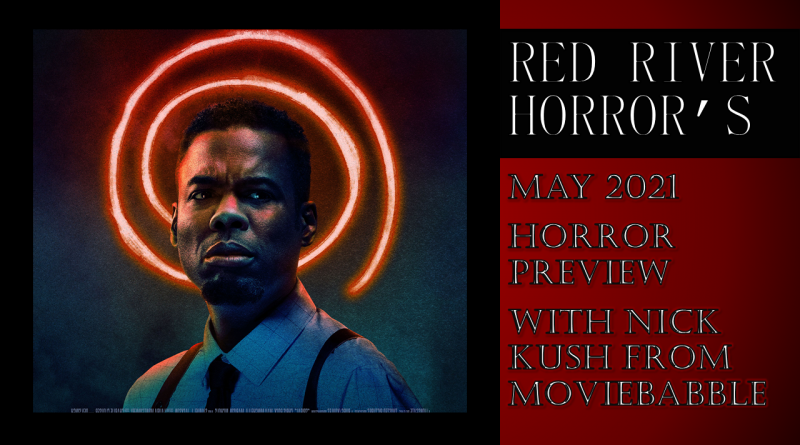 My favorite part of writing these monthly horror previews is finding possible hidden gems. Movies that aren’t necessarily getting the headlines, but might prove to be big-time hits for horror fans scouring the film landscape looking for something innovative.

With a heavy heart, I must say that this will not be the focus of this month’s edition. (But while I have your attention, do investigate Fried Barry on your own time.) Instead, May belongs to the horror blockbuster and/or franchise.

Let’s take a look at all the horror movies releasing this month:

The Saw franchise seemed dead after the lukewarm at best response to the sequel-reboot-reimagining Jigsaw back in 2017. But then Chris Rock came into the picture and pitched a new direction for the franchise to Lionsgate. And after a year of COVID-related delays, we now have Spiral. While he’s stayed busy in recent years, Rock’s last film project of note is realistically 2014’s Top Five. He has the luxury of not needing to work often after such a successful career, so seeing him have a seemingly genuine excitement for this project has me very excited to see where Spiral takes us.

Spiral: From the Book of Saw will be available in theaters on May 14th.

Also opening on the 14th is the long-delayed thriller The Woman in the Window starring Amy Adams as an agoraphobic psychologist (which seems fairly contradictory, but I guess we have to roll with it) who suspects foul play when a neighbor across the street disappears. The film was initially set to premiere back in late 2019, but was then pushed back for re-editing after poor test screenings. Then, COVID-19 came for the film as well, putting it in limbo with 20th Century Studios and Disney. But as they have on so many other occasions, Netflix swooped in and purchased the film.

Could the final result be worth the wait? It’s hard to say. Joe Wright is a very accomplished director, and the cast consisting of Julianne Moore, Gary Oldman, Anthony Mackie, Wyatt Russell, and Brian Tyree Henry in supporting roles is impeccable. Still, it might be headed toward becoming a star-studded disappointment given its rollercoaster journey.

The Woman in the Window will be available on Netflix on May 14th.

I can’t say I’m a fan of most of Zack Snyder’s work, but there’s no questioning Army of the Dead will benefit from the wave of support Snyder received during the entire Snyder Cut ordeal. He’s reached an entirely different level of fandom. But even for the most hardened cynics like myself, there are some things to be excited about here. Specifically, Dave Bautista shooting intelligent zombies in the face as he and his ragtag crew attempt to break into a Las Vegas vault and get away unscathed with over $200 million. Also, there’s a zombie tiger.

If you ask me, Snyder should have been riffing on (or ripping off, some might say) George A. Romero’s filmography this entire time rather than getting caught up in the superhero movie machine.

Army of the Dead will be available on Netflix on May 21st.

Many have been clamoring for A Quiet Place: Part II for some time now. Originally set for a late-March 2020 release, the sequel is positioned as the start of a franchise. (Or, at the very least, the expansion of the world seen in the first film.) While I’m not the biggest fan of A Quiet Place, I’m genuinely curious to see which directions the sequel takes. This is one of the few organic creations of a franchise in the modern movie landscape. A property created from an original script, not a comic book or best-selling novel. I’d like to live in a world where more movies from similar backgrounds get a chance.

A Quiet Place: Part II will be available in theaters on May 28th.

The Strange House – May 14th (Netflix)