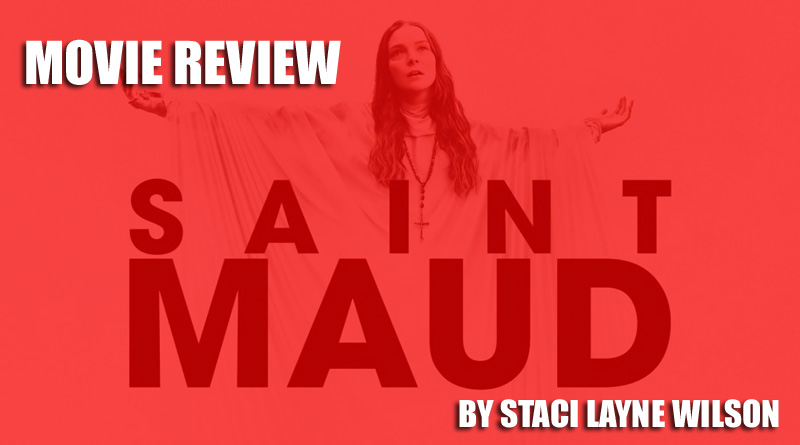 Douse a splash of holy water on a horror film and you’ve almost always got a surefire winner. Think of the classics—Rosemary’s Baby, The Exorcist, and The Omen to name only a few. Whether the viewer is religious or not, genre films that immerse in those grand themes seem to stick with us the longest. There’s something about the idea of an all-seeing, all-knowing, all-powerful unseen deity being obsessed with our doings that’s just plain scary. Add to that the trappings—particularly Catholicism with its crucified Christ, dominant red color scheme, dagger-like crosses, avenging angels and dangerous demons—and there’s bound to be both psychological and visual flair in the film. Saint Maud, the newest offering from A-24, is no exception.

Maud (Morfydd Clark) is a shy, reclusive, obsessive young caregiver who, following a mysterious trauma, pursues a pious path of strict Roman Catholicism. As part of her penance and do-good ideals, she gets a job caring for hopelessly ailing, terminally ill patients. When we meet Maud, she’s just taken on the task of hospice care for Amanda (Jennifer Ehle), a retired dancer being consumed by cancer. Maud’s fervent faith inspires an obsessive conviction that she must save her ward’s soul from eternal damnation—and she will go to any lengths to make sure Amanda is saved.

The contrast between the women’s individual approaches to this life and death situation immediately sets them in opposition. Maud is severe, reverent, and grave when dealing with her charge’s imminent demise. Amanda, on the other hand, sees the end of the road as one last party—she’s going to drink, smoke and sex it up while she still can. In spite of their diametrically opposing viewpoints, a shaky friendship forms between the women, and a bond of sorts is forged. But Maud is hard to like. Because of her obviously troubled past, which is presumably the reason behind her sudden, all-in pact with God, she’s brittle and harsh.

Maud not only rebukes those around her but also takes pains to make sure she, too, is punished. While in the throes of painful self-flagellation, Maud experiences rapturous visions of the world beyond ours… or are they visions at all? And who is behind them? Maybe it isn’t the heavenly father at all. As Maud’s grip on reality begins to loosen, so too do her morals—Amanda could well be in the care of a killer.

Religious fervor as an allegory for one’s descent into madness is nothing new, and nor is the “elevated horror” genre—but writer/director Rose Glass pulls everything off with such panache that Saint Maud feels fresh, and it sure is chilling. The characters are somewhat clichéd, but the performances elevate them—Clark carries the film squarely on her shoulders—and one ultimately feels invested in the characters and story. While the subject matter is somber, Glass tempers the mood with the occasional flash of gallows humor, which works well. Saint Maud is all psychological horror with little gore, but there is one well-placed, spring-loaded “jump scare” moment that will surely haunt some viewers.

An unsettling score and darkly artistic cinematography set the eerie tone. Saint Maud is another stylistic winner from A24 (The Witch, The Neon Demon, Midsommar). It’s just the right length to pack a punch, offers some truly unsettling scenarios as it races to a fitting climax.