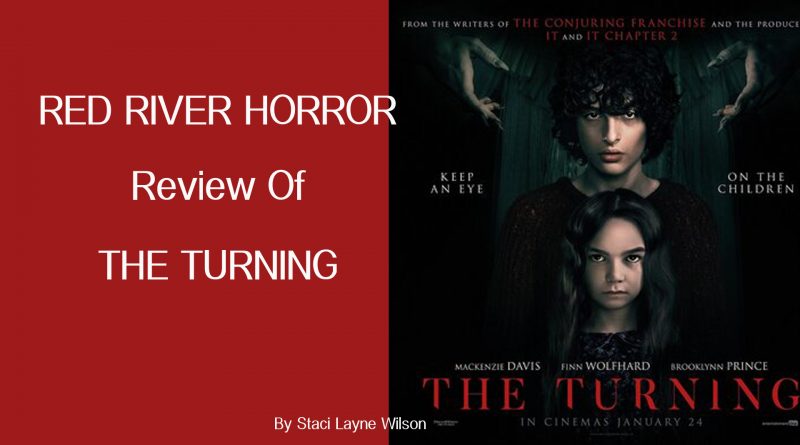 “I seemed to float not into clearness, but into a darker obscure, and within a minute there had come to me out of my very pity the appalling alarm of his perhaps being innocent. It was for the instant confounding and bottomless, for if he were innocent, what then on earth was I?”― Henry James, The Turn of the Screw

If you’ve been looking a good, old-fashioned gothic horror fable to sink your teeth into ever since Netflix’s “The Haunting of Hill House” took a break, then The Turning is sure to turn your crank.

Up to now, The Innocents (1961) was the best, most definitive cinematic version of the immortal gothic ghost story quoted above. Set in silvery black and white, the feature stars a nervous Deborah Kerr as an impressionable, inexperienced nanny beleaguered by the two not-so-innocent children she’s been hired to care for. It’s a splendid film and in some ways, still shocking. While there is nothing shocking about The Turning, it’s still a terrific take on the tried-and-true tale (of which there are 40 big and small screen adaptations!).

The studio was smart to hire more than just a director for this—Floria Sigismondi is a singular visual artist who expresses herself beautifully in a myriad of ways including still photography, painting, and stylish music videos. She’s made only one other feature, The Runaways, which is the true story of an all-girl rock band that sprung from the Hollywood scene in the 1970s. The Turning is also retro (1990s) and has a rock n roll flavor thanks to some Kurt Cobain imagery and a Goth teen who plays loud, grungy tunes in his basement bedroom.

The song remains mostly the same with the setup of a young governess who’s hired to supervise an orphaned girl and boy out on an eerie, isolated estate. Kate (Mackenzie Davis) is eager to run from her problems (namely her institutionalized mom, played by Joely Richardson) in the city and start a new life hidden away in Maine’s wild countryside. When she arrives she’s greeted by the dour housekeeper, Mrs. Grose (Barbara Marten) and the delightful little girl, Flora (Brooklyn Prince). A couple of days later the boy, Miles (Finn Wolfhard), is expelled from school and joins the ladies in the mansion. With his arrival comes doom, gloom, and maybe a phantom or two.

I can’t say enough about how perfect this cast is. Davis is totally believable as the warm, loving young lady who wants to do her best in her new endeavor, while Marten is truly chilling as the icy matriarch who stands between her and the children. Prince and Wolfhard are aces as the capricious kids who may or may not be possessed by the ghosts of employees-past. While the casting of Richardson as Kate’s mom is no doubt a nod to the fact that her grandfather Michael Redgrave was in The Innocents and her aunt Lynn Redgrave starred as the nanny in a 1974 adaptation of Turn of the Screw, Richardson is excellent and her small but pivotal role stands on its own.

While I mentioned the movie is tamer than it could be given the subject matter (no spoilers here, just in case you have not read the novel or seen any of the 40 film and TV movies), I do appreciate the rising uncanny atmosphere Sigismondi maintains. Kate’s situation continues to build in suspense, and while there’s no gore there’s never a dull moment. What’s more, the screenwriters (Carey W. Hayes, Chad Hayes) refrain from winks at the camera or cheeky slang, which is a welcome change from the usual PG-13 horror fare.

While the tension builds, it does so in the Devil’s playground of a practical location. It’s believable because it’s real. The huge house is over a hundred years old, featuring cavernous chambers, long hallways, and treacherous staircases. Sigismondi and her team put great care into the color scheme and décor, which begins to fray in sync with the crumbling sanity of the souls within the walls. The exterior, with its horse stable, pool, and ancient trees, is also used to its greatest advantage and sets the stage for quite a few scares.

My only criticism about the movie is I wish it had been a bit weirder. If you look at some of Sigismondi’s other work—from the vintage video of Marilyn Manson’s “The Beautiful People” to her spooky 2017 short film “The Possessed”—you can see she has a penchant for bizarre surrealism. The Turning feels as though it was watered down by studio suits who wanted to make sure it would have broad appeal.