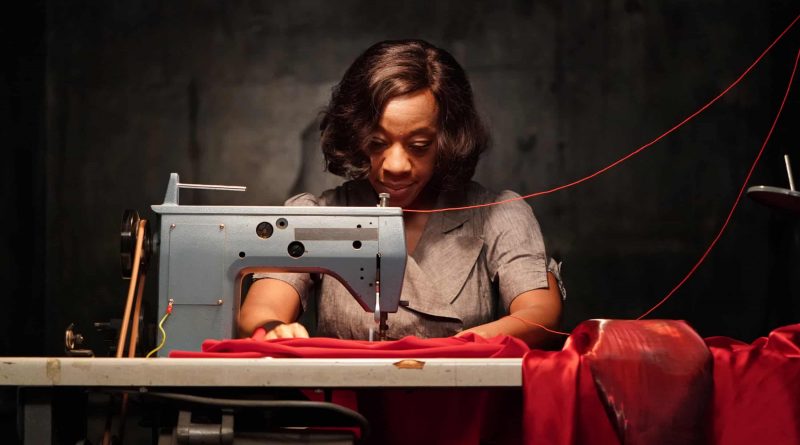 Stitch together John Carpenter’s They Live with Tobe Hooper’s I’m Dangerous Tonight then weave in Paul Thomas Anderson’s Phantom Thread and you’ve got In Fabric, the latest (but not greatest) offering from Peter Strickland—a surrealist British writer-director who is today’s answer to Nicholas Roeg and Ken Russell.

In Fabric is technically a horror movie, but it isn’t a stab-n-slab and no one is chasing after a serial-killer or hunting ghosts. No, this flick is of the more cerebral ilk with few thrills but plenty of chills. Mixing 70s and 80s nostalgia with Gothic imagery and tongue-in-cheek farce, Strickland’s cautionary yarn follows the unfortunate wearers of a beautiful “arterial red” chiffon and silk frock from the moment the cash register cha-chings to the closing of their caskets.

Oscar-nominee Marianne Jean-Baptiste plays Sheila Woolchapel, a middle-aged divorcee who works as a drone in a dreary bank and is regularly dressed-down by her micromanaging bosses (Julian Barratt, Steve Oram). At home, there’s no respite as she’s disrespected by her sullen teenage son (Jaygann Ayeh) and his dour lover (Gwendoline Christie) day after day. Sheila decides that she needs to cut loose, so she buys that racy red number and puts an ad in the lonely-hearts personals. But of course, things go from bad to worse for poor Sheila.

Thames Valley Dentley & Soper department store, supervised by the haughty Miss Luckmoore (Fatma Mohamed), and who may or may not be the devil’s disciple, sets the stage for all kinds of retail mayhem. This brunet bombshell is a persuasive sales gal, too; when Sheila balks at buying the daring dress, Luckmoore baffles her with bullshit: “The hesitation in your voice seems to be an echo in the recesses of retail.” Once the closed-sign goes on the door, the clothes come off and the after-hours party begins. Wrinkle-magnet manager Mr. Lundy (Richard Bremmer) and his all-female staff dive into some strange sex rituals with the mannequins and nothing is left to the imagination.

The department store is marvelously made, feeling like something straight out of a sumptuous giallo film. (The score, too, is deliciously decadent in its homage to those slashers of the 70s—kudos to Cavern of Anti-Matter for their note-perfect music.)

One size fits all, so once the demonic dress is done with Sheila it wraps itself around nebbish washing machine repairman Reg Speaks (Leo Bill), who is forced to wear the garment at his stag party. He soon passes it along to his bride Babs (Hayley Squires), who quickly succumbs to its spell and goes straight to hell.

There’s a lot of sly humor woven throughout In Fabric’s story but after Jean-Baptiste leaves the screen, things take a tedious turn. While I adore intoxicating imagery as much as the next cineaste, I do appreciate story and character arcs as well. Fortunately, there is a satisfying upshot at the end.

While it may not be his best film—in my opinion, Berberian Sound Studio (2012) and Duke of Burgundy (2014) are better—Strickland’s fashionably freaky In Fabric is nonetheless excellent. Perhaps one of the best of this year (that is, if you’re into slow-burn retro-arthouse psychological-tragicomedies) and well worth a look.