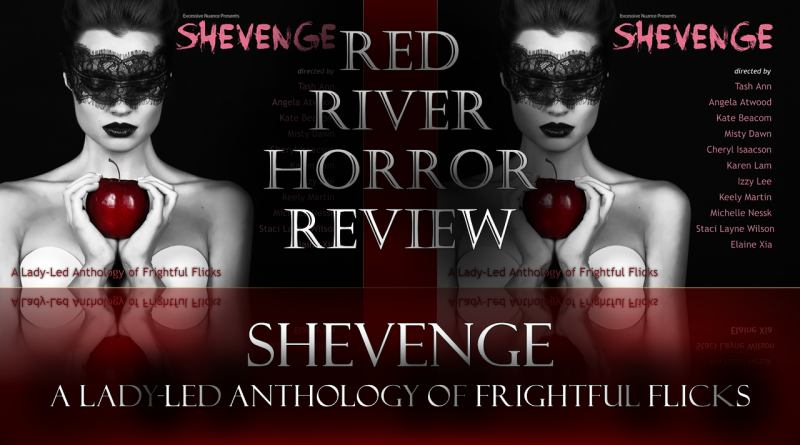 Shevenge is an all-female directed horror anthology with the theme of revenge. Throughout the nearly two hours it takes to watch, viewers are treated to 12 different tales that hit the many sub-genres of horror. Even better, net profits of Shevenge are going to the Time’s Up Legal Defense Fund. So be sure to read all the way to the end to find out how you can watch AND contribute to a good cause.

If you’re looking for the Final Girls scenario, you’ve come to the wrong place. The ladies in Shevenge are in charge, and it’s time for some payback.

Part One: Kiss and Kill

First in the lady-led anthology is Psycho Therapy, starring Brooke Lewis as Tonia. Tonia is a patient of Dr. Walsh (Ricky Dean Logan) and the usual psychiatrist/patient session takes a turn into a tense conversation about why men cheat. In the end, viewers have a satisfying answer.

For a Good Time, Call… is totally not an upbeat tune. It is one of the only films in the Shevenge anthology written by a male (Christopher Hallock). Alex (Sean Carmichael) plays the popular modern game of filming himself in bed with Alice (Diana Porter). Naturally, the video gets leaked online. Alex doesn’t ask for his next target Sylvia (Tristan Risk) to find him, but the dirty message on the wall of the bathroom stall tells him to give her a call. He ends up doing that, but not by choice.

All Men Must Die interjects some animations and some loud music. For nearly 35-seconds, Kyle (Alex Song) proves she’d do anything for her friend Prudence (Lacey Jeka) on her birthday. Maybe not all, but most men will die in this one.

“Oh I’m just a girl, take a good look at me…” Sorry Gwen. There’s no doubt that Michelle Nessk’s Just a Girl is a bit darker.

Just a Girl is more experimental, and has to be seen, heard and interpreted by the viewer. This short begins with a man physically and verbally abusing a woman. From there, many words are spoken at the same time, with frenetic images of women flashing on-screen. By the end, the message seems to come into focus.

Lady Hunters balances some humor with the very serious crimes of men that commit rape and humiliate women on camera. Hilde (Angela Atwood),
Eleanor (Lara Buck) and Maya (Marianne Hardart) bring a satisfying conclusion to the men who commit these disgusting acts.

Jessi (Palm) leaves her daughter at home and meets The John (Hampel) in his car. What should be a regular prostitute meets client, gets paid and goes home scenario turns into a bloody interrogation.

Kathleen Wilhoite stars in The Fetch (No…not the game you play with your pooch). In this Fetch, a mom makes a dangerous plan to take out a sexual predator in a world of water scarcity.

Lexico (powered by Oxford) describes the “glass ceiling” as “An unacknowledged barrier to advancement in a profession, especially affecting women and members of minorities.”

The appropriately titled Glass Ceiling shows viewers just what happens if that profession happens to be contract killing. There are a lot of well-directed action sequences in this one, and Yurie Collins and Brooke Walter shoot to kill as our leading ladies.

Doll Parts hits you right away with a bit of a twist in the first interaction Edward (David Lewis) has with some hitchhikers. Then another twist presents itself as we find out he’s a cold-blooded murderer with a necrophilia problem. Will Edward get what’s coming to him when he picks up Evangeline (Sarah Lind)?

The title of this anthology is Shevenge, right?

Loosely based on the Commonwealth vs. Michelle Carter case, Karma is a Bitch shows just how mean-spirited people can be. Charlotte (Danielle Inks) spends almost the entire time convincing Jane (Anastasia Elfman) to commit suicide. She even runs through the different methods of carrying out the act, and how some of those methods might fail.

The subject matter of this particular short is a dark one, but fans of the horror genre might appreciate its conclusion.

Part Four: Love You to Pieces

The delectable Recipe # 42 turns from sweet to sour in a hurry. Lisa (Jennimay Walker) is preparing a nice meal for her new neighbor Samantha (Elizabeth Izzo). While Samantha is venting about her problems, Lisa asks: “have you ever been raped?”

Unfortunately, once the awful “R” word is spoken, it’s difficult to move happily to the next point in a conversation. But as the dialogue between the two women continues, Lisa perks up a bit when it comes time to serve dessert.

Metamorphosis is a real treat, and a bit different from the rest of the shorts in Shevenge. Set in Hong Kong in the 1990s, this subtitled tale is of a wife May (Cici Lau) that finally sees an end to her husband’s abuse. When he is accidentally killed by their daughter Albert (Monica Cho), mom disposes of dad nastily and efficiently.

Cici Lau is terrifying in this one. She definitely needs to act in more horror flicks.

The Leftovers is simply a sign off from our hostess Vanessa M. Gomez. Throughout the Shevenge anthology, Ms. Gomez introduces the four different segments of the film with a bit of comedy and sass.

Indie and (some) independent films are made on very limited budgets. Throughout Shevenge, there are times when there is a change in audio or visual quality from one short to the next. It doesn’t take away from any of the storytelling, it’s just apparent that some of the filmmakers had better access to higher-end equipment than others.

When it’s time for gore, though, the practical effects across the board are pretty impressive. There are moments of dark subject matter and there are moments of playful lightheartedness. While it would be easy to take the route of being preachy and making the statement that all men are inherently bad, Shevenge instead lives up to its name and genre and exacts revenge on the men on-screen that are actually bad.

Finally, true horror fans — both male and female — will very much appreciate seeing some of their favorite leading ladies of horror both past and present. Shevenge is fun, enjoyable and scary, and easily floats its way to three boats.

Even if you’re a dude like me, you can still watch, enjoy AND make a contribution to the Time’s Up Legal Defense Fund. How? Shevenge is a passion project for horror director/producer/writer extraordinaire Staci Layne Wilson, with net profits headed to Time’s Up.

If you have Amazon Prime, please click this link (https://www.amazon.com/dp/B07W16WKGX) to watch. That is one way to make a contribution. Or, if you’d like to purchase the DVD, click https://www.stacilaynewilson.com/online-store/Shevenge-A-Lady-Led-Anthology-of-Frightful-Flicks-DVD-p145391712.