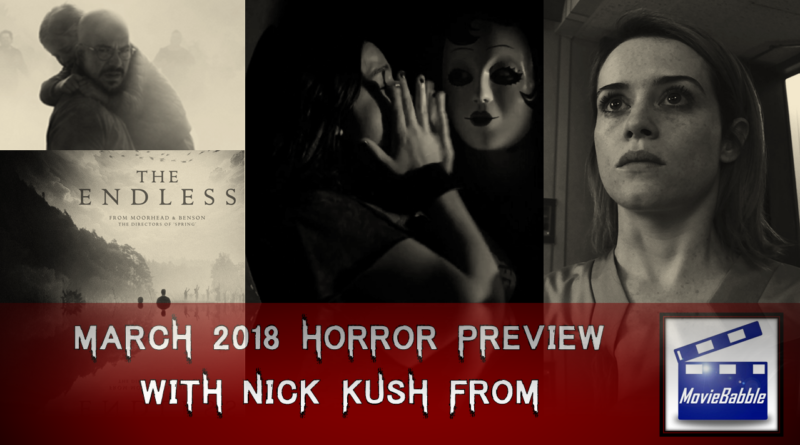 March is somewhat of a quiet month in horror.  However, for those films coming to cinemas (or streaming services), there’s a lot to get excited about in the horror/thriller genre.  From slasher sequels to psychological thrillers, there’s a film in March for just about every strain of horror fandom.  But enough lead-in, let’s take a look at the March 2018 horror preview, shall we?

Netflix continues its push for more content with the French film Les Affames or Ravenous to American audiences.  The streaming giant purchased the film following the Toronto International Film Festival back in September after it opened to great reviews from top critics, making it a solid get for Netflix to present to international streamers.  Following a small, remote town in Quebec, Ravenous shows individuals as their bodies deteriorate into a zombie-like state, forcing those that remain unaffected to retreat to the woods to find others like them.

While the zombie subgenre might be a little tired to some, top critics are claiming that Ravenous takes an idiosyncratic, eclectic approach that is very much appreciated.

The Strangers: Prey At Night is finally coming to theaters after years of work and development.  This film is the follow-up to the 2008 original that was a hit among serious horror fans.  Keeping up with the theme that a group of mask-wearing killers pick their victims somewhat at random, we follow a completely different family led by Christina Hendricks as they take a trip to a mobile home park to visit some relatives.  But, when the family arrives to find the mobile home park completely deserted, things go awry.  To put it bluntly, there’s some killing that occurs thanks to some creepy figures in masks.

General audiences might not find much to chew on in this belated sequel, but fans of the first film should be able to find plenty of gory entertainment.

Steven Soderbergh constantly works to challenge himself as a director, and Unsane is one of his most fascinating attempts yet.  Starring Claire Foy, Unsane follows a woman who accidentally commits herself to a psychiatric care after seeking shelter from her stalker.  When she begins to see her stalker at the hospital, she can’t figure out whether or not she’s actually crazy.

Soderbergh shot the film with iPhones and yet still managed to keep a cinematic flair rather than a found footage aesthetic.  This movie is too weird in every sense of the word to not check out!

The Endless is getting a limited release in theaters on March 23rd.  This independent psychological thriller follows two men who return to a death cult they fled from over ten years ago.  Weirdly enough, the two find out that there might actually be some truth to the cult’s dangerous beliefs.

Children of the Corn: Runaway – March 13th (VOD and DVD)