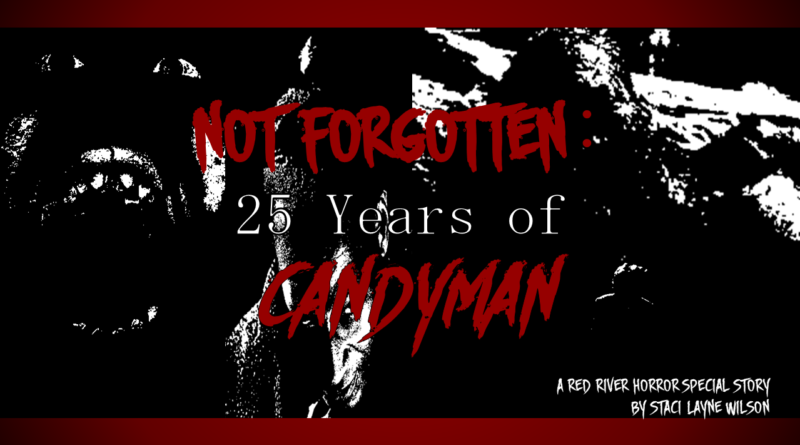 If Candyman hadn’t been released 25 years ago, would Get Out be winning so many awards and making “Best Of” lists in 2017? That’s debatable, but the answer is: probably not.

While the 1970s boasted some gritty urban heroes onscreen, they were replaced in the following decade by over-the-top, all-American leads like John Rambo in First Blood. Even horror movies seemed whitewashed. Classics like Poltergeist and A Nightmare on Elm Street existed in the same generic suburban la-la land as Ferris Bueller’s Day Off and Pretty in Pink.

Candyman came out in 1992, and it revitalized the adult-oriented horror film with its mature characters, complex story, and stark subtext. Based on a short story by Clive Barker, the terrifying tale follows skeptical student Helen Lyle (Virginia Madsen), who meets Anne-Marie McCoy (Vanessa Williams) while researching superstitions in Chicago’s notorious Cabrini-Green projects. From Anne-Marie, Helen learns about the “Candyman” (Tony Todd), a hook-handed figure of urban legend who is believed to be responsible for a recent murder. After a mysterious man matching the Candyman’s description begins stalking her, Helen comes to fear that the legend may indeed be real.

While Candyman was beloved by gore-hungry horror fans, it was initially dogged by racism claims. It was written and directed by white Englishman—Barker, and then-TV and music video maven Bernard Rose—and its black characters were either killed…or killers. At the film producers’ request, Rose met with leaders of the NAACP before shooting the film over concerns of racism.  He also sought input from members of the cast.

Director Darin Scott, who cast Todd in his 1998 film Caught Up, is a fan of Candyman. When we asked him why the movie holds up a quarter of a century later, he said, “It’s a great story because it shows how the dispossessed are easier to victimize. And whether the dispossessed are set in England, as in the original Clive Barker story, it is rather easily transferred to the Cabrini-Green environment that Candyman takes place in.” When the murders start happening, it’s even scarier because “It’s subtext that the poor and powerless have even less defense against evil, because no one’s going to come to their rescue.”

When it came out, African American filmmaker Carl Franklin (Devil in a Blue Dress) was especially outspoken.  He dismissed the movie, saying it was all based on “white middle-class fears of black people.” This is partially true, but there’s so much more to it than that. As Rose says on the DVD audio commentary, Candyman touches on “the dark heart of American history; a country built on slavery.”

Scott continues, “I remember seeing a little of [the protests] at the time. I ignored it. I didn’t agree. Any of us who made a lot of black films in that era will tell you that the same thing was said about Menace II Society, which I produced, and Tales from the Hood, which I co-wrote and produced. There’s always somebody who’s not going to like how someone is portrayed—if someone’s perfect, they’re too perfect. Not three dimensional. If they’re highly flawed, why did you give them those flaws? Stereotype. It’s really kind of hard to hit the spot.  Even when Denzel Washington did Training Day—he got the Oscar for it and was great—there were people asking: ‘why does he got to be a bad cop?’ We see the same phenomenon today where there’s quite a bit of analysis of minority and female characters, also.”

In 1992, riots rocked L.A. in response to the Rodney King trial verdict, the U.S. military stormed war-torn Somalia, and Mike Tyson was caught up in rape allegations.  At the movies, Malcolm X, Juice and Boomerang were playing. It was a turbulent time, perfect for Candyman’s grand entrance.

His legend is steeped in tragedy. Daniel Robitaille was a free black man in 19th century America who had the gall to not only be successful and wealthy, but to fall in love with a white woman. In return, Robitaille’s hand is cut off by a lynch mob before he’s smeared in honey and stung by a swarm of killer bees. His lifeless body is then burned on a pyre, his ashes scattered across the area that would later become Cabrini-Green. A century later, Candyman comes back to wreak his revenge on anyone who looks into a mirror and chants his name five times.

With all of this being said, some folks just saw Candyman as a damned great horror movie. The 1992 Hollywood Reporter review by Michael Rechtshaffen of Candyman opens with, “So long, Freddy. Take a hike, Jason. Hasta la vista, Chucky. There’s a new bogeyman in town and he makes all other pretenders to the terror throne look like a bunch of cuddly Disney characters by comparison. He’s called the Candyman, but bears absolutely no relation to the guy who can take a rainbow and sprinkle it with dew. This Candyman can elicit some bona fide shivers while the picture that bears his name is high-caliber horror in its purest, most primal form. With the right campaign strategy, TriStar should count on some very sweet returns.”

When all was said and slashed, Candyman was a classic Barker blood-fest and it made bank. The flick was a hit, more than tripling its $8 million budget to take in $25.7 million domestically. It’s raked in untold dollars more in the years since, and continues to top the lists of fans all over the world. (Yet, there’s no Blu-ray release! It’s OOP on DVD, and seldom seen on the streaming circuit.)

Before becoming a bona fide horror icon, Todd had been known for starring in the 1990 remake of George A. Romero’s Night of the Living Dead and for a recurring role in the TV series “Star Trek: The Next Generation.” A chiseled, imposing 6-foot-5 figure with a seductive baritone voice, Todd created a heavy who is part killer and part tragic hero. Todd later called the character “my own personal Phantom of the Opera.” Candyman helped make him a star, a status he’s been enjoying ever since.

As Stephen Dalton of The Hollywood Reporter wrote, Candyman is “a superior slasher movie on the surface, a subversive political parable beneath, it struck a smart balance between pulpy bloodshed and gothic romance, between primal horror tropes and self-aware commentary on the creepy urban legends that we share when we want to scare ourselves half to death. There are hints of Dracula and Beauty and the Beast in the mix, but also Shakespeare and Hitchcock and David Lynch too.”

Scott attributes Todd’s timelessness to a few factors. “Candyman was a gothic villain. He has great intensity. A powerful voice. An imposing size. I kind of think of Tony Todd in the tradition of William Marshall from Blackula; they both have a kind of a dignified power. It’s pretty indelible and it set him up a horror bogeyman for many years.”

Jeffrey Reddick, best known for creating the Final Destination franchise, and most recently writing Dead Awake, agrees that had Todd brings gravitas to the character. “He wasn’t just this scary, demonic force—there was something seductive about him. And you felt empathy for him, but didn’t know why until you heard about the backstory and then you’re like, ‘Oh, poor guy.’ So he was able to bring all that into focus. He wasn’t just an evil person. He was a lost soul who didn’t want to be forgotten. I think that is something of a theme: we, as people, don’t want to be forgotten after we’re gone.”

Camille Calvin, who’s acted in films such as Portraits, The Lincoln, and the true crime series “Unusual Suspects” saw Candyman when it was released—though it was Rated R. “I was pretty young when Candyman first came out and I was extremely excited. It sounded like a fun horror film and when I sat down to watch it, I was terrified. That concept of saying something in the mirror in the dark a few times in a row and they will appear, was something that was very popular at that time. And I remember doing this with my friends at sleepovers. You know, Bloody Mary, Beetlejuice, and then, Candyman. There was no other horror film out like this. This was the first black horror film that I ever saw, and it was a big deal, huge—my entire family watched it together.”

Reddick saw Candyman when he was in college. “I wasn’t sure what to expect of it, to be honest,” he told us. “I was really excited because it had a black killer in it, which I hadn’t seen in a really long time and fantasy horror has always been one of my favorite genres. It seemed to have that kind of element to it: mythology. I was really excited to see Tony Todd as the villain and I was a big fan of Virginia Madsen as well. I’d read all Clive Barker’s stuff. I’d been following the movie because I knew how they’d changed it because they’d added in more of the modern urban element to the story, so I was really excited to see it when it came out.

“I loved it. I saw it five times in the theatre. It’s one of my top favorite films of all time.” Favorite films for Reddick, he says, are the ones that “impact you personally. The whole idea that the villain was this person that had been wronged, meant something to me. I grew up in the South, in Kentucky, so I’d faced a lot of racism. The backstory really struck a chord because for a lot of people that kind of behavior is hundreds of years old, but for me, having a white mother and a black father, I have dealt with things on that level.

“But just as a movie, it is so amazing. Candyman himself was such a classic, iconic creation and I loved the idea that people had stopped believing in him and so he had to basically find somebody to make him real. Virginia Madsen’s performance was incredible. And just the subtext there too as well, there are people dying in the projects and nobody cared. As Helen says, a white woman goes in there and gets attacked and all of a sudden, it’s all over the news. There were just a lot of things – it’s almost hard to talk about them today because everybody’s so sensitive, that if you bring up race, everybody freaks out. It was very relevant for its time and it’s very relevant now.”

Kasi Lemmons, who played the ill-fated Bernadette, recently gave an interview about Candyman to Complex.com, in which she said, “I’m thrilled that I was in Candyman, it has lived on and there are people that love that film. Films come and go so easily and disappear from the memory, it’s very, very common that you see movies, even movies that you think are pretty good, and they don’t have a lasting impact on you.”

While Candyman certainly helped pave the way for ’90s urban horror like Tales From the Hood, and now, Get Out, its themes are, sadly, still relevant today. Calvin says, “The creators of Candyman knew that if they were using a black villain in this horror film, they wouldn’t have to reach far to find a brutal backstory. The horror of the hate crimes that happened in this country is still on everyone’s minds and most certainly made an impression with black viewers. And new filmmakers like Jordan Peele can still strike a chord with today’s audience because racial hate crimes unfortunately are still alive and well in this country.”

Scott agrees. “Well, the way our country’s going, it’s going to become even more relevant for a long time—bad for us, good for Candyman.”