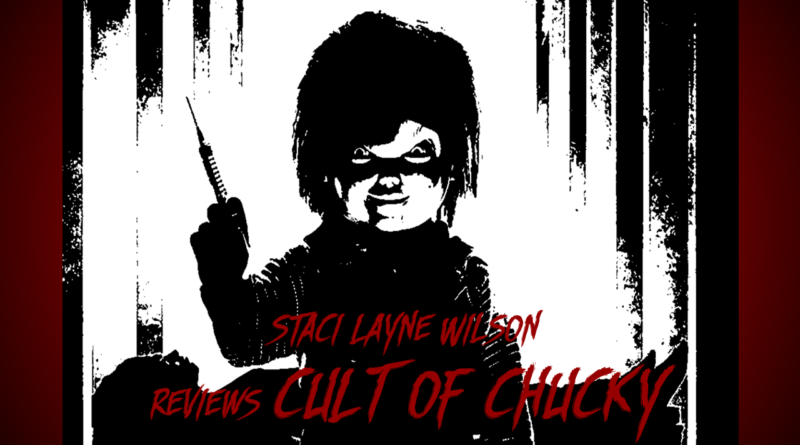 In 1988, Child’s Play introduced a new icon to the slasher genre: An evil doll named Charles Lee Ray, aka “Chucky.” The pugnacious plaything was possessed by the mind and soul of the Lake Shore Strangler (Brad Dourif), a mass murderer who just happened to learn voodoo from a black magician. After the killer was shot by a cop in a toy store, he mustered enough energy to utter an incantation, shooting his dark soul into a redheaded, freckle-faced Good Guy Doll.  And his murder-spree lived on…and on, through several sequels and reboots.

In Cult of Chucky (on disc and Netflix on October 3), things ramp up considerably when the doll learns a few new voodoo spells and unleashes his supernatural wrath in a remote mental hospital.

Picking up shortly after where Curse of Chucky left off, Chucky’s most formidable nemesis, Nica (Fiona Dourif), is confined to a mental institution, slowly trying to come to terms that she only imagined the slice-and-dice doll and that she herself committed all those murders. But deep down, she knows Chucky is real. And he is coming back. There are a couple more returnees to the melee: Jennifer Tilly (as Chucky’s wife Tiffany, and herself), and Andy Barclay (Alex Vincent, from Child’s Play and Curse of Chucky).

The gothic, gleaming white hospital setting provides the perfect backdrop for a bloody rampage; it’s clearly an homage to horror of yore ala The Snake Pit and Visiting Hours. What’s more, there are nods to classic chillers (Psycho, One Flew Over the Cuckoo’s Nest, and Carrie to name a few) which are sure to delight the more erudite cinephiles. The movie is meticulously directed by Don Mancini (also the writer and the creator of Chucky) and it’s lavishly shot by Michael Marshall (Ginger Snaps Back, Curse of Chucky). FX wizard Tony Gardner and his puppeteer-team bring Chucky to life once again, with movement and facial expressions minute and CG-free.

Minor miffs: The story is confusing at times (I had to run the Blu-ray back more than once), and there’s not nearly enough Andy (it’s not like Vincent is a bad actor, so I don’t know why he’s not in more scenes).

On the plus side, Chucky evolves quite a bit in this film and adds new and exciting dimension to the wicked world in which he thrives. Both Dourifs kick things up a notch as well, but it’s Fiona who’s the standout – Nica’s put through an emotional and physical wringer and she emerges with unexpected strength. What’s more, the kills are gory, ghoulish, and gleeful as can be. Slasher fans will not be disappointed!

The Blu-ray has tons of goodies, including a cool mini-doc called The Dollhouse (directed by Gardner’s daughter, Kyra Elise), deleted scenes, and commentary by Mancini and Gardner.

Other reviews by Staci Layne Wilson for Red River: