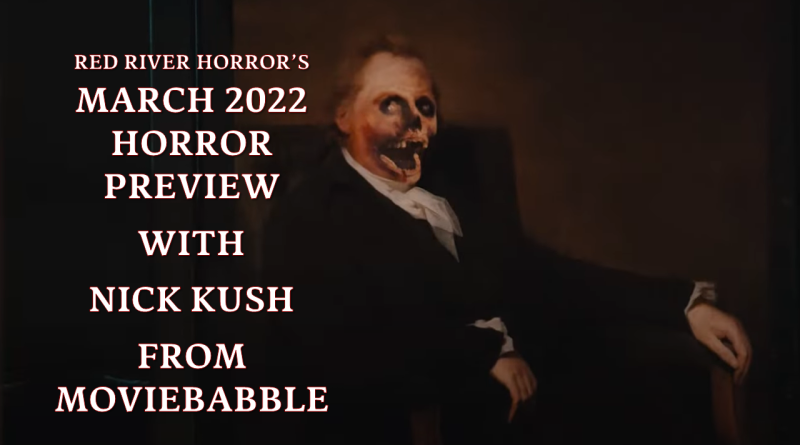 March is gearing up to be a fun month at the movies. Outside the realm of horror, the month starts off with one of the best movies of the year so far in Kogonada’s After Yang, and there’s also a little movie about a certain man in black tights.

Here’s what’s in store for us this month in the March 2022 horror preview:

Fresh left this year’s Sundance Film Festival as one of the buzzier titles, mostly because of what Sebastian Stan is up to in it. The first act of Fresh is fairly standard: a woman struggles to find a worthwhile man on dating apps, until she meets a disarmingly charming man in Steve (Stan). From there, Fresh takes a hard turn, one best not discussed here. So maybe just dive right in!

Fresh will be available on Hulu on March 4th.

The film is also most well-known for its multiple delays. Disney originally planned to releases the film theatrically back in November 13th, 2020 under their 20th Century Studios label, only to then push it back to August 13, 2021, then January 14th, 2022. And finally, after taking it off the releases schedule entirely, it was announced that Hulu would drop the film on its service in mid-March.

Could it be a mess? Absolutely, but this is the kind of mess that gets me very excited.

Deep Water will be available on Hulu on March 18th.

Another buzzy Sundance title was Mariama Diallo’s Master, a triptych study of three Black women at a fictional elite New England college. Gail (the always great Regina Hall) is the first Black master in the school’s history; Jasmine Moore (Zoe Renee) is a struggling freshman; Liv (Amber Gray) is the other Black professor at the school. Oh, and the college is built on the grounds of the Salem witch trials. Not great for all involved.

Comparisons to Get Out are bound to run rampant as Master blends chills with crystal-clear sociopolitical commentary, but Diallo’s debut seems to have enough on its mind to start its own conversations.

Master will be available on Prime Video on March 18th.

The last major title to watch out for this month is Ti West’s X, which looks like a Texas Chainsaw Massacre movie minus Leatherface. (Hopefully it’s a little better than the actual TCM movie released last month.)

Set in 1979, a ragtag crew (including Jenna Ortega, Brittany Snow, Mia Goth, and Kid Cudi) set out to rural Texas to make an adult film, making their way onto an elderly couple’s property under the guise of just needing a place to stay. They quickly learn that this couple is very…odd. And when they catch the crew making their film, things quickly get out of hand…

At this point, if Mia Goth is in a movie, you know it’s going to be something wicked.

X will be available in theaters on March 18th.

The Weekend Away – March 3rd (Netflix)