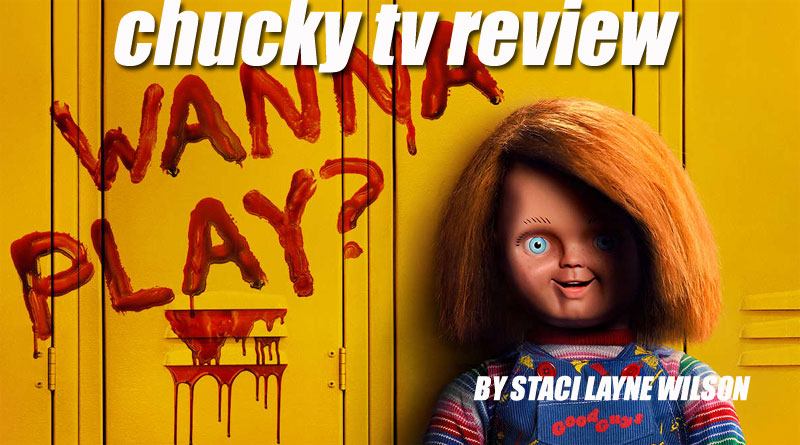 Chucky is a unique horror film villain in that he’s really the only one who is not human—Leatherface, Jason, Freddy, and Michael Myers were/are all men. Chucky (voiced by Brad Dourif) is a creepy carrottop plaything who is possessed by the soul of a dead serial killer named Charles Lee Ray, so he has some human elements but he’s not made of flesh and blood. Via Child’s Play, Chucky burst onto the bloody scene in 1988—after The Twilight Zone’s Talky Tina but way before the doll du jour, Annabelle. He’s a unique character, imbued with all kinds of thoughts and emotions (most of them respectively dirty and wicked).

Following a slew of cinematic and streaming Child’s Play sequels, Chucky is back with his own television series, and there are several must-have key players involved—creator Don Mancini (who directs the first episode), the aforementioned Brad Dourif, his daughter Fiona Dourif, Jennifer Tilly, and Alex Vincent. We also have Final Destination’s Devon Sawa in the opening episode, which is entitled “Death by Misadventure.”

The story follows morose, artistic 14-year-old Jake Wheeler (Zackary Arthur), as he adjusts to the loss of his mother and tries to fit in at school. He’s not a popular kid by any means, but he does have a few friends and a budding love interest in Devon (Bjorgvin Arnarson). Chucky is set in present-day Hackensack, New Jersey, and kicks off with Jake as he buys the Good Doll at a yard sale so he can use its head for one of his elaborate “found art” sculptures. Needless to say, Chucky would rather take heads than give up his own, so he lets his new “friend till the end” know what’s up right away. The diminutive doll goes on a stalk-stab-slab spree, causing Jake all kinds of trouble as he desperately tries to stop the murders and hide his own connection to the wisecracking toy of terror.

It took a little while to get hooked into the series for me—mainly because I am beyond the demographic age for this sort of thing; the trials and tribulations of teens tend to bore me—but as it unfolds, Chucky offers up some new toybox treasures for fans of the franchise. For instance, in a series of flashbacks, much more is revealed about Charles Lee Ray. We learn the origins of his evil and are given a ringside seat to his first kill.

When it comes to the gore, Chucky delivers. He’s also as inventive as ever with his one-liners when delivering the old coup de grâce. He’s got his trusty blade at all times, of course, but in addition to that, he employs everything from electricity to otherwise innocent household appliances to get his point across. Fortunately, the show’s production budget is clearly up-to-par, so these scenes are particularly effective and hard-hitting. As ever, the brilliant special effects wizard and puppeteer, Tony Gardner, zings real-life believability into the dastardly doll.

Chucky features the usual teenage cast of cliched characters: the bitch, the jock, the brain, and so on. But as the story unfolds over each 47-minute episode, we see some thoughtful nuances and get some further insight into their rather complicated pubescent lives. The protagonist, Jake, is slightly strange even before he buys the Good Guy doll in order to decapitate it, but thanks to a sympathetic, shaded performance by Arthur, we do like him—he’s somewhat reminiscent of young Norman Bates (Freddie Highmore) from Bates Motel (somewhat… be aware that Chucky is a more lightweight series).

Overall, Chucky does a good job of satisfying bloodthirsty fan mythology while simultaneously opening the coffin for new viewers.