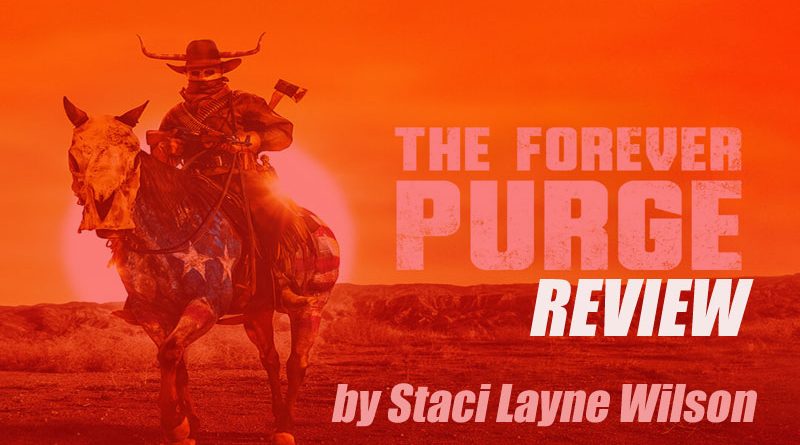 When The Purge debuted in 2013, it was much-anticipated – the dark, dystopian horror story about man’s inhumanity to man seemed to really have a sociopolitical message about violence and what it can do to people – but the first movie turned out to be more of a home-invasion thriller. However, as the series progressed, the characters and situations became more complex. The Purge: Anarchy came out a year later, and The Purge: Election Year followed. Then we had The First Purge in 2018, plus a television series that lasted for two seasons. And now we have The Forever Purge, coming out on Independence Day Weekend – which is fitting since this is the most blatantly political entry of them all.

Our heroes are Adela (Ana de la Reguera) and Juan (Tenoch Huerta), a couple who snuck across the border from Mexico to Texas ten months ago. They’re now settling in to their new community, taking care to learn the language and making themselves useful. Adela has a menial job at a meat-packing plant, while Juan works on a ritzy ranch owned the Tucker family. Cowboy patriarch Caleb (Will Patton) has several immigrant employees, but he’s most impressed by Juan’s horsemanship—which makes his son, Dylan (Josh Lucas), boil over with envy and brings out his latent prejudiced side.

But there’s not much time to vent, because it’s time for the annual government sanctioned murder-spree known as the Purge. The Tucker estate is protected with metal armor that slides over every window and door, and the basement is stocked with guns and ammo “just in case.” Meanwhile, Adela and Juan have gone to community security space for immigrants that’s being patrolled by several armed guards. It’s tense, as they listen to gunfire and the screams of anguish from those not so lucky, but finally, at dawn, the Purge ends. Or not. You see, some Americans (particularly white-supremacists) believe that never-ending violence and anarchy is the only way they’ll thrive, so all bets are off and they keep on going after sunup.

No one is safe—not the wealthy but liberal ranchers, and especially not the brown-skinned people in town. Before long the Tuckers and Adela and Juan (who apparently don’t have a last name) are forced to band together and fight for their lives as the Lone Star State spirals into chaos and the entire country begins to disintegrate around them. Where to go? That’s right: sneak across the Mexican border going the other way! If that’s not a sledgehammer of a message, I don’t know what is. But wait – there’s more! How about a scene showing a field reporter calling the purge “a national holiday celebrating our American freedom” just before getting shot in the head, and another in which a racist inciter calls his wife “mother” (paging Mike Pence!).

As I mentioned, The Purge films have been getting progressively more political and hence, less in the genre of escapism horror. Sure, some scary films have had sly agendas by using zombies, boogeymen, and ghosts as metaphors for other things, but at least they’re (usually) clever and subtle. The Forever Purge feels like a cross between the evening news and a biased drama. Yes, there’s blood and violence, and one kind of cool Saw-like trap, but this is not, in my opinion, a horror movie and it is not the least bit entertaining.

On the plus side, the actors are excellent. de la Reguera and Huerta are the heart and soul of the film, and we do care about them thanks to a believable sense of connection between them. Patton is a character you care about too, and he has some of the best lines. Lucas is always great, and he does have a reasonably interesting arc. The villains are not fully-realized, and there’s one after another, which markedly dilutes the dread and suspense overall.

The Forever Purge has some well-choreographed action set pieces, but it’s so heavy-handed and pessimistic, there’s zero entertainment value. I might as well be watching the evening news—at least that’s only a half-hour.