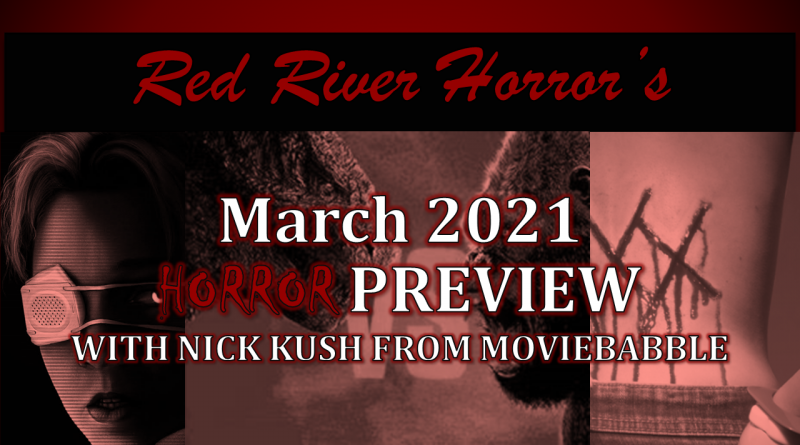 This month marks one of the biggest straight-to-streaming releases we’ve ever seen with Godzilla vs. Kong coming to HBO Max. I don’t know about you, but after almost of year of living in quarantine, sitting back, relaxing, and watching a giant monkey fight a nuclear-powered reptile sounds like a special treat.

Still, I have my sights set on a some of the smaller genre films coming out this month. There are always a few hidden gems waiting to be discovered, and March might just have a few.

In Come True, a runaway teen takes part in a university study. The scientists tell her that all she has to do sleep, and they’ll measure her dreams once she gets into her REM cycle. The test seems innocuous at first, but she soon realizes her mind is being used as a channel for a terrifying new discovery.

Come True premiered at last year’s Fantasia Film Festival, and has since received praise for its mind-bending, haunting imagery. Reality and hallucinations being to intertwine and cave in on each other, that is until the film becomes wholly bizarre in its climax. Anthony Scott Burns’ sophomore feature just might be the “sleeper” hit of the month. (I couldn’t help myself.)

Come True will be available in theaters and on VOD on March 12th.

Seldom does a movie capture my attention with two words. But in the case of Slaxx, that’s all I need! Shudder seemingly becomes more impressive each month with the strange, kooky, and usually vile movies they find and place on their service. While Peter Strickland’s In Fabric, the last notable movie about killer clothes (specifically, a bright red dress), took on aspects of Dario Argento and David Lynch’s films, Slaxx appears to embrace its kitschiness, mixing gruesome violence and absurd humor. (Apparently, the deadly denim jams out to Bollywood music? Hey, I’m here for it.)

Frankly, I should have stopped at “killer jeans”. What more information could you possibly need to be sold on this movie?

Slaxx will be available on Shudder on March 18th.

The time has come for the climactic showdown between two of the most iconic movie monsters ever conceived. Godzilla vs. Kong isn’t the first movie to pit the behemoths against each other (you’d have to go all the way back to 1962 for that), but it will be the first time a Hollywood studio has produced one of their meetings in its entirety.

On the other hand, we do get to see Godzilla fight King Kong, which at the very least should make for some fun moments to watch on YouTube in the years to come. Let’s just hope the human characters don’t get in the way of all the mayhem as they have the previous MonsterVerse installments.

Godzilla vs. Kong will be available on HBO Max for one month starting on March 31st.