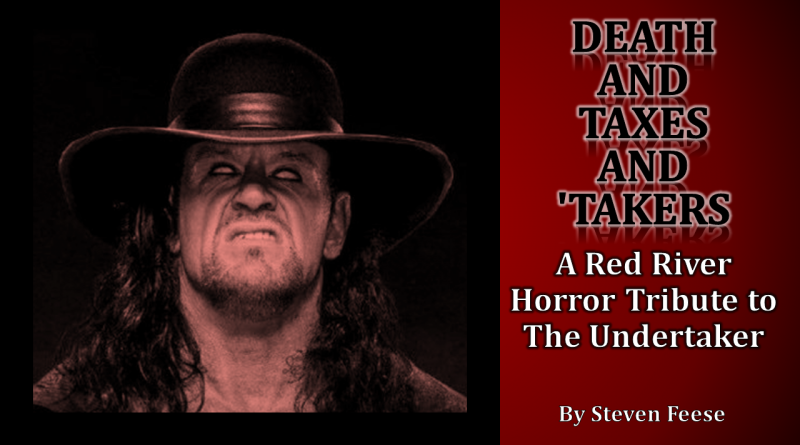 Paul held that knowledge inside for 20 years, all the while mentoring The Undertaker and grooming him to be a dominant force in the World Wrestling Federation (WWF), but there was a secret that he held inside. The Undertaker’s brother, Kane, did not perish that day. Kane was alive, and Kane was coming for revenge….

I do not have many fond memories of The Undertaker’s early career in the World Wrestling Federation. When The Undertaker made his debut at the 1990 Survivor Series I was only 2 years old.

The moment has gone on to be replayed and highlighted for decades and has scared many generations of viewers. He was a multi-time WWF World Champion by the time I came to know The Undertaker, and to get to my story, we will need to flash forward to January 1998.

As a pre-teen, I was introduced to the Undertaker at the Royal Rumble event in 1998. The Royal Rumble is one of the “Big 4” events the WWF promotes each year and is the start of “WrestleMania Season”, which runs from late January until March/April. Coincidentally, the 2021 Royal Rumble is this Sunday, January 31st.

On this night 23 years ago, The Undertaker faced Shawn Michaels in a Casket Match when the winner would place their opponent inside of a casket and shut the lid. The match was very fitting, all things considered. I was not sure what to expect from The Phenom (one of his many nicknames), but when the arena went dark on my TV and the purple lit smoke billowed from the entrance, I was fascinated and ready for whatever was coming.

A towering man cloaked in a black robe came walking down the aisle looking like he could have been straight out of a horror movie. His life was a horror movie. Living with the knowledge that you killed your family can only breed a monster, right? I guess I was wrong because everyone was cheering this man. They were ecstatic for a man with a teardrop tattoo on his cheek, tattoos covering his entire body (including his throat) and dressed like a satanic priest. This man was the good guy?! I do not know if I “got it” right away, but as the night went on, I was as big of a fan as everyone in that arena. I cheered on The Undertaker as he tried to win what I would find out was his potential 3rd title as World Champion. The purple lined casket was open, and The Undertaker was ready to finish the match with his devastating Tombstone. Undertake set him up, and there it was!

Shawn Michaels was in the casket and all The Undertaker had to do was close the lid. A few other wrestlers entered the ring and attacked The Undertaker with the intent of costing him his rightful victory. Suddenly, the lights went out. A creepy piano tune starts playing over the arena’s loud system as the commentator announced that “It’s The Undertaker’s brother, Kane, and all hell is going to break loose”.

I was speechless seeing Kane’s entrance for the first time. A full body suit except for his left arm. A mask covering his face. All of this was from the “burns” he received in the fire that The Undertaker set all those years ago. Kane laid waste to the men who had attacked The Undertaker, and it seemed like he was helping his brother. An unholy alliance was starting in the ring…and then it happened. Kane attacked his brother. Kane delivered The Undertaker’s own move, The Tombstone, moved him into the casket, and locked it shut.

Kane was aligned with Paul Bearer, who once mentored The Undertaker. As they rolled the casket from the ringside, the camera caught a glimpse of gasoline canisters and an axe. Kane began hacking away at the casket with said axe. Blow after blow. Strike after strike. How was The Undertaker going to survive this? When I thought it was finally over, I saw Kane reach for the gasoline. “He can’t survive this?” I thought to myself. While Paul Bearer lit the matches, Kane dumped each canister on the casket. Paul handed the lit matches to Kane, and as the event went off the air we were treated to a fully engulfed casket.

I don’t think I missed a single episode of WWF Raw, the company’s flagship show to this day, in 1998. I needed to know what happened, and they kept me hooked week after week. The Undertaker was not the only one keeping me hooked, we had “Stone Cold” Steve Austin in his prime at this same time, but he was only one of the “must see” attractions each week. As I mentioned, the Royal Rumble is the start of “WrestleMania Season”, so the storyline continued until that year’s event where Kane and The Undertaker battled one-on-one for the first time. As the calendar continued to roll into the summer, the legend of the Undertaker, and his death toll, grew further.

It is a moment that has been replayed in my head 1000 times and on my TV 1000 more. I wore the VHS tape out watching the massacre repeatedly. It was the night that The Undertaker threw Mankind off Hell in a Cell, and Mankind plummeted 16 feet through an announcer’s table (to steal a reddit meme).

Hell in a Cell is a match where there is a roofed cage over the ring and the outside area. It is meant to be contested with the 2 participants locked inside, but this time they both started on the TOP of the cell.

Just over a minute after the match started, I saw a man die on live TV. “GOOD GOD ALMIGHTY!! THEY KILLED HIM!!” one of the commentators screamed “AS GOD AS MY WITNESS, THEY BROKE HIM IN HALF.” This moment may be the most replayed in WWF history.

Mankind (Mick Foley in real life) went on to lose teeth, suffer a concussion, and frankly, shorten his life span that night. Though he did not die, he paid for his sins at the hands of The Undertaker, and The Phenom legend was further cemented.

The years passed and The Undertaker continued to be the most sinister man in the World Wrestling Federation. He formed his “Ministry of Darkness” where, among other sadistic acts, he tied a noose around an opponent’s neck and hung said opponent from the roof of the Wells Fargo Center in Philadelphia (then known as the First Union Center), he kidnapped and tortured the owner of the World Wrestling Federation’s daughter and attempted to marry her by the will of Satan, and he crucified the aforementioned “Stone Cold” Steve Austin on live TV.

As the turn of the millennium came, The Undertaker disappeared for a few months, only to return looking more like a member of a Sons of Anarchy spinoff than the “Deadman” he was before. Though his look changed, his demeanor stayed the same. Instead of sacrificing people, he was now dragging them behind his motorcycle that he would ride to the ring. He would spit his chewing tobacco in wrestlers’ drinks making them consume said spit, and he would just brutally assault anyone who stepped in his way. He was still the villain, and my love for him continued to grow.

His “Deadman” persona would come back just a few years later in 2004, and we would come to know that version of The Undertaker up until his retirement in 2020. He never was as sadistic as he was in the late 1990’s, but he became a legendary man whose career lasted 30 years in an industry where many do not even last 30 months.

In recent months, The Undertaker has “taken off” his ring persona like he never has in the past. From Hot Ones to The Joe Rogan Show and even Christian Fellowship Retreats, The Undertaker lives on in a new stage of his life with less horror and more normalcy. The Legacy of The Undertaker will live on forever, but the villain he was may now Rest in Peace.