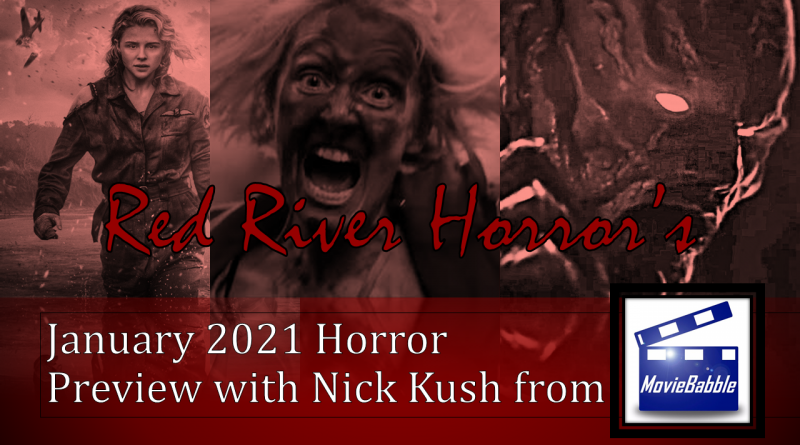 In a normal year, January is the absolute worst for horror fans, or just movie fans in general. Coming off the high of the end of the year when many of the best studios have to offer drops in theaters and on streaming, the beginning of the year is generally the opposite, filled with the dregs. There’s a great chance that much of your list of the worst movies of the year release in January.

But if there’s an extremely minor consolation to the nightmare we’ve all been living since March of last year, it’s that this will probably not be the case in January 2021. The release schedule has shifted so many times from delays that it hardly resembles past years. Even a few Oscars contenders have a planned release this month with the extended eligibility window.

Let’s take a look at what this rosier January has to offer:

She hasn’t even turned 24 yet and Chloë Grace Moretz has had an interesting career, growing up before our eyes with childhood appearances in movies such as Kick-Ass and Hugo. She’s unquestionably a known actress (and a good one at that!), but she hasn’t necessarily had that career-defining role as of yet. Although in recent years, she’s continued to dabble in horror/thriller roles at a fairly regular clip, so who knows, maybe she’s on the verge of becoming a great scream queen!

Whether or not Shadow in the Cloud becomes the defining movie that grants her such status, it looks like a lot of fun! Boarding a B-17 bomber with an all-male crew and a mysterious package in tow, Chloë Grace Moretz’s Maude not only has to fight off sexist douchebags — but, she also has to fight off a terrifying goblin!

Yes, you read that correctly.

Shadow in the Cloud looks dumb in the best possible way, with high-octane action and thrills. There are most definitely worse ways to start the New Year than giving this one a look.

Shadow in the Cloud will be available on PVOD on January 1st.

Shudder is one of the best curators of original content in the streaming game. Their first original offering of 2021 is Vincent Paronnaud’s Hunted, which is a radical new take on Little Red Riding Hood. Eve (played by Lucie Debay) is on the run in the forest from a group of male captors, when the forest seemingly starts to aid in her defense, as if the mystical forces of nature are on her side.

Paronnaud is known for his animation work, especially with Persepolis, so you may be in store for some fascinating imagery and creativity.

Hunted will be available on Shudder on January 14th.

To be honest, out of all the horror movies coming out this month, Psycho Goreman might be my most anticipated. Siblings Mimi and Luke unearth an ancient alien overlord that was encased within the Earth after failing to destroy the universe long ago. Now he’s ready to finish what he started…

But there’s one catch: Mimi nabs the creature’s magical amulet, which forces him to obey their demands. After quickly naming him Psycho Goreman (“PG” for short, isn’t that cute), the two have their fun with this very annoyed alien, but it isn’t long before some of his alien foes begin showing up on Earth and start wreaking havoc in Mimi and Luke’s small town.

Psycho Goreman looks like it has a bit of everything you could ask for in a horror-comedy: a wink of nostalgia, a monstrous alien paired with adorable children, and plenty of goop and practical effects. What more could you need?

Psycho Goreman will be available in theaters and VOD on January 22nd, with an expected release on Shudder to follow.

You should take notice any time Shahab Hosseini is involved in a project, and that continues to be the case for Kourosh Ahari’s The Night, which promises to be a little more memorable than its title.

After checking in at a hotel for the night (accidental pun), Babak (Hosseini) and his wife find themselves consistently encountering a nefarious force. While the clock turns, the night never seems to end. It seems Babak’s terrors are tied to past trauma, and he must reconcile with it for the night to end.

The Night will be available in theaters and on VOD on January 29th.

The Village in the Woods – January 19th (DVD)