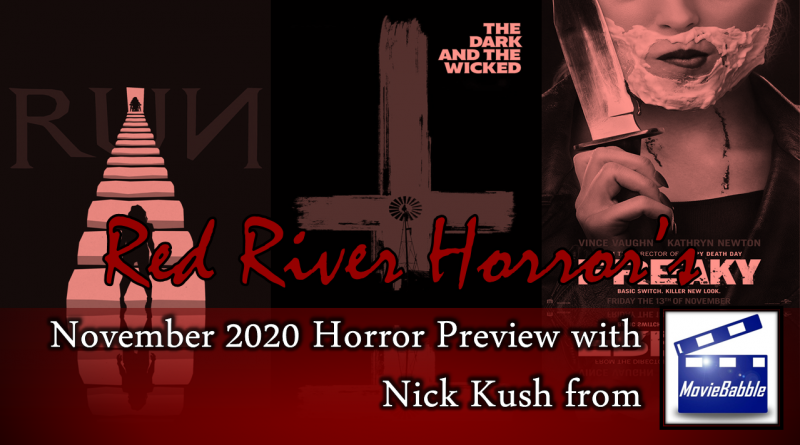 Even though we have finished the spookiest month of the year, the horror train keeps rolling along. November has a few very interesting projects, from a few festival favorites to one film that could be a runaway pop horror hit if all things break correctly.

Let’s have a look at the November 2020 horror preview:

Bryan Bertino’s The Strangers may be one of the bleakest horror movies of the 21st century, with a group of killers breaking into a home and terrorizing a family simply because they were home. The recent critically re-examination of the film is entirely warranted as it skillfully examines the darkest corners of the human psyche while still offering propulsive, exciting slasher horror.

His new film, The Dark and the Wicked, appears to double down on that biting streak of nihilism, with two siblings suspecting an evil force is taking over their family at their secluded farmhouse. The early word on the film is overwhelmingly positive after it played at both the Tribeca Film Festival and Fantasia Film Festival, and many suggest that although it may not be the most actively scary movie you’ll see this year in terms of jump scares and gore, but might be one of the more depressing movie experiences of 2020.

As we enter month nine of a pandemic, perhaps such a film may not be your bag at this moment in time. So, I guess prepare to be covered in a blanket of filth and misery for 90+ minutes if you do decide to check this one out.

The Dark and the Wicked will be available November 6th on VOD.

From Christopher Landon, the director of both Happy Death Day films, comes Freaky, which in many ways seems like a spiritual sequel to Landon’s previous collaborations with Blumhouse.

It’s a really fun concept: a high-schooler named Millie played by the wonderful Kathryn Newton switches bodies with a serial killer played by Vince Vaughn. Vaughn as Millie has to team up with her friends to defeat the serial killer now stuck in Millie’s body. Neat!

Both Happy Death Day movies are more or less comedies wrapped in a slasher premise, and I suspect Freaky will be the same, especially after watching the very silly trailer below. But you have to wonder, why on Earth did Blumhouse and Universal save this movie until after Halloween, when it could have done very well in the lead-up to the spooky holiday?

Freaky will be available in theaters November 13th with an expected PVOD release in the weeks to come.

Aneesh Chaganty’s Searching is better than it has any right to be — it’s probably the crown jewel of the Screenlife subgenre.

His new film, Run, is a more conventional style in terms of filmmaking (i.e. you won’t be staring at a computer screen for 90 minutes), but portends to have plenty of other tricks up its sleeve as a taut Hitchcockian thriller starring Sarah Paulson as a mother caring for her wheelchair-bound daughter who is clearly more sinister than she is letting on.

At only 29, Aneesh Chaganty is already making a name for himself in the industry; if all things go well, Run might be his leap into director superstardom. Early festival buzz indicates this has a very good chance of happening.

Run will be available November 20th on Hulu.