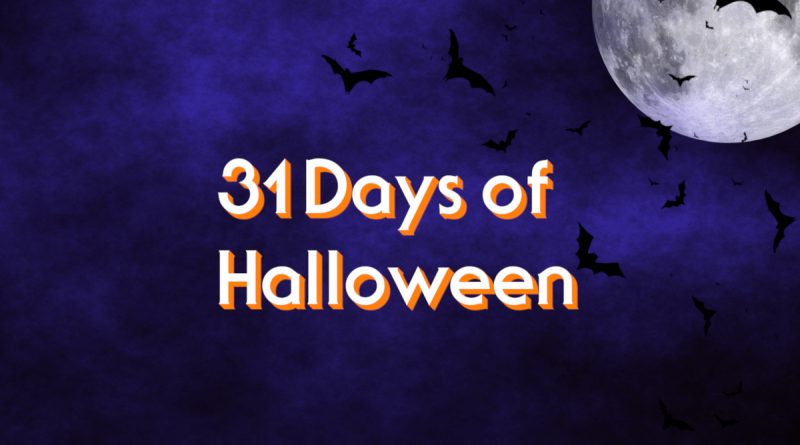 One of the things I look forward to most all year round is cultivating the list of movies I’m going to watch every day throughout the month of October. It’s been a tradition of mine for the better half of two decades, and the act of researching, actualizing, and writing my “31 Days of Halloween” list has become inextricably linked to this ghoulish and ghostly holiday. An October devoid of this monthlong horror movie marathon is an October I’d like to sleep through till November 1, the most dreadful of all the days on the calendar.

Writing this list is a popular activity to partake in nowadays, with seemingly everyone and their dead grandmother making a list and sharing it online with friends and strangers alike. But it’s something I’ve done religiously year after year, inspired initially by AMC’s FearFest and Fox Family’s “13 Nights of Halloween.” This dates back to when you could still find a Blockbuster or a Hollywood Video within a five-mile radius of your house, and often within a stone’s throw of one of those sit-down Pizza Huts that had a waitstaff, lunch buffet, and blindingly red, semi-transparent drinkware.

Devising the list wasn’t so simple in those days. It could take a week or two, if not longer. It required preparation, gasoline, and a little bit of luck. It didn’t matter how long it took, either. In the end, what mattered was giving the list as much time as it needed to evolve, to become the snarling beast you always knew it could be if you just gave it enough space to breathe. A large part of that was, first, imagining your ideal list. Maybe you wanted it to mirror the emotions of living in a haunted house for a month, and thus you stacked your list with films about ghosts and demons. Perhaps you wanted to spend your October walking alongside sadistic murderers, so you conceived a lineup consisting solely of slasher flicks. Or maybe, if you were anything like me, you structured your list so it contained all the sights and sounds and feelings associated with Halloween, making certain that each day perfectly built upon or creatively deviated from the mood struck by the one prior. And you did this all so the atmosphere, both on your screen and in your mind, eventually rose to a crescendo that inevitably exploded on Samhain in an array of oranges and purples and greens.

When you had the feel of the list in mind, you then had to deal with logistics. This could be tricky and time consuming. You had to page through the TV Guide to see what channels were showing what movies on what day and at what time. Often you had to call different video rental shops to see if they even stocked the movie you wanted to rent; as an aside, I don’t remember ever reserving a film far in advance, because this may have turned out to be not only impossible, but fruitless, as someone might’ve wound up snagging the movie you planned on renting a few days before the date it was to appear on your list. No matter the case, you could navigate this disaster by renting a few movies a week, being flexible with the order of your list, and surrending to the idea that you were going to have to pay a few late fees.

As part of this, too, you occasionally had to endure a 20-something-year-old manager at Blockbuster sniggering at you for asking whether the store carried “Frankenstein Meets The Wolfman” before he silently questioned why you were even born. You also had to realize that, in the midst of this chilling ordeal, you were likely going to have to sever a few obligations and potentially destroy a couple of friendships. But, alas, that was a small price to pay for living blissfully in the equivalent of a pumpkin patch for 31 consecutive days.

The best part of the whole process, though, the part I now look back on with such fondness and nostalgia that it almost reduces my entire being to ash, was visiting Blockbuster every year in mid-September. Even the trip there was exhilarating. With the sun disappearing in the sky, I’d drive along a darkening road as I listened to horror movie soundtracks on CD. I’d cruise past houses with tombstone-lined front lawns where pumpkins sat on hay bales and witches riding broomsticks dangled from crooked tree branches, twisting gently in the autumn wind. If I was lucky, when I rolled down my window, I’d feel a chill in the air and discern that particular aroma that appears unexpectedly every fall. It was magical. It was an event. It was, in every sense of the word, an adventure.

Once I arrived at Blockbuster, I’d race toward the horror movie section. There, lining every shelf from top to bottom, were VHS tapes, bewitching me with their viscerally spooky cover art that depicted enough murder and mayhem to make your eyes roll white into the back of your skull. I still possess within me the sensation of standing in that aisle. It’s a feeling I haven’t been able to duplicate, no matter how many times I wander the horror section inside Best Buys and FYEs, looking for films to frighten and transport me to the sweet, deathly state of insomnia.

Nevertheless, after a half hour of pacing down the aisle and scanning the shelves, I’d make a mental note of the films I thought aligned best with the aforementioned Halloween feel I’d concocted in my brain. Then I’d buy some obscenely sweet candy, rent one or two scary movies unrelated to the list, and drive home, content as could be. As I watched the movies and gorged on candy, I’d jot down on a piece of paper the names of movies that caught my eye in Blockbuster. As I did so, I’d sometimes see out of the corner of my eye a dark silhouette fly across the moon.

This list would always balloon to more than 50 or so movies by the end of the September. I’m not ashamed to say I’d ponder this list for as long as a fortnight, waiting for a sudden crack of lightning to awaken my conscious from its resting place in the beyond. When that happened, I’d whittle down the list and grab a blank sheet of paper. At the top, I’d draw bats and jack-o-lanterns and candy bars and skulls, and then, starting at number one, I’d write my list. Before long, my “31 Days of Halloween” slowly materialized from the shadows, and soon its final shape took form.

After that, come the first of October, all I had to do was watch the movies. Night after night, with a glass of cold apple cider in my hand and a bowl of junk food on my lap, I’d stare unflinchingly at my TV screen, transporting myself to a world where the veil between the real and the unreal was blurred to the point of being nonexistent and everything I’ve ever feared was hiding in the darkened corners of my unconscious, ready to send my soul to the underworld. By the time the clock struck midnight on November 1, my incessant need to feel as though for a month I had existed in another universe, one equal parts horrific, surreal, eerie, and enchanting, was finally sated.

Now those days are finished. Today, you can browse through thousands of movies on Netflix and Amazon and select what movies you want to watch, and all in the span of a dozen or so minutes. And once you actually decide to watch a movie, all you have to do is pick up a remote, click a button, and voila. While I ponder this, I can’t help but think that, depressing as it is to do so, the golden days of crafting my “31 Days of Halloween” list are long gone. Now they, like many of the cultural hallmarks from the Halloweens of yesteryear, belong solely to the cemeteries of the past, kept alive only by those wistful enough to lament the passing of a more innocent place in time.

But that’s all right. At the end of the day, the only important thing surrounding all this clamoring is that we participate in this phantasmagorical custom every year. And it seems like more people today are doing so than ever before in the history of monthlong horror movie marathons. That’s a good thing. Concocting these lists flavors the season with pumpkin guts and rotting flesh and candy corn and dead leaves and syrupy, scarlet blood. That’s all that matters, and it’s all that’s ever mattered, really.

Also important to note is that our “31 Days of Halloween” lists appease the gods of Samhain. In exchange for watching a month’s worth of divine terror with the blankets pulled up to our jaundiced eyes, these skeleton-bodied beings who roam the plane of darkness for eternity, with flaming jack-o-lantern heads resting upon their bony shoulders and rusted machetes clutched tightly in their claws, will safeguard us from all that goes bump in the night. But you have to remember to make the list a part of your yearly October tradition as if your life depends on it — because, I’m afraid to say, it does. As you know, these traditions, all of our Halloween traditions, from wearing costumes to carving pumpkins to handing out candy, were started to protect us.