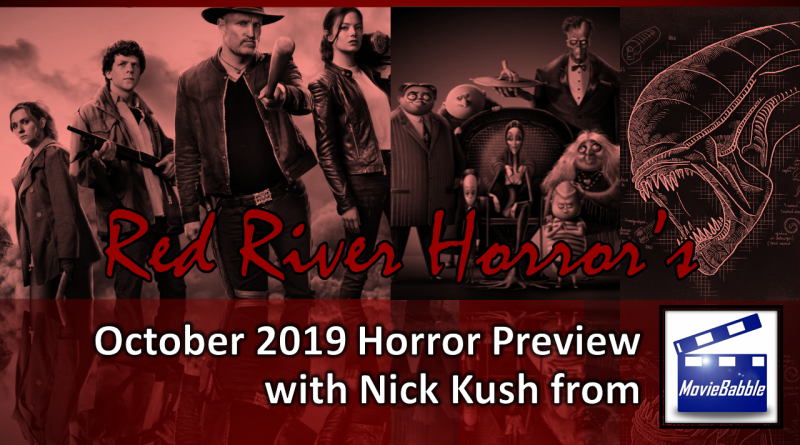 Welcome to October, AKA Christmastime for gorehounds!

Unfortunately, in a weird twist of fate, October 2019 comes without a true-blue horror film, an R-rated scare-fest in the vein of The Conjuring or some other contemporary horror franchise. Perhaps our bloody Christmas came earlier this year with It Chapter Two‘s release last month, or we’re in a holding pattern until Doctor Sleep hits theaters in November, making studios a bit gun shy with the release of their own horror properties. Whatever the case, it’s a bit of a bummer, isn’t it?

Nevertheless, October will continue on, and so must this October 2019 horror preview. Hopefully these horror-adjacent films can intrigue you between re-watches of all The Nightmare on Elm Street films as you gear up for Halloween:

The Xenomorph has been mined for plenty of content over the years in many movies, but we get an in-depth look at its creation in the documentary Memory: The Origins of Alien.

The doc focuses heavily on the archives of both Dan O’Bannon and H.R. Giger, revealing never-before-seen footage and materials such as original story notes, rejected designs and storyboards, behind-the-scenes footage, and, most importantly, a look into O’Bannon’s original script from 1971, entitled Memory.

Both O’Bannon and Giger are endlessly fascinating figures, and in combination with looks into Greek mythology and other areas of inspiration for the classic horror film, Memory: The Origins of Alien is primed to be a favorite among fans of the franchise.

The Addams Family is going animated in the film with the same name. Intellectual property continues to run Hollywood like the purest gold nuggets you could find. It’s invaluable when marketing to the masses.

In this case, however, the soft reboot makes sense. Animation could allow for the macabre-tint that has always enveloped The Addams Family to go to new slapstick heights. Whether you’re interested in that kind of Addams Family is an entirely different discussion. But with veterans Conrad Vernon and Greg Tiernan as directors working with a supremely talented voice cast, The Addams Family should find an audience, even if it skews a bit younger this time around.

Is anyone excited for Maleficent: Mistress of Evil? No? Okay, moving on!

The main attraction for many in October will be Zombieland: Double Tap, which reunites the main cast once again for another round of silly mayhem. As we know by now, Sony has a spotty record with attempting to resurrect whatever properties they have left, but with Emma Stone, Woody Harrelson, Jesse Eisenberg, and Abigail Breslin returning, there has to be some magic left, right? Consider me cautiously optimistic, with extra emphasis on the “cautiously.”

As for us fans of arthouse cinema, look no further than Robert Eggers’ The Lighthouse, his follow-up to the critical darling The Witch. The film is a two-hander with Willem Dafoe and Robert Pattinson going absolutely nuts as foul-mouthed sailors in isolation on a rocky shore. I’m all in for A-list actors going full crazy — especially with fittingly over-the-top accents — and Eggers looks to provide plenty opportunities for his actors to do their thing. Since its debut at Cannes this year, The Lighthouse has been touted as a twisted, funny, and beautifully strange experience. You probably know already whether or not this movie is for you, but you certainly won’t want to miss it if it’s in your wheelhouse!