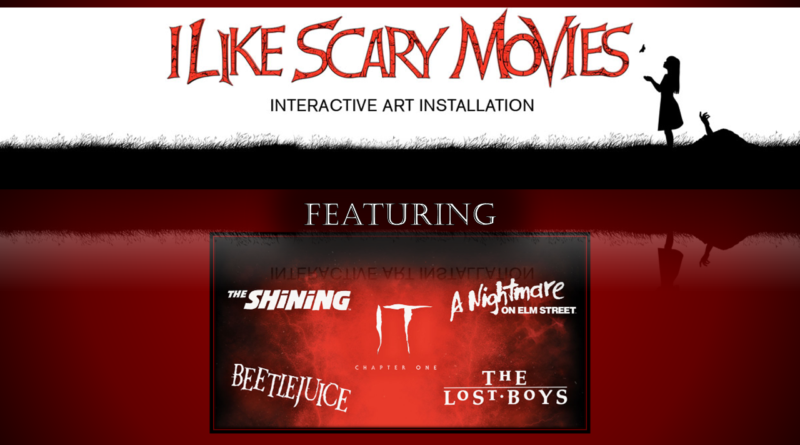 Inside Look At The Coolest Pop-up Photo Op in L.A.

Have finger-knives, will travel! But for now, the much-anticipated I Like Scary Movies exhibit is only in L.A. (and only through June). ILSM is a groundbreaking interactive art installation celebrating some of our favorite films, including the first chapter of IT, The Shining, The Lost Boys, A Nightmare on Elm Street and Beetlejuice.

• Come play with us! “Sink” into the infamous carpet from The Shining’s Overlook hotel and explore “redrum” hedges. Swallow your fear as you pass through the jaws of IT’s Pennywise and explore the clown’s sewer lair. Have a seat in the throne of Freddy Krueger and step into his boiler room to become snatched by his giant glove from A Nightmare on Elm Street. Then have a turn as recently deceased guests in the Netherworld waiting room before visiting Beetlejuice’s graveyard. Test your strength as you hang from the Santa Clara train tracks before becoming part of a “noodle” dinner from The Lost Boys. These are just a few things that fans will interact with on their way to the Gift Shop at the end of the journey, where they have exclusive merchandise for you to take a part of your experience home with you.

• The exhibit does not feature “scare actors” or strobe lights.

Don’t miss out on the first stop of the tour, open now in Los Angeles. Tickets are $39 each through ShowClix.

The ILSM experience is brought to life by Maximillian, the celebrated experiential artist behind several Hollywood studio activations over the years, including cool exhibits at Comic-Con, where he and his team recreated the Snakes on a Plane fuselage and the Pirates of the Caribbean Black Pearl shipwreck for fans to explore. Now he’s in the pop-up space, and we have got to say: it’s impressive.

The attention to detail, not to mention obvious love to the genre, is stunning. For instance, in the room where the blood-elevator from The Shining is recreated, when you look closely at the red gore, you’ll see each one is actually a key card for Room 237. The mountain of madness from Pennywise’s lair is made of hundreds of children’s toys, tiny shoes, electronics, random items, and gaping mouths that you can look through from either side of the teeth. There’re also places where you can reach into the mound and… well, we hope you’re not squeamish!

Our own Staci Layne Wilson got a chance to check it out before it opened to the public, and took tons of pics. What do you think? Will you attend?

Check out all the images as they come in daily on Instagram at I Like Scary Movies Experience.