If you have ever faced the complex conundrum of wanting to watch an old familiar horror movie but also wanting to watch something new, consider Nick Sanford’s The Harvesters. A short visit with the anxious director fleshed out this cryptic labor of love that harkens back to the days of movies like the original Halloween or The Omen.

It is the story of a journalist named Jane (played by Alissa Rose) who becomes involved with the mystery of missing locals and bizarre murders, on the heels of her desire to abandon her home town. The mystery grows into something darker and larger than she could have suspected.  The film stars Rose, Laurie Cummings, Adam Hampton, and Sidney Flack.

Sanford speaks about his movie with a realistic attitude. He does not bash his work, nor does he praise it. He points out the atmospheric approach and how the ending really brings together all of the elements. In almost the same breath, he debates with himself if the theme (dreams versus responsibilities) of the movie overshadows the horror or if parts of it were “scary enough.”  It is this balanced view that causes the movie itself to accomplish much of what it set out to do.

Inspired by the destruction of the Moore, Oklahoma tornadoes, Sanford fashioned a tale that carried the moodiness of Moore citizens after the tragedy. The characters are all shuffling around in what feels like a civilized wasteland, trying to rebuild from a rough history that our heroine slowly uncovers. He also references the struggle with audio and the decision to go with stereo sound. However, this only adds to the retro feel of the movie. Being a sharp fellow, he turns this into a selling point by promoting the sound on the poster as any good 70’s movies poster would have. 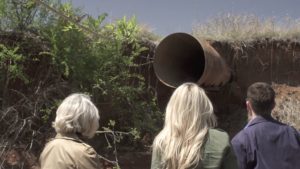 The Harvesters manages to do what 2009’s House of the Devil did, in that it perfectly emulates the best parts of 70’s horror.

It draws in viewers who want more than cheap jump scares, adding relatable drama and the fear of the unknown to keep audiences holding their breath. The direction and cinematography show knowledge of the craft, allowing it to showcase some really hypnotic performances.

During the interview, he talked about the life of The Harvesters and his hope for the film- to find its audience. There is little doubt that this movie’s audience is out there and that they need to seek this movie. It is more than a nod to some of horror’s greatest classics, it is a solid piece of film that stands on its own.