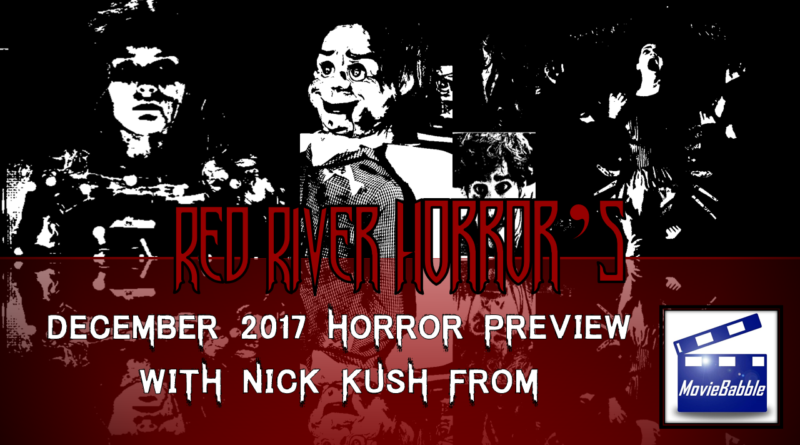 December is normally a time for love and cheer, but there is always room for some bloody goodness during the holiday season.  While there is no shortage of Christmas-themed films going around, the last month of the year always offers some counter-programming for horror fans to continue the fun through the new year.  Here is your December 2017 horror preview:

After watching Slumber, you may not want to go to sleep that night.  The film follows a sleep doctor who realizes that a family is being terrorized by a demon that feeds on the weak in their sleep.  The doctor is forced to confront the demon, and also stand up to her past fears.

Psychopaths tells the story of a group of serial killers that go on a killing spree after a madman is executed via the electric chair in a prison.  As the night wears on, the body count continues to rise.

If those two films don’t do it for you, try Inoperable.  This scary flick follows a young woman who wakes up in a hospital as a hurricane is approaching.  The woman is also stuck in a time loop caused by some nefarious force, threatening her ability to escape, unless she can break the curse.

Lastly, for fans of the horror-comedy genre, Another WolfCop may be the film for you.  The sequel to 2014’s WolfCop once again follows an alcoholic cop who turns into a werewolf under a full moon.  However, this time he’ll have to face a more worthy adversary.  This film is destined to be the wackiest of the entire December 2017 horror preview.

All of these films will be in limited release.

The Crucifixion offers a twist on the typical exorcist story.  After a priest is imprisoned for murdering a nun, a journalist investigates whether the priest actually murdered her or if he lost a battle with a serious demonic presence.

Better Watch Out is a Christmas-themed home invasion film that follows a babysitter attempting to protect two children.  However, the film’s promotional material teases a twist that hints that this may be more than just a run-of-the-mill home invasion horror…

For those that love the Chucky franchise, Doll Master is the film to look out for.  A child’s favorite doll disappears, leading him to discover the terrifying truth of a local system of tunnels and the secrets within them.

We all love Santa and Mrs. Claus, but Once Upon a Time at Christmas spins these characters in a completely different light.  In this case, these two are serial killers running around town, killing innocent people left and right.  The acts force a local woman and a cop to come together to solve the crimes before something far worse occurs.

K-Shop is a deranged feature for fans of cannibalism films.  After an altercation in a store goes wrong, our main character disposes of the body in the only place that seems safe- the food!  As you can imagine, things only get worse from there.

For those who aren’t fans of the current political climate, Ratpocalypse certainly has a lot to say.  A senator warns the public that corruption will turn everyone into their “true form,” which is, of course, rats!  There are sure to be other political jabs thrown into the final product as well.

Desolation should fill the void for slasher fans this holiday season. A trio of hikers must evade a deranged killer in the woods or else meet their ultimate demise.  The film will be available immediately on VOD.

In addition to new releases, there are also some horror favorites from earlier in the year that will become available on various platforms, making for an even more crowded December 2017 horror preview.