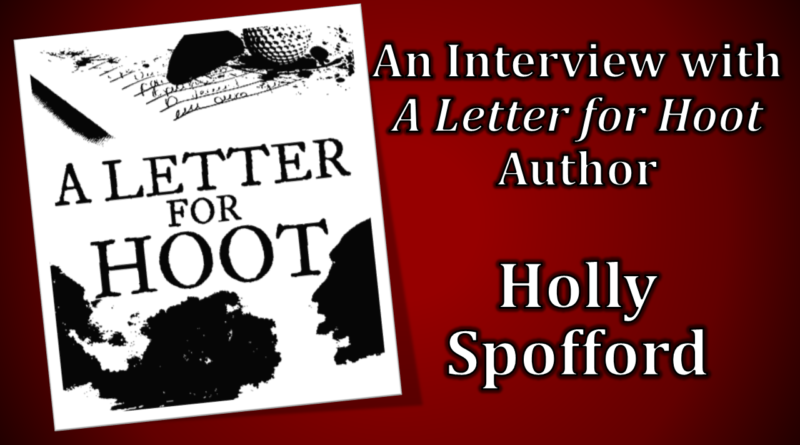 It may be genre-bending, but it was important to kickoff the “Books” section of Red River Horror. Luckily, author Holly Spofford, a resident of Wayne, PA (just outside of Philadelphia) took the time to answer some questions about her debut novel A Letter for Hoot. The book was released toward the end of 2017, and Spofford is now touring the area’s bookstores and libraries in support of this exciting new entry in the Murder-Mystery genre.

As many Red River Horror readers know, I am producer of a golf radio show and television show on NBC Sports here in Philadelphia. A Letter for Hoot is about solving a murder that takes place in the fictional town of Cab Station, Virginia — a golf community! Naturally, featuring this novel first is a fitting blend of two things I love; golf and scary stories. And while most of the “scary” parts of this story take place in the very beginning, I still came up with 10 questions for the Philadelphia area-based Spofford on her debut novel.

EC: “Holly, thanks for joining me. I’m excited to talk about your brand new book A Letter for Hoot…so let’s get started! What was your writing process like, and how did it change as you approached the final edits of the book?”

HS: “I believe the writing process is personal and I have figured out what works for me. Part of my process is to make sure that what I write is not forced or contrived, but natural. I write everyday, yet the time I spend writing varies. I may write for only twenty minutes one day, and then three hours the next. I am not one to say, ‘I’m going to get up at 6:00 and write for seven hours.’ I work more productively without a set writing schedule. I want my books to be authentic and enjoyable, so I go with what I can do on that day. My writing process is composed of several pieces. I use a large white board to map out my time line, connections between characters, and events of the plot. I develop/write about my characters in an ‘old-school method in that I use a black and white marbled composition book which many of us had in school. I write their names, descriptions, jobs, in that book and revisit it as changes in my characters develop. I have an excellent editor who helped to shape the story. Therefore, as I approached the final edits, I made sure that I stuck to my process with which I began. I knew what worked and what didn’t work with regard to character/plot development, so if anything changed, I focused on the ending to give the reader the thrill of ‘Wow! I never saw that coming!’ Who doesn’t love that feeling!”

EC: “Did you consider writing under a pseudonym to start, as many authors have done when publishing their first novel?”

HS: “I did not consider a pseudonym. Holly Spofford has a nice ring to it.”

EC: “How long did A Letter for Hoot take to write?”

EC: “You were an English teacher for nearly 20 years, as well as a coach for both boys and girls sports for 25 years. In A Letter for Hoot, that experience teaching kids of a younger age has paid off, as it is very easy-to-read, but maintains the twists-and-turns an adult expects when reading this type of story. Will this style, regardless of subject matter, be ‘your style’ moving forward?”

HS: “Thank you for that wonderful observation. Yes, that is going to be my style. When I taught, I observed very quickly that my students would lose interest in a book or become frustrated if the vocabulary was too mature or difficult. Therefore, when I set out on this journey, I wanted to write a book that was easy to read with everyday vocabulary, especially since I knew kids were going to read it. Equally important too was including the twists and turns because it keeps/kept my readers guessing. Readers like characters who are relatable and they like to engage in stories that contain red herrings/twists and turns because it makes them think.”

EC: “What type of books or stories do you like to read?”

HS: “I enjoy a variety of genres: suspense, thriller, mystery, comedy, drama. I love suspense/mystery because they make me think and deduce who is the perpetrator. But I also love books that make me laugh out loud. I admire writers who have that ability. As an example, I have read many of David Sedaris’ books and loved them. He is hilarious.”

EC: “Are there any specific authors you would name as favorites of yours?”

EC: “When a reader first picks up A Letter for Hoot, I think they’ll notice two things immediately; your love for golf, and your love for cars. Clay, the Club Champion in your story, drives his prized Jaguar XKE. You often speak of your father’s antique 1937 LaSalle that you drive to the golf course. In the horror genre, fans of both novels and stories on the screen take their cars very seriously. Christine is an evil 1958 two-tone (red and ivory) Plymouth Fury and the star of Stephen King’s 1983 novel of the same name, made into a film that same year by John Carpenter. ‘Baby’ in the television show Supernatural is an all black 1967 Chevy Impala. Although the latter is not evil, it’s an important character in the show. What car specifically will you bring to the pages of your next book?”

EC: “Red River Horror is of course a site dedicated to the genre, so I have to ask — What is the scariest story you’ve ever read?”

HS: “Oh boy. I remember reading Alien when I was in fifth grade. I was with my grandparents flying to California and I distinctly remember not wanting to read the next page where that creature pops out of the guy’s chest. But of course I continued reading and was terrified. That scared the DAYLIGHTS out of me. Then I was dumb enough to watch the movie! Cujo did a great job of scaring me too.”

EC: “What is the scariest movie you’ve ever seen?”

HS: “There are many….I saw Invasion of the Body Snatchers starring Donald Sutherland back in the early ’80s and that scared me to death. Plus, those pods that hung from the trees were so gross. Classics, like The Exorcist and The Omen scared me plenty. I remember watching them through my fingers because I had to cover my eyes. Oh, does An American Werewolf in London count?! And laugh if you will, but War of the Worlds with Tom Cruise scared me too. The noise of those aliens when they attacked was SO well done because it was terrifying.”

EC: “There are some interesting names in A Letter for Hoot. NT, BB and yes, one of the stars – Hoot!  These are abbreviations and nicknames, but that is how these characters are referenced throughout the tale. How did you select the names of your characters?”

HS: “If you mean the primary characters, I took the logical root as they are family names. Mimi and BB are my parents and their real names are Molly and Bill. They are called Mimi and BB by their grandchildren. I figured their nicknames were easy to remember and easy to type. NT is a combination of family members. My brother was Nicholas. And we have three Tuckers: my Uncle, cousin and nephew. Plus, I love the name Tucker. Daisy is a name with such character and sass, so I couldn’t resist that. And it’s a name you don’t hear often. Hoot is a great nickname for a caddie, so that stuck. In fact, that’s the first name I came up with at the start of my book. As far as the other names, I made up many of them based on what they looked like in my imagination.” 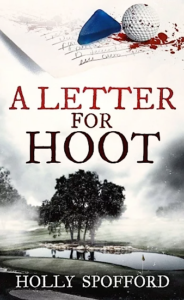 A Letter for Hoot is available on paperback at retailers like Barnes and Noble, and can be purchased online at Amazon.com. A Kindle version is also available.

Synopsis: The murder of one of Cab Station’s own rocked the residents of the town, but the case soon goes cold and is apparently forgotten for decades. That is, until Nicholas Tucker Tyson—NT, for short—and his friend Daisy learn the identity of the victim. They start their own investigation, adamant that justice must be served. They track clues and interview people who knew the victim well, only to end up with more questions than answers. Along the way, they befriend Hoot, who unknowingly holds the key to solving the mystery. In between golf practice, basketball challenges, and trips to the ice cream parlor, NT and Daisy relentlessly search for the truth. In the end, their beloved town of Cab Station is rocked once again as deep secrets are finally revealed.