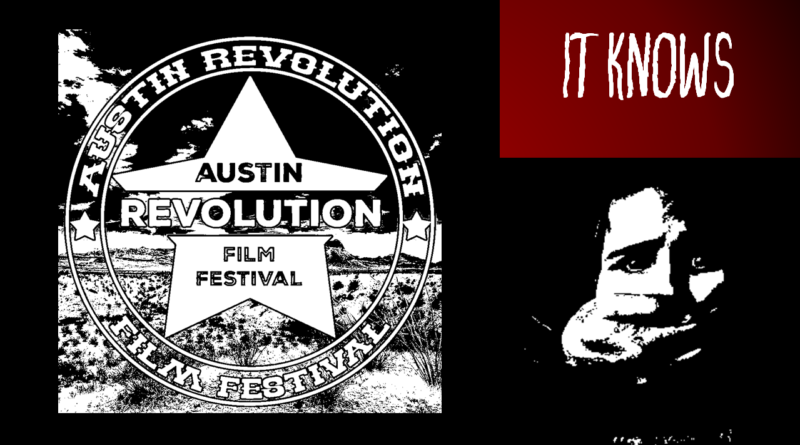 It Knows opens with a scene of family terror. Young Claire and her mother are hiding from Claire’s father Monroe, who is a monstrous figure in her life. When he eventually finds them, his rage is unleashed and only Claire survives. Years later, Claire is happily married to an understanding and caring man, and they have two beautiful children. But she finds herself trapped in her house by a mysterious force, and her family is nowhere to be found.

Claire is shattered.  She is a woman unmoored from reality by her brutal childhood. The puzzle-piece structure of It Knows reflects Claire’s fragmented existence; she opens a door to the outside and finds herself back in her house, unable to escape; she turns a corner and finds a masked specter confronting her with her deeply buried pain; and finally, she is led further down the spiral of depression and mania by her younger self until she is unable to avoid facing the truth of her past, and must take action to protect herself and her family from the growing evil that surrounds her.

It Knows is a dark psychological horror that goes places many will find disturbing. And yet, it is also a frenetically paced survival horror with shocks and scares aplenty. These two horror sub-genres are blended seamlessly by co-writer/directors Mark Maness and Rob Winfrey, and are given life by the strong performances of Carmen Patterson as the desperate adult Claire, Dan Michael as the sinister and brutal Monroe, and, most of all, the outstanding performance of Lauren Lasseigne as the terrorized nine-year-old Claire. It is her scenes in particular that can be tough to watch, but those that do will find themselves challenged by a harrowing narrative that pulls no punches in exploring its deeply emotional territory.